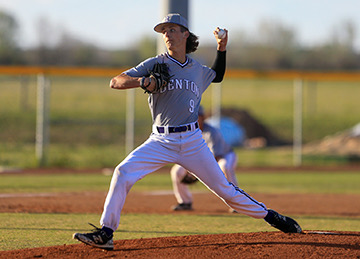 Benton defeated Byrd 5-2 at Benton. The Tigers won the first game by the same score Tuesday.

At Benton, Bryson Pierce pitched a complete game with 12 strikeouts. He also drove in a run.

Brady Blaylock got the Tigers on the board with an RBI-single in the first. Kenner Lauterbach drove in two runs in the second.

All the scoring was done in the first three innings.

Benton is scheduled to begin a series against Captain Shreve at 1 p.m. Saturday at Shreve.

At Airline, four Vikings had two hits. Carson Carey went 2-for-4 with a double and two RBI.

Caden Long had a double.

Waxley allowed four hits and no runs in five innings of relief. He struck out four and walked three.

Airline hosts Florien Friday then begins a series at Parkway at 1 Saturday.

At Parkway, four Panthers had two hits. Zach Schoenborn went 2-for-4 with a double and two RBI.

Cade Josting had a triple, and Barrett Newman had a double.

At Captain Shreve, the Bucs outhit the Gators 6-5 but couldn’t capitalize on some early scoring opportunities. Errors also hurt.

Starting pitcher Austin Anderson went 3-for-4 with a double. He allowed five hits and two earned runs in 4 1/3 innings. Landon Gaby struck out four and didn’t allow a hit in 1 2/3 innings of relief.

Haughton is scheduled to open a series against Southwood at 1 Saturday at Haughton.

Elsewhere, Plain Dealing rolled past Ringgold 13-3 in a District 1-1A game at Plain Dealing. The Lions are scheduled to host Homer Friday.