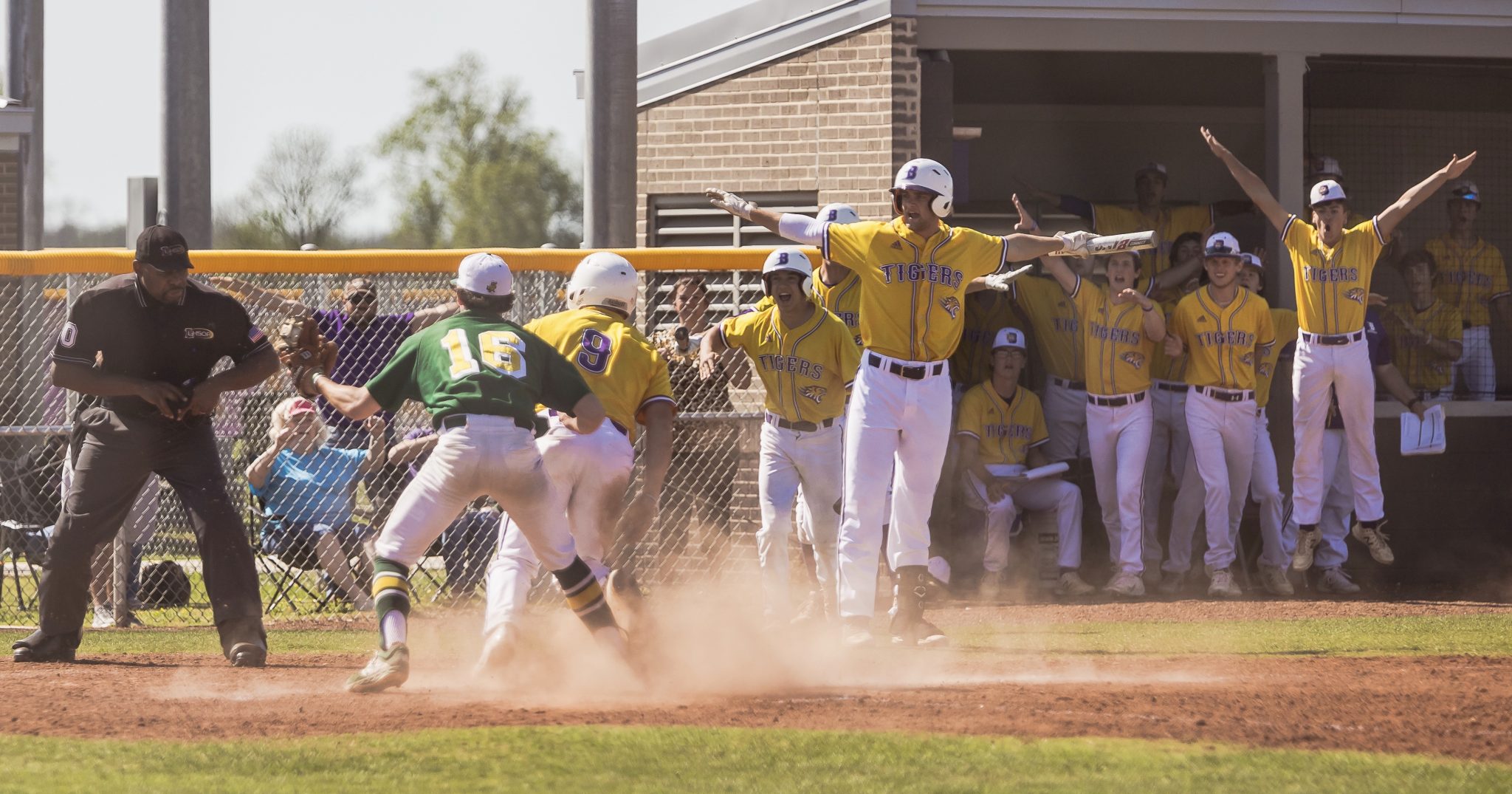 In the other 1-5A game, Byrd edged Natchitoches Central 6-4 at the Yellow Jackets’ field at LSUS.

At Benton, the Tigers rallied from a 3-2 deficit with three runs in the bottom of the sixth.

After the first two batters struck out, Pearce Russell and Jack Walters got things started with back-to-back singles.

Clint Lasiter brought home Russell with a single. Dane Stearns was hit by a pitch to load the bases. With Grayson Gates batting, both Walters and Lasiter scored on the same passed ball to make it 5-3.

The Gators led off the top of the seventh with a single. But Grayson Mims induced a ground ball to second baseman Walters, who threw to Lasiter covering second. Lasiter fired to Russell at first to complete the double play.

Mims then got a strikeout to end the game.

Lasiter and starting pitcher Brock Van Hoy both went 2-for-3. Gates had a double.

Van Hoy went 5 2/3 innings. He allowed six hits and struck out five. Mims got the win.

The final game of the series is scheduled for 6 p.m. Tuesday at Shreve.

At Southwood, Colin Rains went 3-for-3 with two home runs and seven RBI.

Rains had a three-run shot in the Bucs’ eight-run first. His two-run blast in the second gave Haughton a 10-0 lead.

Austin Anderson hit a solo home run. Carter Griffin led off the game with a triple. Chandler Lytle had a double.

Anderson went three innings for the win. He didn’t allow a hit or walk and struck out five.

The series is scheduled to conclude at 6 Tuesday at Haughton.

The Vikings tied it with two in the bottom of the sixth on a Keegan Lehr walk followed by singles from Matthew Scripture and Harrison Waxley.

The Panthers regained the lead in the top of the seventh. Brandon Levy led off with a double, advanced to third on Trenton Lape’s sacrifice bunt and scored on an errant pitch/dropped third strike.

The Vikings tied it in the bottom of the inning. Leadoff batter Mason Morgan was hit by a pitch and advanced to second on Triston Hargrave’s sacrifice bunt. Tyler Ferguson’s two-out single scored Morgan and the game went into extra innings tied at 4.

Parkway put six on the board in the top of the eighth.

Hunter Holder led off with a double and advanced to third on a wild pitch. Barrett Newman walked to put runners at the corners.

Levy walked with one out to load the bases. Lape then drove in the first run of the inning with a single. Brady Norcross and Trenton Defatta had back-to-back singles to make it 9-4.

Parkway starter Lape allowed four hits and struck out seven. Waits induced three groundouts in the bottom of the eighth.

Norcross went 3-for-4 with three RBI. Waits and Newman also had three hits each. Defatta had two RBI.

Airline’s Carter White went seven innings. He allowed 11 hits but kept the Vikings in the game by getting out of several jams.