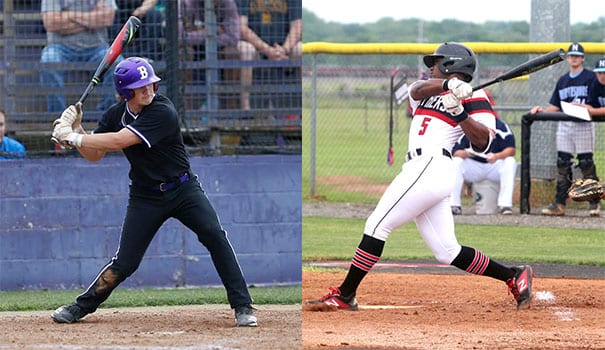 The Benton Tigers and Parkway Panthers are one win away from a chance to play for a state championship.

Both teams are in Sulphur for the Allstate Sugar Bowl/LHSAA Baseball State Tournament at McMurry Park.

But that game along with the rest of the state tournament schedule for 4 p.m. games and after has been cancelled for Thursday because of inclement weather. As of early Thursday afternoon, a new schedule had not been announced.

Tioga has won 29 straight since losing its first five games. During that stretch, the Indians have won 27 by at least three runs.

Blake McGehee and Peyton Forester were the winning pitchers for Tioga against Salmen.

McGehee allowed three hits in eight innings in the 4-1 victory. Isaac Williams hit a walk-off three-run homer in the eighth.

McGehee and Forester are also both capable hitters. Terrence Grines had seven hits in the two games. Rylon Ganey has hit two home runs in the playoffs.

Benton has won 15 of its last 16 games and 26 of its last 28. Every Tiger in the lineup had at least one hit in Sunday’s sweep of West Ouachita.

Pitchers Landon Joyner, Brock Van Hoy, Sam Simmons, Dane Stearns, Cameron Ross and Grayson Gates have all done their part to get the Tigers this far.

Both Parkway and Sam Houston are looking to end long state title droughts.

The Broncos have reached the semifinals the last two seasons, falling to eventual runner-up Sulphur 4-3 last year and eventual champ Central 4-1 in 2017.

Duhon had five hits and Meeks four in the quarterfinal series.

Meeks (9-0) allowed two hits in six innings and struck out eight in the 8-5 victory over Destrehan. He entered the series with a 0.44 ERA.

Sam Houston was the runner-up to Barbe in District 3-5A. The Broncos split their district games with the Bucs, losing 3-0 and winning 10-3. A loss to Lafayette prevented them from sharing the district title.

Senior third baseman and pitcher Eric Brown, a Coastal Carolina signee, has had an outstanding season.

But the Panthers are similar to Benton in that everyone has contributed to the team’s success.

Knotts and Rayner were the winning pitchers in the quarterfinal series. Knotts and Parker Stevens were the winners against Airline. Lewis and Drake Fontentot have also been on the mound in the playoffs.

Hunter Holder and Cade Johns have also done their part on the basepaths.

Parkway coach David George said the Panthers’ success has depended on everyone stepping up when called upon. If one player is having an off game, then another will step up.

“We talk about this all the time with the players and stuff,” George said after the sweep of Northshore. “We talk about team and we talk about family. This is a team. They have fun. I think that’s the key to us. They have a lot of fun playing together.”

Both the Panthers and the Tigers are hoping they’ll get a chance to play together one last time on Saturday.