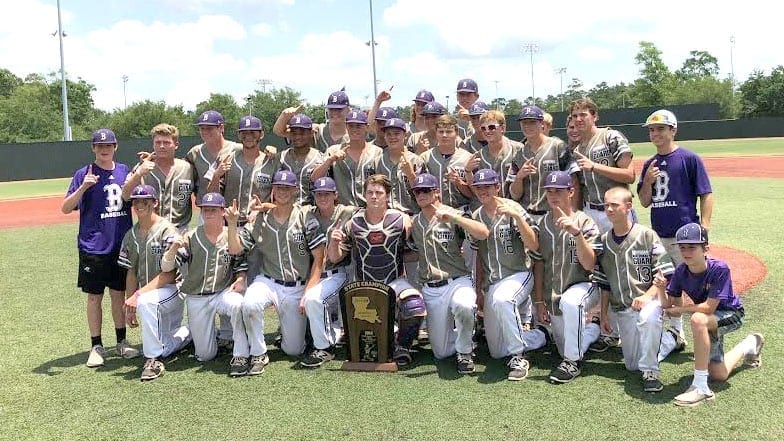 When the Benton Tigers completed their remarkable playoff run Saturday, defeating the DeRidder Dragons 13-2 in the Class 4A state championship game in Sulphur, thoughts of past teams and players went through head coach J.D. Stephens’ mind.

Benton had reached the quarterfinals the past five seasons, failing to advance each time.

“They are some of the first people I thought about when we won,” Stephens said. “Those kids — every one of them in the seats down there rooting us on — the same thing I told every one of them when I saw them is they were a big part of the foundation. They had the same goals as this group and put in the work to show these guys how to practice every day. Their legacy is a big part of this success we were able to experience.”

Senior second baseman Garrett Hable, who had three hits, also feels like the past Tigers are part of the state championship.

“We’re still tight with all our former players, and we just felt like we needed to do something for all the former players and we were glad we were able to do that,” Hable said.

A four-year starter at quarterback, Hable has been part of multiple district championships in baseball and football. The state championship caps an outstanding high school athletic career.

“It’s definitely amazing,” he said. “In football we thought we were going to be able to go far and do these things, but we fell short. And I told the baseball guys I didn’t want to go out like that. It’s great to be able to end my senior year on a high note.”

“It’s great,” Stephens said. “I’m proud of these kids and how hard they worked for it.”

The state championship is the first in baseball in school history. Benton was the Class 3A runner-up in 2007.

“It’s an unreal feeling,” said senior first baseman Peyton Long, who had three hits. “It hasn’t sunk in for everybody. We’re still kind of … I don’t know — it’s hard to put into words how excited we are for the program and for the whole team.”

“We’re pumped,” said senior shortstop Cody Norris, who also had three hits. “We’re just glad we could go out with a bang. It’s a good thing to end the season on a win instead of a loss. I think the big part of the winning is we never gave up. Even when we got behind we just kept fighting. That’s why we won.”

One strike away from elimination in the semifinals against No. 5 West Ouachita on Friday, Benton scored three runs in the top of the seventh and won 6-5.

“(It’s) chemistry all the way,” said senior pitcher Andrew McPherson, who pitched six innings against West Ouachita and went 4-0 in the playoffs. “It didn’t matter what situation it was. We trusted each other. Like yesterday (against West Ouachita), two outs, two strikes, bases loaded. Everybody had faith in JT (Brice) and the guys on base to get the runs that we needed to go to the next inning. We trust each other 100 percent.”

Unlike the semifinals and several other games in the playoffs, the state title game lacked drama, especially after Benton put seven on board in the top of the third.

Benton had 19 hits to DeRidder’s four. Turner Toms turned in his second outstanding effort in the playoffs on the mound, pitching a complete game. He struck out nine and didn’t walk a batter.

As has been the case during the playoff run — and all season — every player contributed to the victory. Eight Tigers had multiple hits.

“It’s been a year of the step-up,” Stephens said. “Even today, Turner Toms pitched his tail off and everybody in the lineup had a hit, and everybody in the lineup played their role. It was an all-around team effort that made this moment a lot easier than the rest of the playoffs have been. The work definitely doesn’t go unnoticed. These kids put themselves in this position with the work they’ve done all year.”

Long, who went 3-for-5 with an RBI, said while they may not have expected to get 19 hits and score 13 runs, the Tigers were confident going into the title game.

“We didn’t really know a whole lot about them,” he said. “We knew they had a couple of arms and what they had is what we hit best off of so we were pretty confident going into the game.”

Stephens obviously didn’t expect such a big offensive output, either, but he also thought the Tigers had a good chance to score some runs.

“DeRidder is a great team,” Stephens said. “The kid they threw in the semifinals (a 3-0 win over No. 31 Westgate) — a left-hander, unbelievable — but we knew obviously we wouldn’t see him in the championship game.

“The scouting report that we got on the (pitcher) we were going to see, we thought we matched up very well with him as long as we could stay aggressive in the strike zone, which our guys did. We didn’t chase pitches out of the zone. Easier said than done, but we did feel like we were in a position to do that. To just go out there and put up an eight-run lead early, it was easy for Turner to settle in the strike zone.”

While he didn’t have a hit, Brennan Blaylock drove in two runs. Blaylock was one of many Tigers who came through with clutch hits earlier in the playoffs.

Already leading 1-0, Benton erupted in the third inning. Thirteen Tigers went to the plate and nine had hits.

“It was unreal,” Long said. “It was just one thing after another. We just felt like it was all clicking. All the hard work finally paid off in that one inning to get us a win. We weren’t settled but we knew we had a great chance to win after that one big inning because the momentum was definitely in our favor.”

The onslaught started with four consecutive singles by Norris, Horton, Long and Hable. A Blaylock fielder’s choice to shortstop made it 3-0. Simmons’ triple scored Hable.

An error on a Brice grounder with two outs allowed another run to score. Lasiter and Scott followed with back-to-back doubles. Norris then singled to right field. After Horton walked, Long hit a line drive to right field, scoring the final run of the inning.

“We came out swinging it today,” Norris said. “We kind of fed off each other. We just kept going. It was a good rally.”

The Tigers took a 1-0 lead in the top of the second. Simmons drew a two-out walk, advanced to second on a Brice single and scored on a Lasiter single.

DeRidder got on the board in the bottom of the third inning on a two-out solo home run by Cameron Lejuene. The Dragons scored what would be their final run on a two-out double by Lane Neely in the fourth.

The Tigers didn’t let the Dragons grab the momentum, though, tacking on three more in the top of the fifth.

Lasiter led off with a walk. Scott and Norris hit back-to-back singles to load the bases. Horton was hit by a pitch, scoring Lasiter. Hable drove home Scott with a one-out single. Blaylock’s sacrifice fly scored the final run of the inning.

Benton scored two more in the top of the seventh. Long and Hable started things off with back-to-back singles. Simmons scored pinchrunner Walters with a one-out single to left field. Brice’s sacrifice fly scored Hable with the game’s final run.

The Tigers ended the game emphatically. The Dragons got a one-out single, but the runner was thrown out by Horton trying to steal second.

Toms struck out the final batter, and history was made.