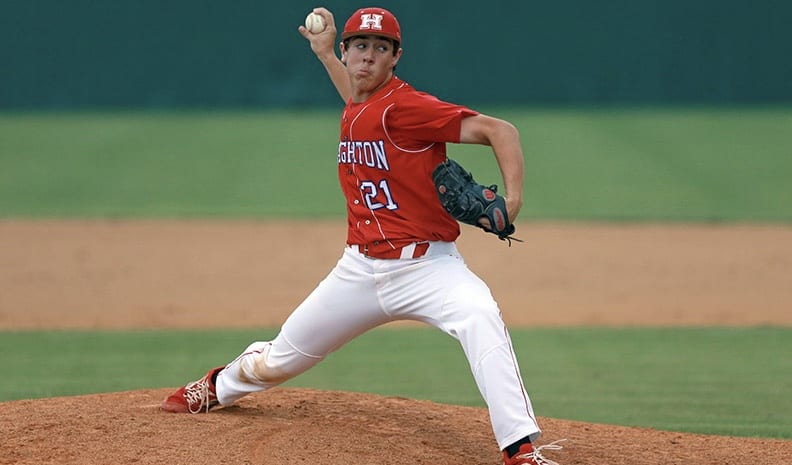 The Haughton Buccaneers are the only Bossier Parish team still alive in the playoffs.

Haughton, the No. 8 seed, swept No. 24 Captain Shreve 7-0 and 4-1 Saturday at Haughton to win their best-of-3 Class 5A second-round series two games to one.

Benton closed its first full season in Class 5A 27-7.

At Haughton, the Bucs limited the Gators to one hit in the first game.

Anderson and Chase Keith both had big games at the plate.

Roman Tolbert had two RBI. Nick Hensley had a double.

Keith and Anderson had back-to-back singles in the top of the second. (Haughton was the designated “visiting” team in the first game.)

Tolbert grounded into a fielder’s choice and Keith scored.

The score remained 1-0 until the sixth when Haughton put four on the board. The Bucs scored all four with two outs.

Haughton added two more in the seventh, scoring both with two outs. Rains singled and scored on Hensley’s double. Anderson brought home Hensley with a single.

Starter Caleb Brown allowed just two hits and walked only one in 5 1/3 innings. Anderson didn’t allow a hit in 1 2/3 innings.

After three scoreless innings, the Bucs scored one in the bottom of the fourth. Peyton Stovall singled, stole second and scored on a single by Rains.

Haughton tacked on two more in the fifth. Leadoff hitter Tolbert drew a walk. After Akana got the next two batters out, the Bucs loaded the bases on a Carter Griffin single and Stovall walk.

Rains then drew a walk with the count full. Lytle walked on five pitches to make it 3-0.

The Gators cut the lead to 3-1 in the sixth. Anderson then led off the bottom of the inning with a home run over the left-field fence.

Anderson sat the Gators down in order in the seventh, striking out two.

At Benton, the Tigers led 3-1 through five and it looked like they were going to force a deciding second game.

But Dutchtown (26-10) scored three runs on four hits in the sixth. Ethan Mayeux’s two-out single with the count full scored the go-ahead run.

Owen Wainscott led off the top of the seventh with a walk. Dane Stearns’ two-out double put runners at the corners. Grayson Gates hit a line drive to right field but Mayeaux was there to make the catch for the final out.

The Tigers, who were the designated “visiting” team, got off to a fast start, scoring two in the first.

Stearns singled with one out and scored on Gates’ double. Lawrence followed with his double with one out. But Dutchtown pitcher Nathan Monceaux limited the damage, getting a groundout and strikeout.

Benton loaded the bases in the second with no outs. Gavin Jacobs and Jack Walters singled and Wainscott was hit by a pitch. Lasiter flew out to right field. The end result was a double play and a run to make it 3-0.

The Tigers’ next best chance to score came in the fifth. Lasiter led off with a his double and advanced to third on a sacrifice bunt and groundout. But he was stranded there.

Brock Van Hoy led off the sixth with a single, but the Griffins turned a double play.

Benton starter Gates, a Northwestern State signee, went the distance. He allowed seven hits with four of those coming in the sixth, struck out five and walked six.

At West Monroe, Parkway’s Trenton Lape went 2-for-3 and Zach Schoenborn hit a three-run home run in the 5-4 victory.

After the Rebels took a 1-0 lead in the top of the first, the Panthers scored two in the bottom of the inning.  Brandon Levy and Brady Norcross had back-to-back singles and Trenton Defatta brought them home with a double.

West Monroe took a 3-2 lead in the third thanks to four singles.

Schoenborn’s homer over the right-field fence gave Parkway a 5-3 lead in the fourth. It followed back-to-back singles by Cameron Fink and Lape.

The Rebels cut the lead to one in the fifth.

West Monroe had two on in the sixth with two outs, but Levy stranded them with a strikeout. Levy gave up a two-out walk in the seventh but that was it.

Parkway trailed 4-2 in the second game after six. The Panthers took advantage of two errors and a Barrett Newman single to get within one in the seventh with no outs.

Gabe Larry then hit a shot toward right field that looked like a sure double. But Kade Pittard made a diving catch and threw to first for a double play.

West Monroe (24-8) took a 2-0 lead in the first. Schoenborn cut the lead in half with an RBI-double with two outs in the second.

Knotts tied it in the third with a one-out homer over the left-field fence. Levy and Defatta followed with singles but were stranded.

West Monroe regained the lead with two in the bottom of the inning on two singles, a double and a sacrifice fly.