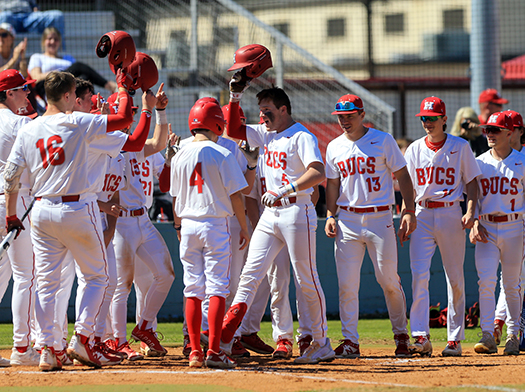 Haughton defeated Texas High 12-3 to extend its winning streak to six. The Bucs then fell to Ruston 11-6.

Austin Anderson (3-0) got the win against Texas High, striking out eight and walking just one in six innings.

Haughton had nine hits against Ruston but left 10 on base.

Rains had another strong performance at the plate, going 3-for-4 with three RBI.

The Bucs trailed 5-1 after four innings then got within one with four runs in the bottom of the fifth. But the Bearcats tallied five in the top of the sixth.

In other games Friday in the Jason Bland tournament, which is hosted by Airline, Ruston (7-2) is scheduled to play Benton (5-2-2) at noon and Airline (4-2) at 2:30 at Airline. The games were moved up from later in the day because of the threat of inclement weather.

Elsewhere, Parkway defeated Northshore 8-2 on the first day of the East Ascension Tournament in Gonzalez.

Cade Josting gave up just one hit in 6 1/3 innings. He struck out seven and walked two.

He also drove in two runs with a two-out single in the bottom of the third.

Trenton Lape had a two-run triple with two outs in the second to give the Panthers a 3-0 lead. Shawn Driggers had a two-out, two-run double that put Parkway up 8-0 in the fourth.

Note: The above report is based on information provided by coaches or available on teams’ official GameChanger accounts.