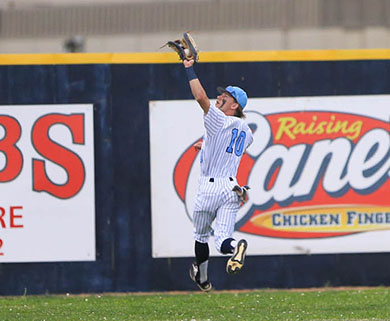 Elsewhere Tuesday, Bossier fell to Doyline 14-2 in a non-district game at Doyline.

Plain Dealing picked up its third win of the season Monday, defeating Ringgold 2-1 at home in a District 1-1A contest.

At Airline, the Vikings scored three runs in the bottom of the fourth to take a 3-2 lead.

The Yellow Jackets tied in the top of the sixth. Airline went back on top 5-3 with two runs in the bottom of the inning then held off a Byrd rally in the seventh.

Lehr’s triple with two outs in the sixth scored Waxley with the go-ahead run. Mason Morgan’s single then made it 5-3.

Matthew Scripture and Caleb Hemmings had one double each.

At Natchitoches Central, Joshua Sewell broke a 5-5 tie in the top of the seventh with a bases-loaded double.

Sewell finished 2-for-3 with four RBI. Austin Anderson and Colin Rains had one double each.

Rains led off the seventh with his double. Anderson was intentionally walked. Chan Lytle was hit by a pitch to load the bases, setting up Sewell’s big hit.

Roman Tolbert, who pitched 2 2/3 innings in relief, got the win. Anderson got the final two outs for his first save.

Before starting the series against Airline, Haughton is scheduled to play a 4 p.m. doubleheader against Red River at home Wednesday. Depending on field conditions, the games could be moved to Red River.

At Captain Shreve, Parkway had 11 hits and drew 10 walks.

Trenton Lape went 2-for-4 with a double. Zach Schoenborn had a hit and walked three times.

Starter Sean Waits allowed seven hits in five innings. He struck out seven and walked only one.

At Benton, the Tigers scored 10 runs in the first inning on six hits, highlighted by Kenner Lauterbach’s three-run home run.