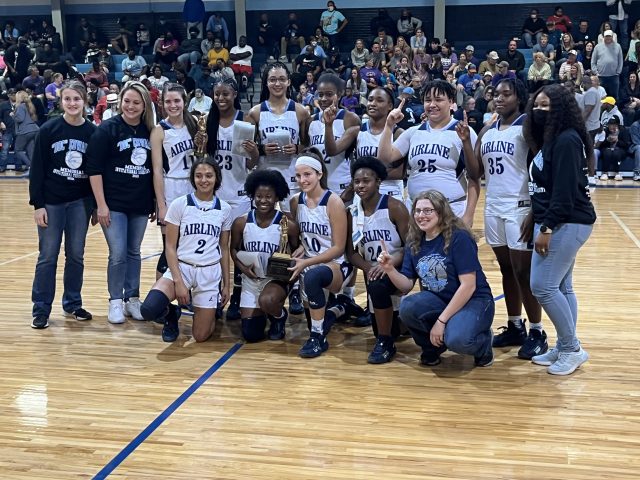 Down 17 with just over two minutes to play in the first half, the Airline Lady Vikings rallied for a 47-44 victory over the Benton Lady Tigers in the “Doc” Edwards Invitational girls championship game Wednesday night at Airline.

The game started out like it was going to be a rout. Airline’s comeback made it a nailbiter and an entertaining game. Both teams played tough defense. Almost every loose ball and rebound were contested.

In the last two minutes of the first half, Airline managed to cut the lead to 12, making a second-half rally a possibility.

It quickly became a reality. Kori Rice and Kayla Hampton sparked an 11-0 run to start the third quarter that cut the Benton lead to 32-31.

Rice, scoreless in the first half, scored eight of her 10 points in the third quarter. Hampton, named the tournament’s MVP, scored six of her team-high 15.

Both teams missed scoring opportunities until the Lady Tigers regained the lead with about two minutes left on a short jumper by Marissa Schoth. Airline’s Kaleigh Brown answered with a shot from the baseline with 1:52 to play.

After a Benton turnover, the Lady Vikings took almost a minute off the clock before calling a timeout. Schoth then caused a tie ball near midcourt, giving the Lady Tigers a chance to take the lead.

After a timeout with 44.4 seconds left, Airline’s Endia Pradier made a steal and was fouled. It was just Benton’s fifth foul of the half so the Lady Vikings took the ball out of bounds. The inbounds pass went to Hampton and she was fouled with 15.8 seconds left.

Benton fouled Hampton again on the inbounds pass to put her at the free throw line. She sank the first and the bonus for the 47-44 lead.

The Lady Tigers then missed a contested baseline 3-pointer with a few seconds left.

Stewart and Schoth scored eight each in the game.

Sellers, Stanford and forward Jada Stewart all picked up their third fouls in the third quarter.

Stanford and Schoth were both named to the all-tournament team.

Pradier, who hit a big 3-pointer early in the fourth quarter and finished with nine points, was named to the all-tournament team along with Hampton and Rice.

The victory was Airline’s second over Benton this season. The Lady Vikings also rallied in the fourth quarter in a 48-46 District 1-5A victory on Dec. 17. The Lady Tigers will get at least one more shot at Airline when the two play their final district game Jan. 25 at Airline.

With its four wins in the tournament, Airline improved to 16-6. Benton dropped to 14-5.

Captain Shreve won the boys championship with a 59-45 victory over Booker T. Washington. The Gators’ Christian Ford was named the tournament’s MVP.

Woodlawn won the boys consolation with a 60-54 victory over Hornbeck.

BTW took the girls consolation with a 46-43 victory over Homer.