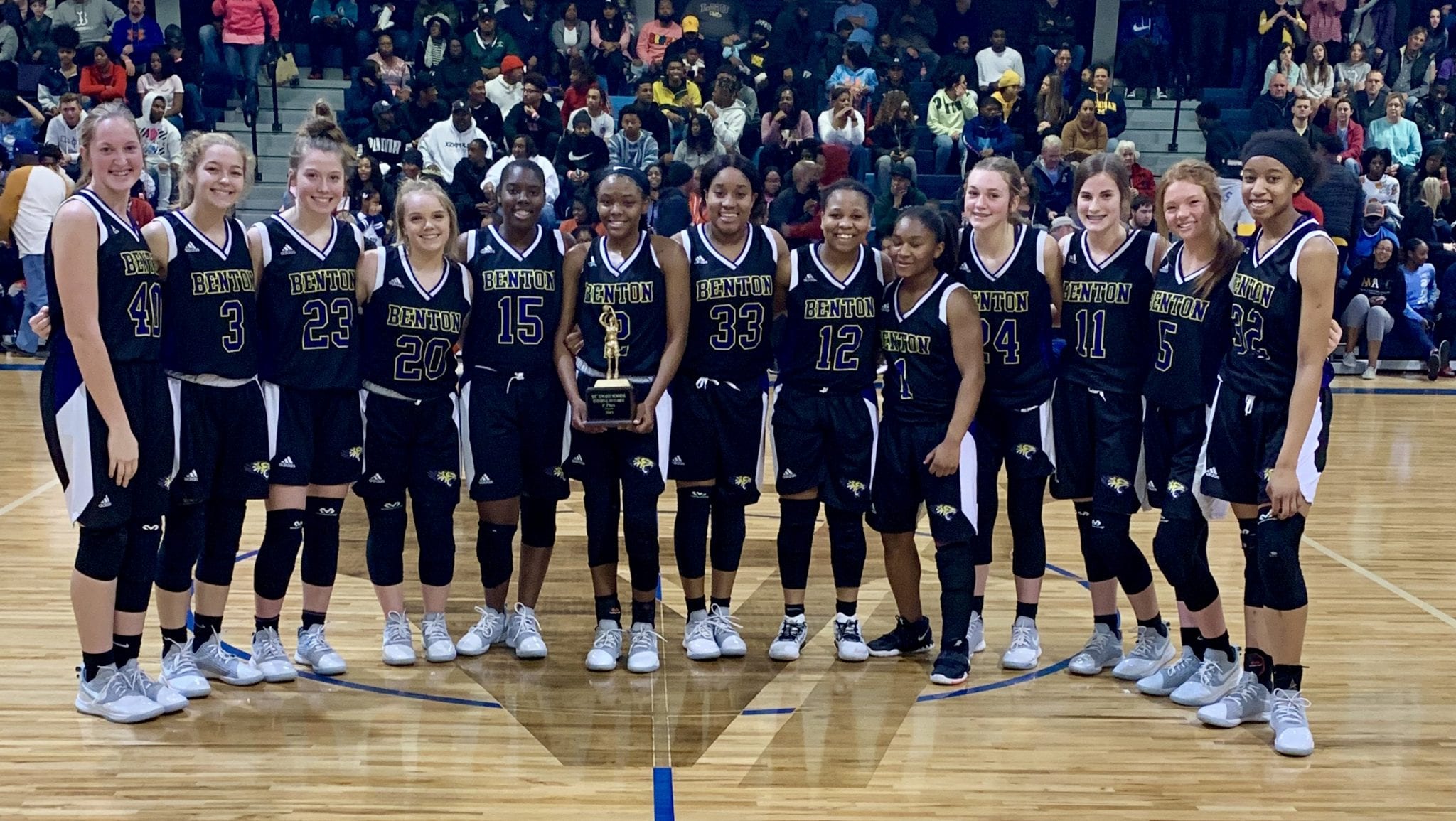 As a player, Mary Ward was part of an Airline team that won a state championship. In her 16-plus seasons as a head coach, she has enjoyed a lot of success, winning multiple district titles and guiding Benton to a state runner-up finish last season.

But one thing missing from her resume’ was winning the tournament hosted by her alma mater, for years the largest held in Northwest Louisiana.

She can add it now. Ward’s Lady Tigers rallied from an 11-point second-half deficit to defeat the Red River Lady Bulldogs 58-55 in the girls championship game of the “Doc” Edwards Invitational sponsored by Willis-Knighton Health System on Monday night at Airline.

In the boys championship game, the Huntington Raiders pulled away from the Parkway Panthers in the second half for a 61-52 victory.

When Ward was a player, the tournament was known as the CNB-Times Classic.

The Lady Tigers (14-3) were coming off a 70-46 victory Friday over previously undefeated Huntington in the semifinals.

“We played phenomenal,” Ward said of that game. “When we play to our potential we’re hard to beat.”

Benton got off to a decent start against Red River and led 20-13 about two minutes into the second quarter. Lady Tigers star Qua Chambers picked up her third foul with about three minutes left in the half.

The Lady Bulldogs (16-5) started hitting shots from inside and out and Benton went cold. Red River went on a 9-0 run to take the lead. That was part of a 16-2 run to close the half, and the Lady Bulldogs led 29-22 at the break.

Red River extended the lead to 39-28 with a little less than four minutes to play in the third quarter. Lady Bulldogs standout Ma’Kaila Lewis also picked up her third foul around the same time.

Benton began to rally and cut the lead to six with just over two minutes left in the quarter. But Red River kept the six-point advantage going into the fourth.

Chambers picked up her fourth foul with a minute to play in the third.

Benton started the fourth quarter with a 6-0 run and the game was tied at 44 with about six minutes to play.

It was still tied with four minutes to go. Jada Anderson knocked down a baseline 3-pointer to put the Lady Tigers up 49-46.

Lewis made a steal and went the length of the court for a layup to get Red River within one.

Chambers scored inside. Red River hit a free throw to make it a two-point game.

With just over a minute to play, Chambers missed a 3-pointer and the Lady Bulldogs got the rebound. But Anderson stepped in front of a pass and was fouled.

She hit the front end of the one-and-one and swished the bonus, putting Benton on top 53-49 with 1:12 left. Red River’s Morgan Payne scored and was fouled but missed the free throw.

Chambers drove the lane and hit a layup to make it 55-51. The Lady Bulldogs missed a shot. Chambers got the rebound and was fouled with 37.1 seconds left. She hit the first free throw but missed the second. Lewis then hit two free throws to make it a three-point game.

Red River didn’t get a shot off. Chambers deflected a pass in the front court and Alisa Harris caught it as the clock ran out.

Chambers, named the tournament MVP, led Benton with 19 points, including 13 in the second half. Harris, who scored four in the fourth, added 11 and Anderson 10.

Makaila Antwine had a basket in the fourth quarter and finished with seven points. Stanford chipped in with six, including a big basket early in the fourth.

Claire Ambrose hit a couple of big shots in the third quarter to spark Benton’s rally.

Harris and Anderson were both named to the all-tournament team.

Lewis led Red River with 20 points, including eight in the fourth. Payne added 11. Both were named to the all-tournament team.

The boys title game wasn’t quite as exciting but Parkway certainly made it interesting.

The Panthers continued to play well in the second quarter, patiently running their offense and looking for easy baskets. Parkway twice scored on crowd-pleasing alley-oops.

Huntington, which had a considerable size advantage and some very quick guards, got going in the second quarter and led 26-23 at the half.

The Raiders extended the lead to nine after three quarters and led by as many as 15 in the fourth. But the Panthers didn’t quit and got as close as six late in the game.

Parkway coach Mike Guess liked what he saw out of his team during the tournament.

“Overall, it was a great experience for us,” he said. “Our guys got to play four games and play for the championship. They gave a warrior effort in the championship game. Just came up a little short. We’ll learn a lot from it and get better.”

Roberts and Gabe Larry led Parkway (9-4) with 14 and 13 points, respectively. Trae Ware added 12. Larry and Ware were named to the all-tournament team.

Michael Moton, Javari Williams and Kameron Evans, all scored nine. Moton was named the tournament MVP. Williams and Hunter were named to the all-tournament team.

Two of McConathy’s 3s came in the fourth quarter.

The Vikings (11-6) led 31-26 at the half after outscoring the Bulldogs 18-12 in the second quarter. They extended the lead to 13 before Red River rallied with a barrage of 3-pointers.

The Bulldogs (11-6) hit five in the third quarter, including three by Taylor Williams, and took a 46-43 lead into the fourth.

But the Vikings held the Bulldogs to just seven points the rest of the way. In addition to McConathy’s 3s, Bilbo scored four points. Thompson and Kendrick Crawford had one basket each in the fourth.

Taaliyah Johnson and Anwaar Shihadeh led Airline (12-7) with 10 points each in the girls third-place game. Raven Sims led the Lady Raiders (15-1) with 21 points.