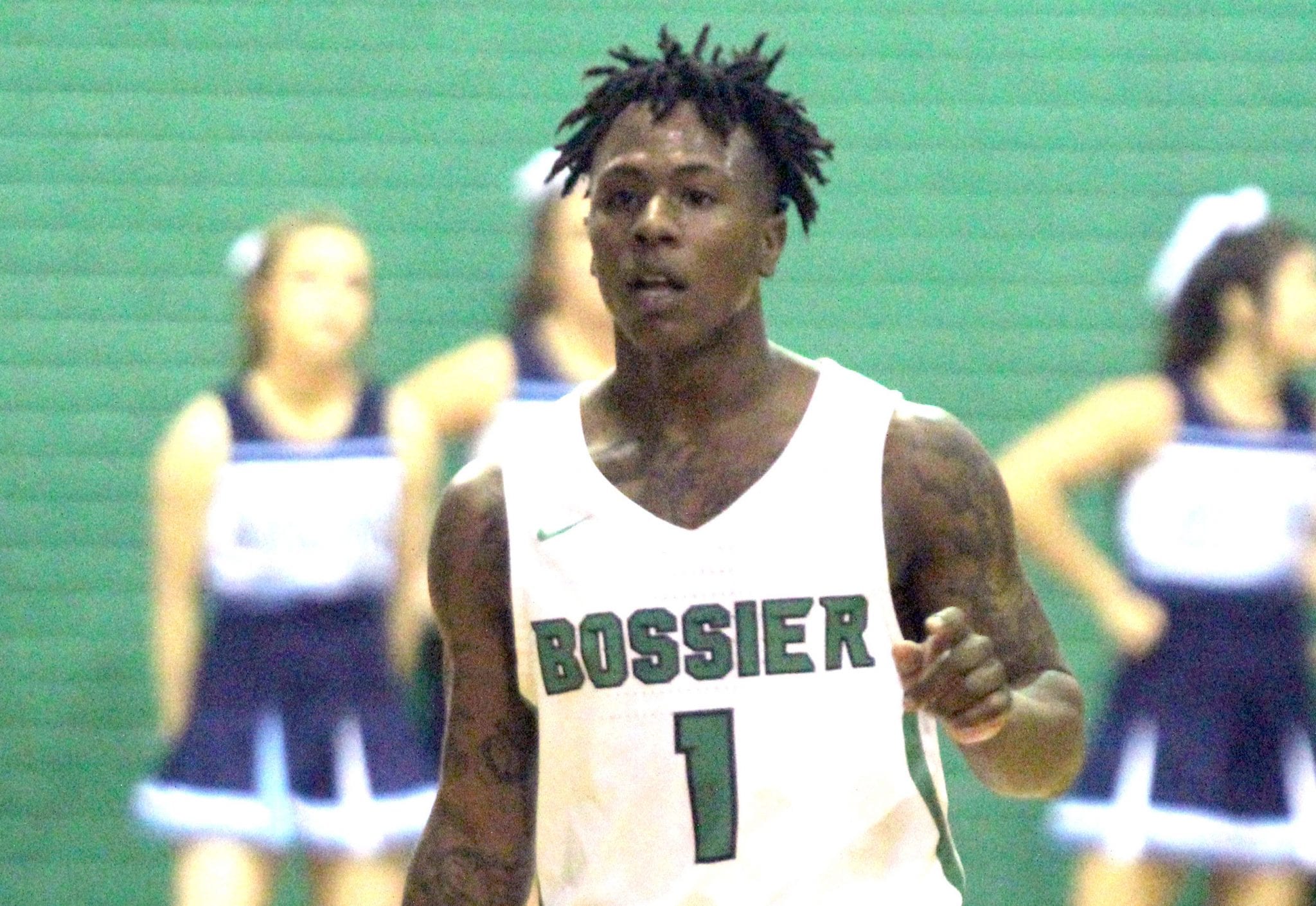 The Bossier Bearkats overcame a sluggish second quarter and rallied for a 75-66 District 1-4A boys basketball victory over the Woodlawn Knights on Monday night at Bossier.

The Bearkats completed a district sweep of the Knights, last season’s state runner-up. Bossier won the first meeting 73-51 on Dec. 22 at Woodlawn.

“They’re a really good team,” Bossier coach Nick Bohanan said. “We definitely have to come to play when we play Woodlawn. The thing is I’m blessed to have 10 to 12 guys that can all really play. When I have one guy maybe tonight’s not his night fortunately somebody else will step up.”

Senior guard Jacoby Decker, the 2018 All-Parish MVP, led Bossier with 30 points. Tim King also came up big. He scored 15 of his 21 points in the second half, including a couple of key third-quarter 3-pointers, to help Bossier rally from an 8-point deficit.

Decker got the packed gym rocking with four 3-pointers in the first quarter. Janyron Rogers also had one as the Bearkats quickly built a 10-point lead.

Leading by nine in the final minute of the quarter with the ball, the Bearkats had a chance to take a double-digit lead into the second. But they turned the ball over on a drive inside the lane and the Knights scored a fast-break layup with about a second left.

That set the stage for a near disastrous second quarter for Bossier. All of a sudden, the shots stopped falling. Meanwhile, Woodlawn managed to get the ball inside for some easy baskets.

The Bearkats scored only six points. The Knights added 18 to their total and led 38-33 at the half.

“I think we came out and shot it so well in the opening quarter then we ran into a cold spell,” Bohanan said.

Bohanan wanted his players to attack the basket before coming out and looking for 3s. But he understood how the excitement of the fast start and playing in front of a capacity crowd could have consequences.

“The (zone) defense they were running kind of dictated that they kind of wanted us to shoot 3s,” he said. “We weren’t going to get bad looks. I think with the type of environment — sell-out crowd — you’ve got a lot of extra adrenaline running through you so a lot of those shots you’ll typically knock down you’re throwing them over the goal and that’s what we were doing.”

Woodlawn continued to have success early in the third quarter and stretched the lead to eight. But Bossier’s trapping defense began to get results.

The Bearkats went on 9-1 run to tie it at 44 sparked by the two King 3-pointers. Woodlawn answered with five straight points. But the Bearkats got a big basket late in the quarter to cut the Knights’ lead to 49-46.

Trailing 51-50, Bossier finally regained the lead on another 3-pointer by King with just over six minutes left.

Bossier’s stifling defensive play continued to force turnovers and the Knights went cold. King’s 3-pointer was the start of a 12-1 run that gave Bossier a 62-52 lead.

“We switched up defenses about midway through the third quarter, started pressuring a little bit more than we had been,” Bohanan said. “The first half everybody was in foul trouble so we couldn’t really pressure them in the first half like we wanted to.

Bohanan said the key was keeping the ball out of Knight standout guard Tra’Michael Moton’s hands and putting pressure on his teammates.

Decker had nine points in the fourth and King eight. Dante Bell, a 6-foot-8 forward, scored six points, including a couple of alley oop baskets on passes from Xavien Beasley.

Bossier was 11 of 14 from the free throw line in the fourth quarter.

Tra’Michael Moton led Woodlawn with 21 points. He hit nine of 14 free throws. Delatrion Moton scored 20, including 10 in the fourth quarter.

The Lady Kats avenged a 47-40 loss to the Lady Knights in the teams’ first district meeting on Dec. 22 at Woodlawn.