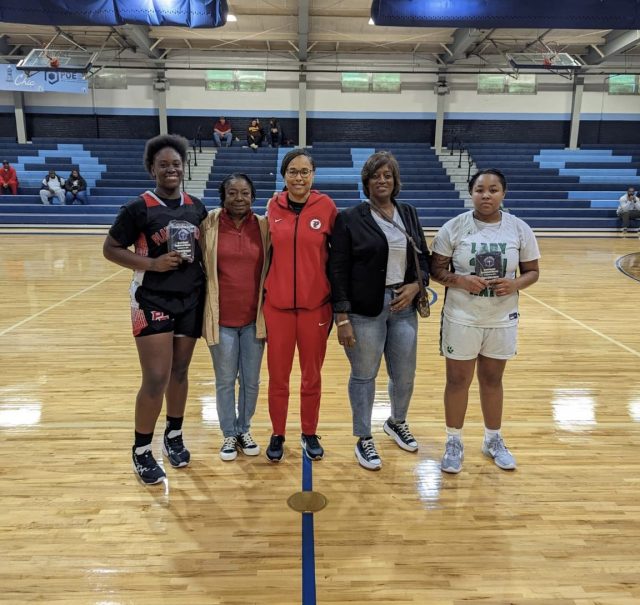 When announcing the Player of the Game winners Saturday at the David Bryant Memorial Classic, Airline Head Coach Eddie Hamilton reminded everyone in the Airline gym that the award didn’t necessarily go the the highest scorer.

They were awarded to the players from each team who represented the character and sportsmanship that David Bryant exhibited throughout his life.

Bryant, a longtime educator and coach in Caddo and Bossier Parishes, passed away in August of 2021 at the age of 57.

Ten games were played in his honor at Airline and BPCC.

His widow Sandra Bryant and sister Shelia Bryant-Dupree, like her brother a former Plain Dealing head basketball coach, was among those close to him on hand Saturday for the games and awards presentations.

The event was sponsored by the Win The Day Foundation.

In the only girls game at Airline, Plain Dealing edged Bossier 33-32. Brianna Newton was Plain Dealing’s Player of the Game and Anijah Hardy was Bossier’s.

In a girls game at BPCC, Parkway defeated Woodlawn 53-8.

Airline fell behind 16-4 against Huntington. The Vikings looked like they were going to get back in it at times, but the Raiders always had an answer.

Tre’von Jackson was named Airline’s Player of the Game and Decedric Webb was named Huntington’s.

Evangel also jumped out to a big early lead against Plain Dealing.

Braylen Clark was named the Eagles’ Player of the Game and Carnez Hillmon was named Plain Dealing’s.

Bossier’s loss to Shreve was its first after four victories.

EJ McDonald and Jyrin Sowell led the Gators with 15 and 14 points, respectively.

Bossier led 25-23 at the half. But the Bearkats went scoreless in the third quarter and Shreve took a six-point lead.

The Gators were 11-of-13 from the free throw line in the fourth quarter. McDonald made all seven of his attempts.