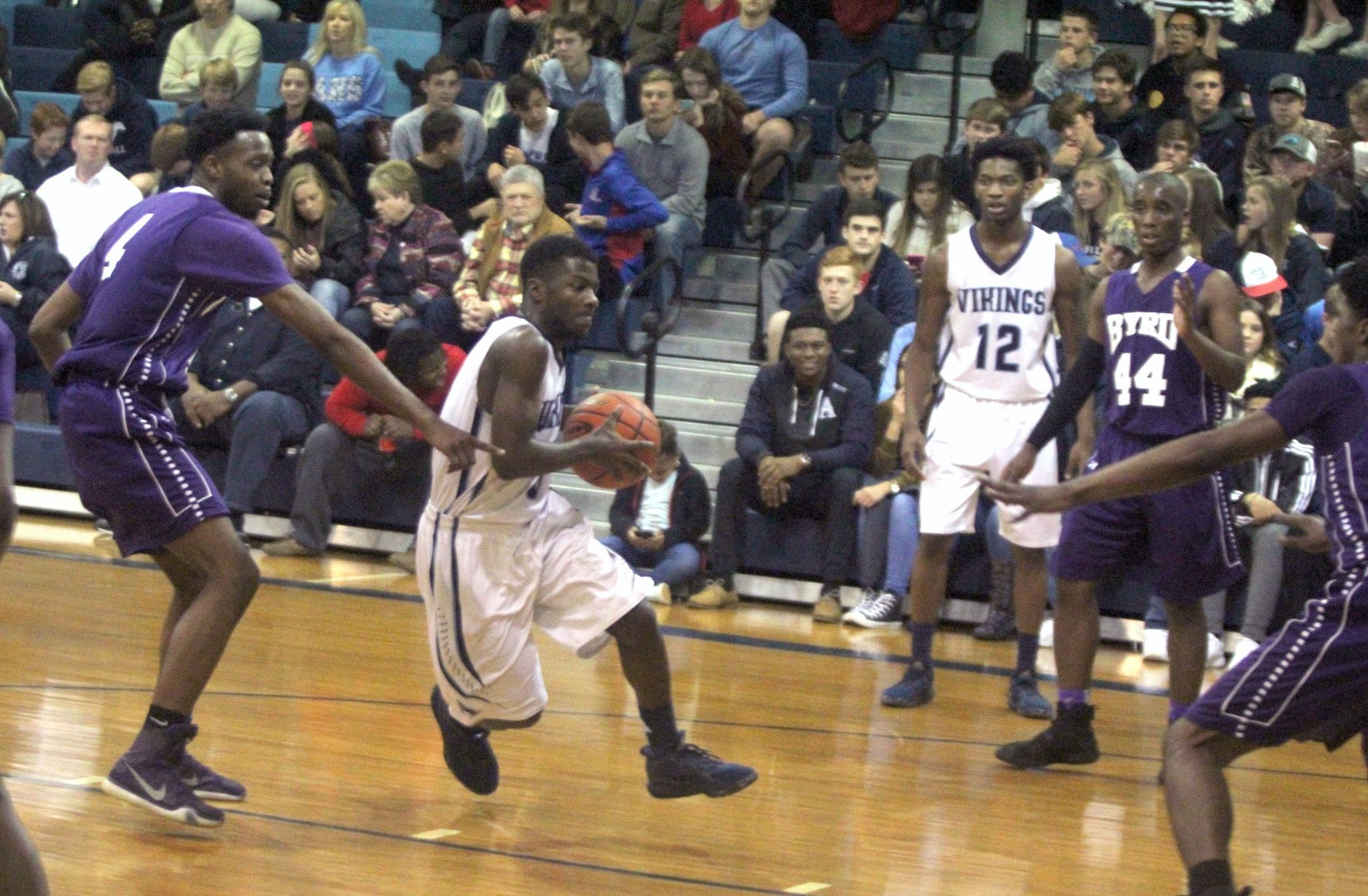 From two district wins to district champions in a year. That’s the story of the 2016-17 Airline Vikings.

Airline clinched the District 1-5A boys basketball championship Tuesday night with a 64-55 victory over the Byrd Yellow Jackets at Airline.

The Vikings improved to 22-6 overall and 10-1 in district with one game to play. Airline hosts second-place Southwood, which defeated Parkway 90-85 Tuesday at Parkway, Friday night. The Cowboys (17-14, 8-3) handed the Vikings their lone district loss 64-62 on Jan. 24 at Southwood.

After the victory over Byrd, the Vikings gathered for photos and then celebrated as a group.

Bilbo has been a key contributor since he was a freshman.

“I think the past four years, especially these seniors, have seen our seasons not going very well,” Airline coach Chris White said. “They were determined to come together as a family and lay it all on the line, and they’ve done that since August. They bought in. They went to the track, the stadium, the weight room. They’ve worked hard in every phase.

“Then when we started practice, they were just determined — we’re going to win district — and that was a tall order after only winning two district games last year. So what they have done is really phenomenal. And all the credit goes to my assistant coaches and the players because they’ve worked so hard and I’m just so proud of them.”

Like many of Airline’s district wins, the one against Byrd wasn’t easy. The Vikings led by 13 at the half and by as many as 15 in the third quarter. But Phillip Stewart, who scored 29 points, rallied the Yellow Jackets and they tied it at 52 with about three minutes left in the game.

With 1:30 left, Airline led 57-55. Ivy was fouled driving the lane and sank both free throws. The Yellow Jackets missed a shot and Bilbo grabbed the rebound. He fired an outlet pass to Ivy who fed Chapple in the lane. Chapple made the layup to put the Vikings up 61-55 with about 48 seconds left.

Ivy scored eight of his team-high 22 points in the fourth quarter with five of those coming on free throws. Bilbo helped the Vikings build the first-half lead, scoring 12 of his 16.

T.J. Robinson added eight points, including a big 3-pointer in the third quarter. Chapple and Ivy also had 3s in the third.

Even with a district championship under its belt, Airline will be on the road in the first round of the Class 5A playoffs. The Vikings were No. 21 in the updated 5A power rankings released Tuesday.

Byrd’s Stewart scored 17 of his 29 in the second half, including nine in the fourth quarter. The game was the Jackets’ regular-season finale. Byrd, which had won four in a row, finished 18-9 and 7-5.

The Yellow Jackets will be going to the Division I playoffs. Basketball now has select divisions and non-select classes, something football has had for the last four years.

At Parkway, the Panthers put up a good fight against Southwood before falling short.

Terrace Marshall Jr. led Parkway (13-11, 4-7) with 28 points. Justin Rogers added 16. Sheldon Dudley scored 15 with all of them coming on 3-pointers. Marshall scored 14 in the second quarter. Rogers scored 10 in the fourth.

Parkway closes the season at Evangel Christian Academy on Friday.

The defending Class 4A state champion Bossier Bearkats closed the regular season with a 75-20 rout of North DeSoto in Stonewall.

Bossier finished the regular season 28-6 and 8-2 in District 1-4A. The Bearkats finished tied for second with Woodlawn behind champion Fair Park. Bossier’s district losses to Fair Park and Woodlawn were by a combined six points.

Despite last week’s two-point loss to Woodlawn, Bossier remained No. 2 in the Class 4A power rankings. In fact, the Bearkats have a bigger lead on No. 3 Westlake and No. 4 Woodlawn than they did last week and will likely go into the playoffs as the No. 2 seed.

Plain Dealing wrapped up the regular season Monday night with a 67-58 loss to District 1-3A champion Mansfield at home. Dakeldrick Oliver led the Lions (10-12) with 20 points. Tyjuan Thomas added 13 and Jakaleb McGee 11.

Plain Dealing was No. 11 in the Class 1A power rankings and will host a first-round playoff game.