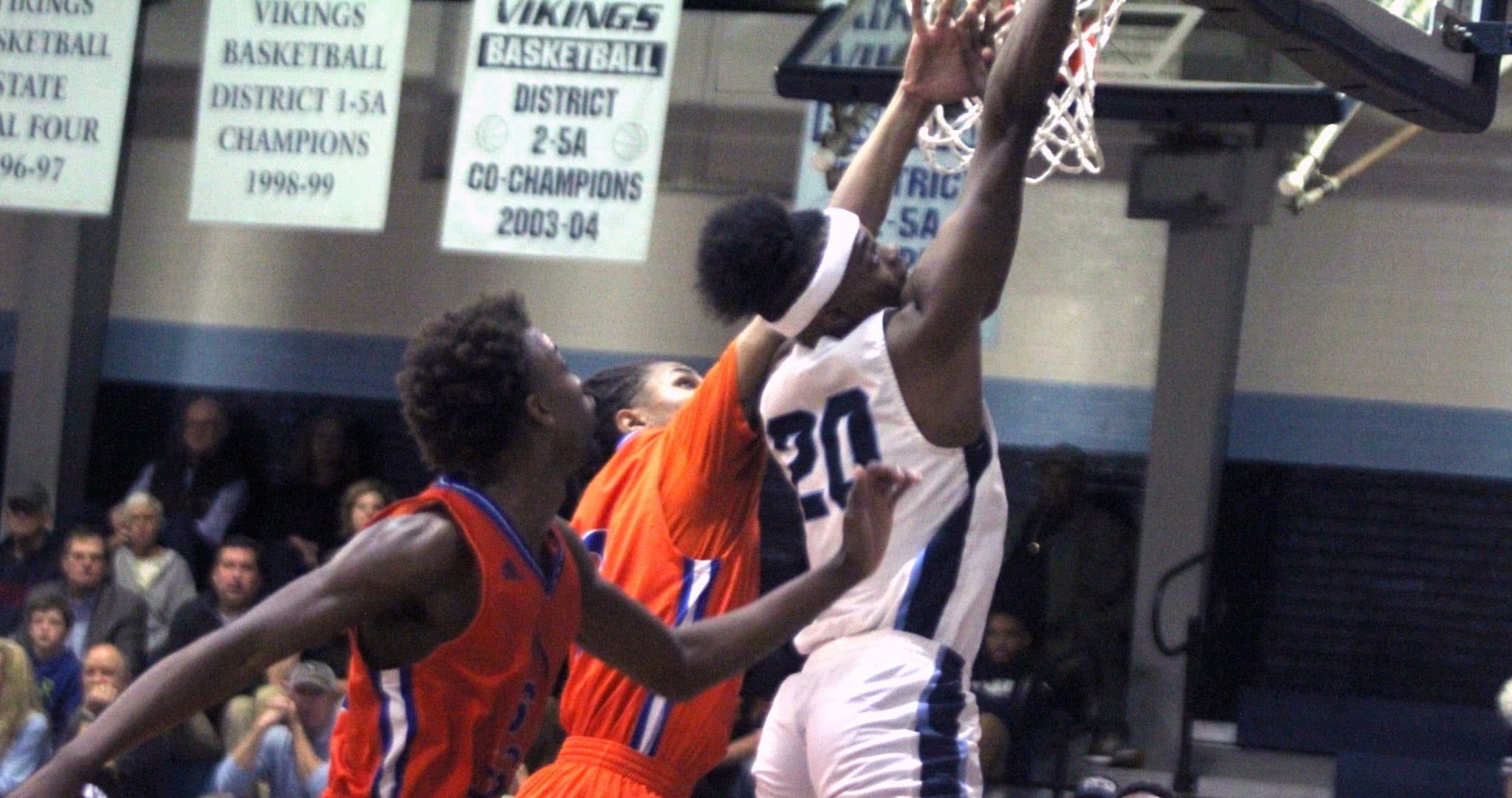 After leading most of the second half Tuesday night, the Airline Vikings found themselves in a four-point hole against the Southwood Cowboys with 1:28 left on the clock.

No problem. The Vikings kept their composure and scored the final five points of the game for a thrilling 62-61 District 1-5A victory in front of a nice crowd at Airline.

Quan Randle nailed a 3-pointer with 14 seconds left to play to give Airline the lead. After a time out, Southwood’s SD Ellis, who had been instrumental in the Cowboys’ comeback, put up a 15-footer as Randle went for the block.

Ellis’ shot was well off the mark and the ball went out of bounds to Airline with 2.2 seconds left. TJ Robinson took the inbounds pass around half court and dribbled the remaining time away as he sprinted toward the baseline.

The victory kept Airline’s hopes for a third straight district title very much Aline. The Vikings wouldn’t have been out of contention with a loss but they would’ve had an uphill climb.

In a District 1-4A game, the Benton Tigers fell to Huntington 63-48 at Benton.

In non-district games, the Haughton Bucs routed Magnolia School of Excellence 70-44 at Haughton and the Plain Dealing Lions defeated North Webster 59-43 in Springhill.

At Airline, the Vikings played well throughout, fighting for loose balls and rebounds on both ends and putting forth a solid defensive effort.

Trailing by as many as seven in the second quarter, Airline quickly got back in it with five straight points. The Vikings outplayed the Cowboys the rest of the quarter, putting up 22 points, and led 31-26 at the half.

Airline stretched the lead to eight early in the third quarter and led by nine with 2:50 left, but this time Southwood rallied. The Cowboys sliced the lead to 47-44 going into the fourth.

Ellis knocked down three 3-pointers in the third and scored 13 of his game-high 22 points.

The Vikings missed a shot inside but got the rebound. Fred Lemons drove inside the lane and scored to cut the lead to two.

With about 30 seconds left, Robinson intercepted a deflected Southwood inbounds pass. He drove to the basket but his shot was blocked out of bounds with 26.6 seconds left.

Lemons inbounded the ball to Randle who dribbled to the top of the key. He passed to Robinson who got the ball to Lemons on the baseline near the Airline bench. Lemons drove toward the basket then passed to Randle, who had drifted to his left. His shot hit nothing but net.

Randle finished with 16 points, including three 3s. Robinson led the team with 17, including seven in the fourth quarter. He made all four of his free throw attempts in the period.

The rest of the scoring was spread among Devin Bilbo, Brayden Thompson, KD Henderson, Jon Hamilton, Devin Jason, Kyle McConathy and Lemons. All of them also contributed with their defensive play.

The Vikings didn’t shoot particulary well at the free throw line, but they still had a sizable advantage. Airline was 11 of 22 to Southwood’s 3 of 7.

At Parkway, the Panthers couldn’t get anything going offensively against the Gators. Parkway trailed 27-13 at the half and then added just 10 points in the second, including two in the fourth quarter.

At Haughton, the Bucs improved to 7-15, ending a nine-game slide.

At North Webster, Plain Dealing raised its record to 12-7 with its third straight win.