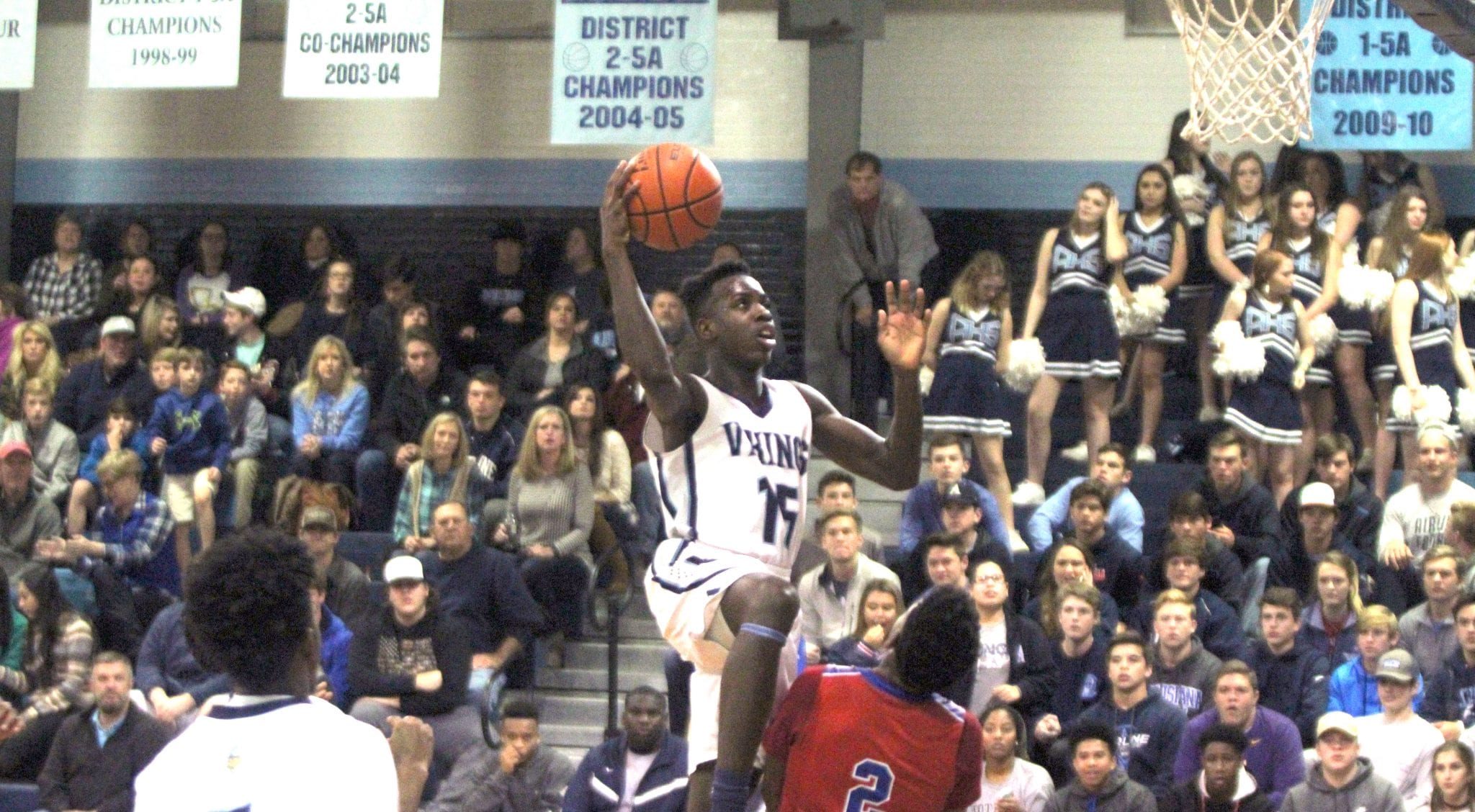 You can bet it’s a night Airline freshman Jose Santiago will never forget.

When it was over, after the Vikings had pulled off a remarkable fourth-quarter comeback Friday and defeated Evangel Christian Academy 59-58, a few dozen Airline students ran on the court to celebrate with the team. For a few seconds you could see Santiago above the crowd, lifted up on the shoulders of his classmates.

Santiago, who was brought up to the varsity just this week by Coach Chris White, made two huge 3-pointers in the fourth quarter as Airline erased an 11-point deficit. The first one, with just less than seven minutes to play, ignited the comeback. It got the vocal Airline student section back in the game and gave the Vikings some hope.

The second one, near the Vikings bench, sliced a four-point Airline deficit to one with 47 seconds left.

With 24 seconds left and Airline still down by one, Santiago was fouled trying to drive inside. He missed both pressure-packed free throws, but the Vikings were upbeat when they came to the bench. Earlier in the quarter Santiago hit a free throw which, considering the final margin, was obviously big.

Airline got the ball right back when an Eagle couldn’t handle the inbounds pass and it went out of bounds.

The Vikings’ TJ Robinson took a pass from Trent Ivy, drove into the lane and scooped in a layup to give Airline the 59-58 lead with 12.7 seconds left.

The Eagles got a good but well-defended shot in the lane that bounced off the rim and then the hands of several players. Evangel’s Jacob Jennings got it and put up a shot near the 3-point line. But Trent Ivy blocked it and time expired.

Airline hit four 3-pointers during the frenetic comeback in the fourth quarter. Robinson, who scored eight of his 10 points in the fourth, sank one as did Louis Greenard.

KJ Bilbo led Airline with 14 points. He scored eight in the third quarter to help keep the Vikings in it as Evangel stretched a two-point halftime lead to seven.

The win was a big one for District 1-5A leader Airline (18-6, 6-1). The Vikings were coming off their first district loss to Southwood on Tuesday. Evangel (17-6, 4-3) would’ve moved into a first-place tie with a victory.

Elsewhere, the Bossier Bearkats also rallied in the second half Friday night, but in the end the Fair Park Indians pulled out a 35-31 victory in the District 1-4A showdown at Fair Park.

Bossier trailed 19-13 at the half and 26-23 after three quarters. The Bearkats tied it at 31 late in the game and had the ball. But Fair Park’s Larry Richardson intercepted a pass and an intentional foul was called on Bossier with 21 seconds left.

Richardson made the free throws and got the ball back because of the intentional foul. The Indians made two more for the final margin.

Friday’s game was the only district meeting scheduled between the two teams. Fair Park has five district games left, but the Indians will be big favorites in all of them.

Bossier was No. 2 in the latest Class 4A power rankings and Fair Park was No. 6.

In another District 1-4A game, Benton routed North DeSoto 63-40 at Benton. The Tigers improved to 9-9 overall and 3-2 in district.

In a District 1-5A game, Parkway ended a two-game slide with a 56-50 road victory over Captain Shreve.

Parkway, which has lost two members of its original November starting lineup, improved to 12-8 and 3-4.