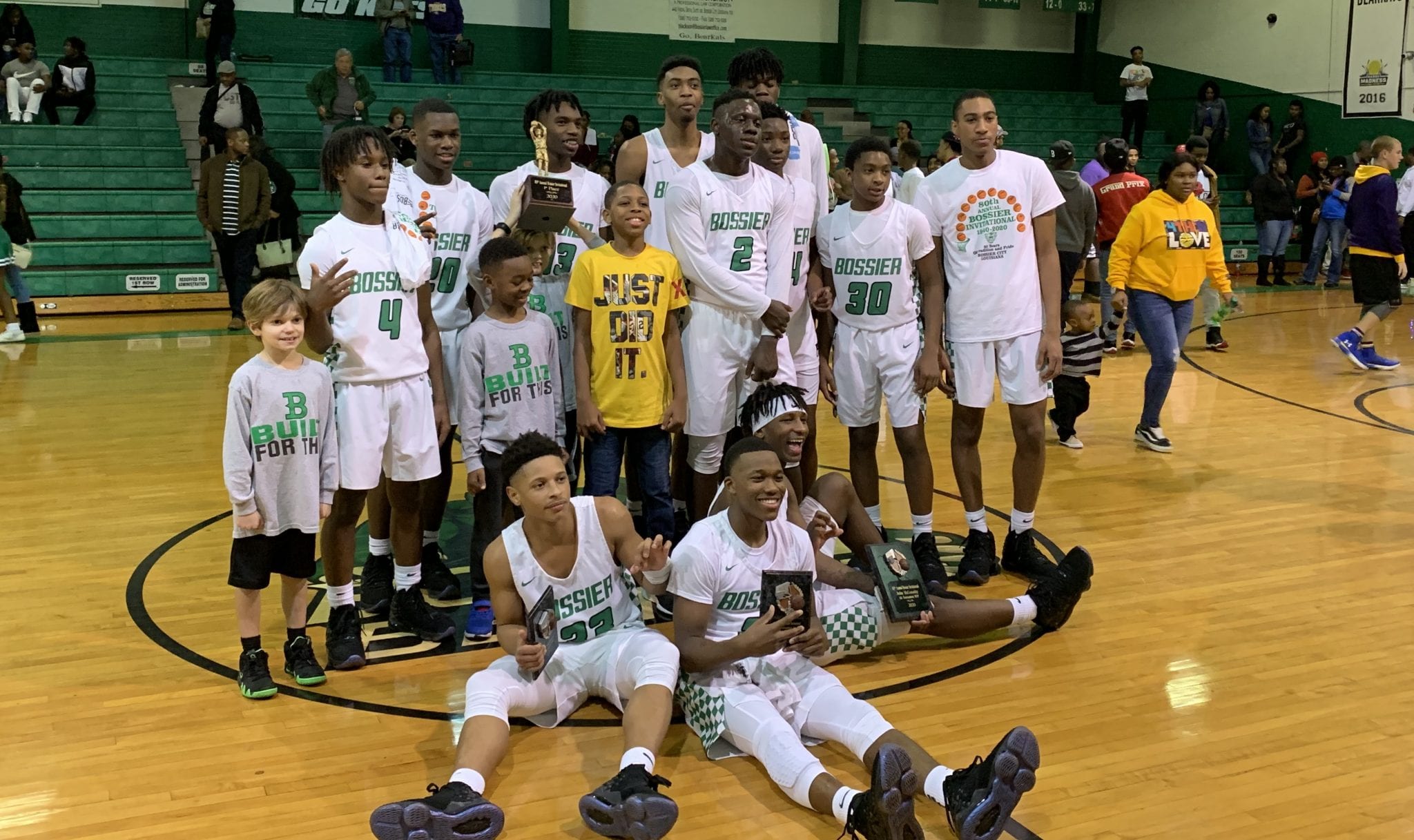 The Bossier Bearkats won the 80th Bossier Invitational with an 84-51 rout of the Huntington Raiders on Saturday night before a near-capacity crowd at Bossier.

It was the second time this season the Raiders and Bearkats have faced off in the finals of a tournament. Bossier won 65-44 in the Showdown in the Lake on Dec. 7 in Lake Charles.

Winning the Bossier Invitational has been the Bearkats’ first major goal of each season since Jeremiah Williams’ years as head coach.

The next two are winning the district championship and then the state title.

“Our goals don’t change around here,” said Bohanan, who replaced Williams, now an assistant principal at Parkway, in 2017. “It always starts with the Bossier Invitational. Usually it will kick us off into district. We like to put emphasis on this tournament. It’s a big deal for us to come out and play well and win this tournament.”

Natchitoches Central’s Devonte Snow hit a long 3-pointer at the buzzer to send the game into overtime.

The Bearkats had about five hours rest before the title game, which was scheduled to start at 8 but was pushed back because of Huntington’s overtime game and a consolation game between Ruston and Red River.

The Raiders had about three hours rest.

Bohanan said how quickly Huntington had to come back and play after an emotional victory was likely a factor in the title game turning into a rout.

“I bet that had something to do with it,” he said. “They had a tough, tough overtime game. They played after us. They did have the heavy legs, I’m sure. We started making some shots and got going.”

Unlike in the semifinals against Shreve when the Bearkats didn’t score until about two minutes remained in the first quarter, Bossier made a lot of shots early against Huntington.

A squad full of fresh players would’ve had trouble slowing the Bearkats down.

Bossier knocked down six 3-pointers en route to a 24-8 lead. Huntington had trouble scoring from anywhere on the court.

The Raiders has no answer for Smith, who nailed seven 3-pointers and led the Bearkats with 38 points. He was named the tournament’s MVP.

Smith scored eight in the second and Deen nine to help Bossier extend the lead to 45-21. Deen was 7-of-8 from the line.

Smith scored a whopping 17 points in the third quarter, sinking three more from behind the arc.

“Otis has that potential in him all the time,” Bohanan said. “When he gets going he can really shoot the ball. When he sees a few go in early in the game his overall game improves as the game goes along.”

Bossier hit 11 3-pointers in the game.

Deen finished with 20 points in three quarters. He and King were named to the all-tournament team.

Both Bohanan and Huntington coach Mack Jones emptied their benches for a good portion of the second half.

In the semifinals, Bossier trailed Shreve only 9-5 after a quarter despite the poor shooting performance.

“That may have been the worst quarter we’ve shot all year,” Bohanan said.

Things got better offensively for the Bearkats in the second quarter. King hit two 3-pointers and Deen made all six of his free throw attempts. It was tied at 20 at the half.

Bossier got some separation in the third quarter. Deen made two 3s and scored nine of his game-high 19 points. Smith hit one from long range and also scored nine.

The Bearkats limited the Gators (12-5) to 11 points and led by 10 going into the fourth. Bossier pushed the lead to 14 and Shreve never got closer than seven.

John Mitchell kept the Gators in the game with 28 points, including four 3s. He had 18 in the second half.