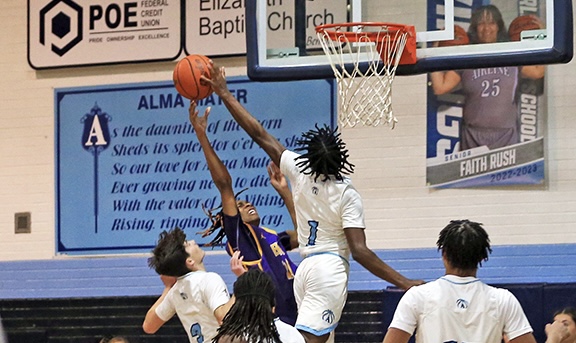 In District 1-5A, Benton topped Haughton 56-47 at Haughton, and Airline edged Byrd 74-73 in overtime at Airline.

Also in 1-5A, Parkway’s four-game winning streak came to an end with a 67-54 loss to Captain Shreve at Shreve. The other 1-5A game between Southwood and Natchitoches Central was postponed because of Tuesday’s inclement weather.

In District 1-4A, Bossier defeated Northwood 66-39 at Northwood.

In MAIS District 5-3A, Providence Classical continued to roll with an 85-42 victory over Tallulah Academy at home.

In District 1-1A, Plain Dealing fell to Ringgold 97-41 at Ringgold.

At Airline, Tre’von Jackson sank a free throw with 5.1 seconds left in overtime to give the Vikings the one-point lead. Byrd was unable to get a shot off after calling a timeout with 1.7 seconds left.

With the score tied at 61, the Jackets missed two free throws with 5.5 seconds left in regulation. The Vikings missed a contested shot from the baseline at the buzzer and the game went into overtime.

With four minutes to play, it was tied at 56. Jackson hit a shot inside the lane to tie it at 61 with 16 seconds left.

With 1:16 left in overtime, Jackson drove to the basket and scored, giving the Vikings a 71-70 lead.

Kanayo Agu scored on a drive with 23.5 seconds left to put Airline up by one. The Jackets hit one free throw to tie with 16.6 seconds left.

After a timeout with 9.7 seconds left, Jackson was fouled after receiving the inbounds pass from O’Glee in the backcourt. His first free throw bounced off the front of the rim. The second was good.

Jackson led the Vikings with 26 points. O’Glee and Agu scored 16 each.

At PCA, Bowman Lovell led the Knights with 23 points. He was honored before the game for reaching 1,000 points in his career last week.