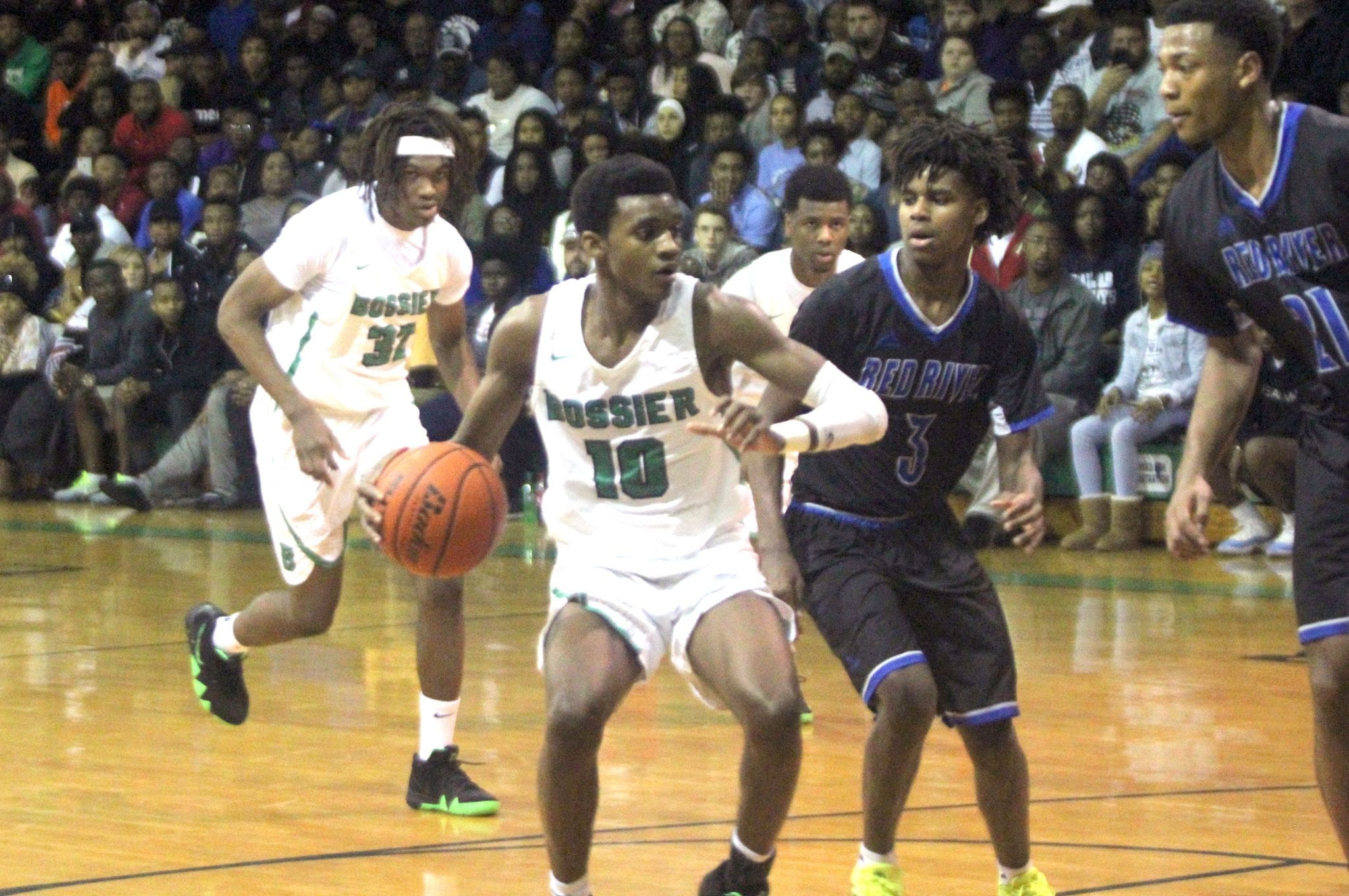 One goal down, two to go for the Bossier Bearkats.

Bossier defeated the Red River Bulldogs 75-55 in the championship game of the 79th annual Bossier Invitational before a capacity crowd at Bossier on Saturday night. It was the Bearkats’ second straight title and 20th overall.

‘We tend to lock in, and last year got us rolling so we’re hoping this year is going to continue to get us rolling,” he said.

Bohanan has yet to lose a game in the Bossier Invitational, but he said it’s not about him.

“I can’t necessarily say I’m undefeated,” he said. “The teams are undefeated. The players are the ones out here executing. They take care of the wins.”

The Bearkats did just about everything well, but it took them awhile to pull completely away from the pesky Bulldogs.

Red River led 16-15 after an entertaining back-and-forth first quarter. Bossier started to get some separation midway through the second quarter.

The score was tied for the final time at 18 with just over six minutes left. Bossier closed the half with a 15-3 run for a 33-21 lead.

Otis Smith hit two 3-pointers in the period and scored eight of his 18 points. Bossier knocked down seven 3s in the first half, including three by Kaalas Roots and two by Jacoby Decker.

“I have so many guys that can contribute and that’s what I try to tell them, ‘Get ready when your time comes,’ ” Bohanan said. “I had a couple, came out in the first quarter and didn’t do much, then came out in the second quarter and they were locked and loaded and started knocking down a few shots.

“It’s funny how that works. When one of them hits, the other hits then they all start hitting. That’s the thing. If we stick together and play as a team and play for each other good things tend to happen.”

Both teams had no trouble scoring in the third quarter. Red River hit four 3-pointers and scored 21 points. Emareyon McDonald nailed two of them, including a half-court shot at the buzzer. But Bossier almost matched the Bulldogs with 20 points and still led by 11 going into the fourth.

The Bearkats were patient in the second half, looking for opportunities to drive the lane and attack the basket.

“They started doing a little trapping there and they were leaving the middle open so we tried to get the ball to the middle and attack from there,” Bohanan said. “I thought the guys for the most part were attacking the basket and not settling for 3s … I thought we stayed in attack mode. We wanted to attack 21 (forward Jesse Davis). We wanted to go at him. Anytime you got a good big you have to go in there and go at him and not settle. For the most part we did a good job.”

Roots, named the tournament’s MVP, scored nine points in the final quarter. He made all five of his free throw attempts. The Bearkats were 8-for-8 from the line in the period.

Roots finished with a game-high 22 points. Decker, who scored nine in the first quarter, added 13. Xavien Beasley had eight.

Smith and Beasley were named to the all-tournament team.

Dante Bell, Bossier’s 6-foot-8 forward, got the loudest cheer of the night on a thunderous dunk in the fourth quarter. He also blocked and altered shots on the defensive end.

Red River got few second-chance shots in the fourth quarter as the Bearkats controlled the boards.

McDonald led the Bulldogs with 14 points while Davis had 10. Both were named to the all-tournament team.

The Loyola College Prep Flyers took third place with a 66-59 victory over the Natchitoches Central Chiefs.