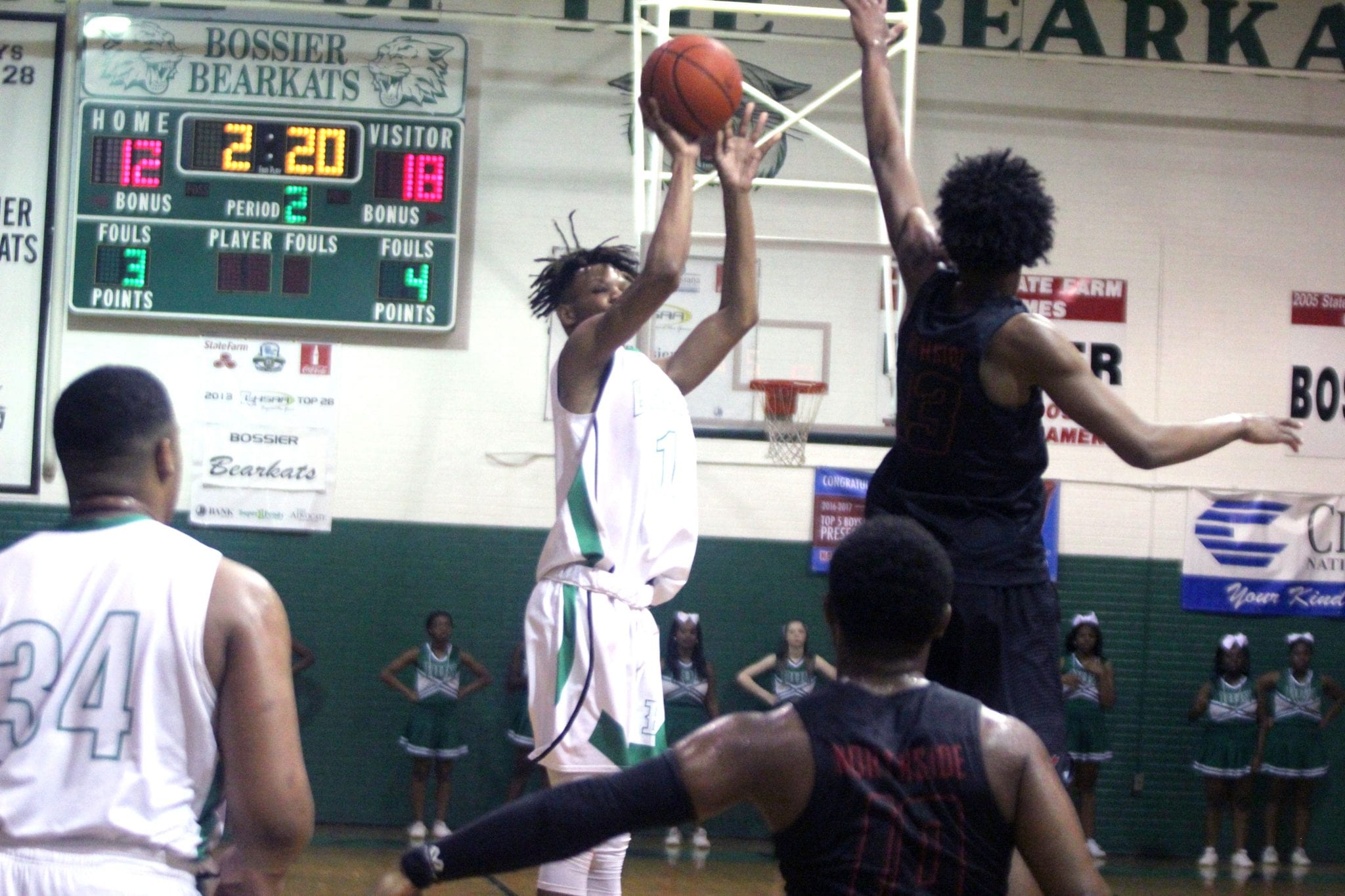 The Bossier Bearkats had been in similar situations before, but this time their season was on the line.

Going into the fourth quarter of their Class 4A second-round playoff game, the No. 2 seed Bearkats trailed the No. 15 seed Northside Vikings by eight.

Through the first three quarters, Bossier hadn’t shot the ball very well. The Bearkats had difficulty scoring from inside and outside. During one first-half trip down the floor, Bossier had at least five shots at the basket but couldn’t score.

Meanwhile, the visitors from Lafayette were having success getting the ball inside to their big post players. They were also shooting reasonably well from outside.

But as they have a couple of times this season, the Bearkats turned it on when they had to.

Propelled by the 3-point shooting of Jacoby Decker and Tybo Wimberly, Bossier rallied for a 53-46 victory. The duo combined for five 3s in the fourth quarter.

Bossier defeated Ellender 63-61 at Bossier on a bucket at the buzzer in last year’s quarterfinals en route to the state title.

Meanwhile, the Plain Dealing Lions’ season came to an end Tuesday. The No. 11 Lions fell to No. 6 Tensas 69-58 in the second round of the Class 1A playoffs in Newellton. Plain Dealing finished 11-13.

Early this season, Bossier rallied from a nine-point deficit in the final three-and-half minutes against Wossman to send the game into overtime, and the Bearkats went on to win.

In the semifinals of the Bossier Invitational, Bossier came from 17 down in the fourth quarter to defeat Ruston.

With less than a minute gone in the third quarter Tuesday, the Bearkats found themselves trailing Northside 30-17.

Wimberly scored seven points in the third quarter. He and Decker hit one 3-pointer each, keeping the Bearkats within striking distance. But Bossier missed several chances to cut into the lead more.

Early in the fourth quarter, Bossier’s full-court pressure defense starting taking its toll. The Bearkats got within three with 6:48 left.

Bossier took its first lead of the game at 45-44 on a Decker 3-pointer, but Northside scored inside to go back on top.

Bossier made 3-of-4 free throws down the stretch. Northside missed a 3-pointer and the Bearkats forced a turnover.

Wimberly finished with 21 points, including five 3-pointers. Decker also made five from long range and scored 19.

Kaalas Roots made three big free throws in the fourth quarter. Chris Davenport had a basket inside during the comeback.

There was a scary situation after the game. Bossier’s Tyron McCoy went down on his back on the court. He was eventually helped to the area outside the Bearkats locker room and put on a training table. He was then taken by ambulance to a hospital where he was treated and released.

A couple of times during the fourth-quarter rally, McCoy left the Bossier bench and went into the area outside the Bearkats’ locker room. Bossier coach Jeremiah Williams told media after the game that McCoy has a heart arrhythmia issue but doctors are OK with him playing basketball and, in fact, encourage it.