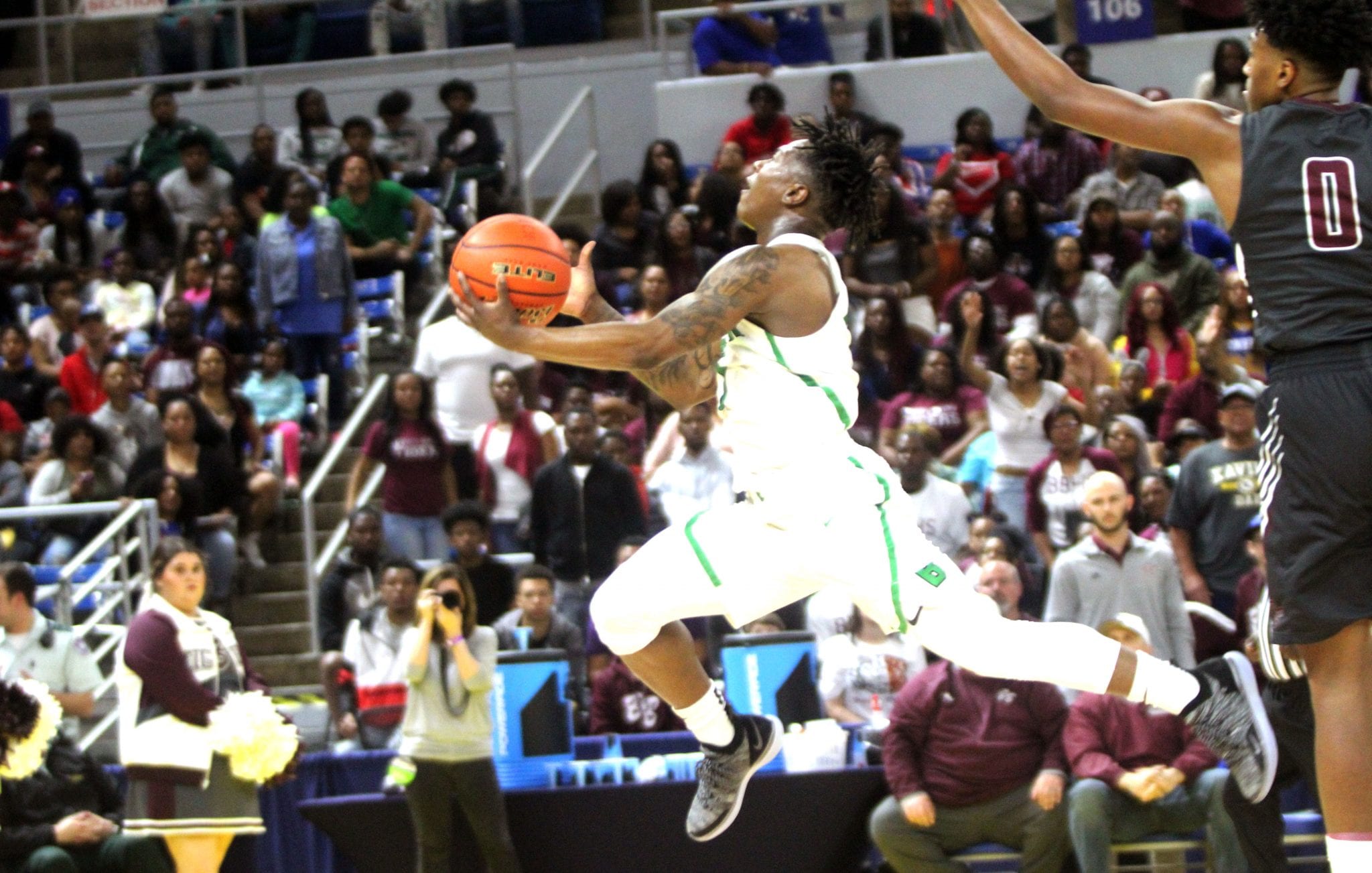 After trailing for most of the game, including by 10 early in the fourth quarter, it looked like the Bossier Bearkats were about to cap a remarkable comeback against Breaux Bridge with a state title.

Senior guard Jacoby Decker hit a 3-pointer with 3:10 left to play to give Bossier a 58-54 lead in the Class 4A state championship game Friday night at Burton Coliseum in Lake Charles.

“Winning a state championship is never easy,” said Bossier head coach Nick Bohanan, whose team trailed by as many as 15 in the first half. “We had a pretty good run (in the playoffs) up to this point. We hadn’t really been tested in a long time. Tonight we were tested a little bit. Our shot wasn’t falling early. We dug ourselves a pretty big hole.

“I’m very proud of this group. They showed great resiliency and continued to fight.”

Bossier had a chance to extend the lead to seven with less than three minutes to play but missed a 3-pointer from the baseline. After Dalton Alexander III hit a 3-pointer to cut the lead to one, the Bearkats missed a pair of free throws.

Breaux Bridge’s Seth Alexander drove toward the basket and was fouled with 12.6 seconds left. He made both free throws to give the Tigers a 59-58 lead.

Decker got a good look at a 3-point shot with about 4 seconds left but it wouldn’t fall. Breaux Bridge hit two free throws with 1.4 seconds to play for the final margin.

“I was trying to get Xavien Beasley or Jacoby Decker the ball going downhill at the basket,” Bohanan said. “They both are really tough. I put my shooters in the corner. That way they had somebody to kick to. It just didn’t go our way.”

Fouls and free throws were a big factor in the game. Bossier had 34 team fouls to Breaux Bridge’s seven. The Tigers went to the free throw line 44 times and made 26. Bossier shot just 11 free throws, making seven.

Many of the fouls called on Bossier came in the backcourt when the Bearkats were trying to work their press. All of Bossier’s key players got into foul trouble.

Beasley, Bossier’s second-leading scorer on the season, picked up two in the first quarter and got his fourth with about five minutes left in the third quarter. Dante Bell, a 6-foot-8 forward, picked up two quick ones also. His fourth came just after Beasley’s.

Guard Kaalas Roots was whistled for his fourth early in the fourth quarter.

“We’ve got depth and they stepped up and then those guys got in foul trouble. We kind of had to pull back from the pressure a little bit and it didn’t go our way tonight. It happens.”

Decker, who will go down as one of the best players in Bossier history, led the Bearkats with 23 points, all in the second half.

Decker and the rest of the Bearkats had trouble getting any shots to fall in the first half. Bossier took 33 shots and made six. Breaux Bridge took just 14 but made nine.

The Bearkats were 0-for-10 from 3-point range until Cody Deen hit one from the corner at the second-quarter buzzer to cut a 15-point Tigers’ lead to 27-15.

“The first half is the reason why we lost,” Decker said.

Decker was 0-for-10 from the field in the first half, including 0-for-5 on 3-pointers. In the second half, he was 8-for-19 and scored 14 points in the fourth quarter alone.

“I’ve had the pleasure of coaching Jacoby Decker for four years,” Bohanan said. “I know what type of ball player he is. I know how much work he puts in the gym. I’ve never told him not to shoot the basketball. Even if he’s 0 for 40 I’m going to tell him to shoot it. He’s that dynamic of a player.

“All he has to see is one go in the hole. He’s capable of having an explosion.”

Decker said scoring on drives to the basket finally got him going offensively.

“I started seeing the ball go in the hole and that made it easy,” he said.

Bossier had a great chance to take control of the game early. The Bearkats forced 10 turnovers in the first quarter but managed just six points off them and trailed 9-8. Part of the reason for that was good defense by Breaux Bridge inside the paint. But the Bearkats simply just didn’t shoot well.

Breaux Bridge finished with 26 turnovers to just six for Bossier.

In the second quarter, things got worse as the Bearkats were just 3-of-18 from the field.

“I thought we had good shots,” Bohanan said. “Most of them were uncontested. At the half I told them to keep shooting because they’re going to start going in.”

Beasley was the only other Bearkat in double figures with 10 points. Deen, a junior, scored nine, including two big 3-pointers in the fourth quarter.

Alexander III added 13 for Breaux Bridge and Kyser Patt had 11.

There were plenty of tears from the Bearkats in the immediate aftermath of the loss, but by the time they got to the postgame press conference Beasley, Decker and Deen were composed.

Decker spoke of his love of playing for Bossier for the last four seasons and for Bohanan the last two.

“I think Bossier is the best place to play basketball at,” he said. “He treated me like I’m his son.”

Beasley played just one season at Bossier. He did his best to keep his teammates’ spirits up after the game.

“The loss was bad but it’s bigger than basketball,” he said. “They’re still my brothers at the end of the day.”