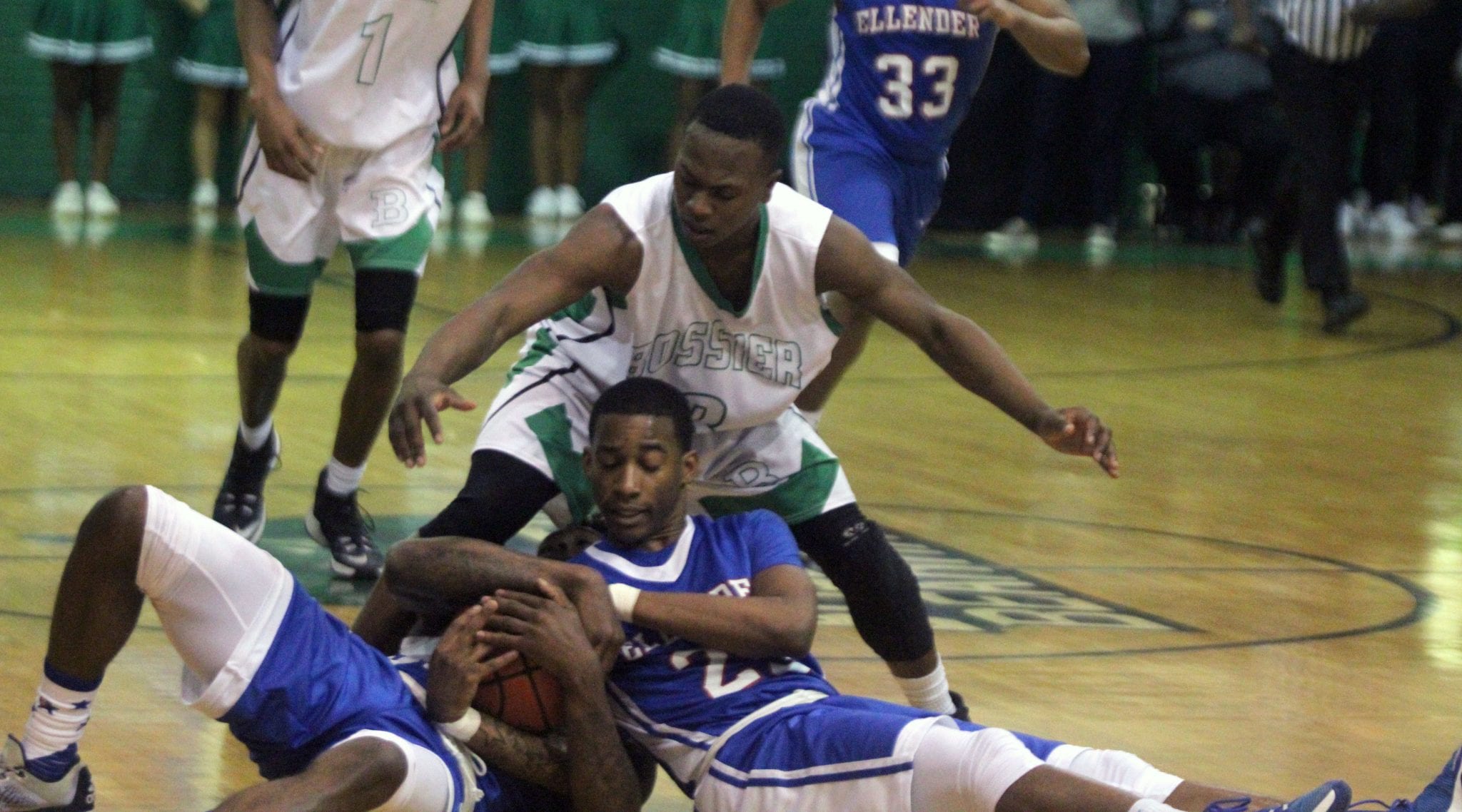 With a little more than a minute left in the first half Friday night, Kaalas Roots hit a 3-pointer to give the Bossier Bearkats a 26-19 lead over the A.J. Ellender Patriots in their Class 4A boys basketball quarterfinal game.

The packed Bossier gym was rocking. The Bearkats were playing well.

And then everything fell apart. Ellender scored the final four points of the first half to cut the lead to 26-23 and stall Bossier’s momentum. The Patriots then outscored the Bearkats 16-1 in third quarter, part of a 20-1 run starting in the final minute of the second quarter.

In a second-round victory over Northside on Tuesday, Bossier came from eight points down after three quarters to win. There was no comeback this time. Ellender rolled to 60-37 victory, ending the Bearkats season.

Bossier, the No. 2 seed, finished 30-7. Seventh-seeded Ellender (25-12) will face the Plaquemine-Westgate winner in the semifinals next week in Lake Charles.

When it was over, Ellender’s Marquie Mosley did a mini-gymnastics routine that concluded with a flip. It was obviously in response to last season’s quarterfinal game, a 63-61 Bossier victory. After the Bearkats scored at the buzzer, Travis Manning did a flip in celebrating the victory.

The Ellender coaches, players and fans left believing the Bearkats didn’t get the shot off before the clock hit :00 and that the game should’ve gone into overtime. The Patriots obviously used that as motivation Friday night.

“I feel bad for our seniors, but we had another good season,” he said. “Now it’s time to move on. They made the plays they needed to down the stretch and we didn’t. That was the difference. They deserve to be going to the Top 28.”

This marks only the second time in the last nine seasons that Bossier failed to reach at least the semifinals.

The game was the final one for seniors Antonio “Rudy” Davis, Chris Davenport, Tybren “Tybo” Wimberly, Ceontrey Jarmin, Abarreion Johnson and Tyrese English. Over the past two seasons, they helped Bossier win 57 games and a state championship.

In the win over Northside, Wimberly and sophomore Jacoby Decker keyed the comeback with their 3-point shooting. Against Ellender, they couldn’t get a shot to fall in the second half and neither could any of the other Bearkats.

Wimberly led Bossier with 13 points, including two 3-pointers, with all of those coming in the first half. Decker, who had 19 against Northside, did not score.

Bossier missed 3-pointer after 3-pointer. Some went in and out and others missed badly. Every time the Bearkats put one up the crowd was ready to roar. Instead, there was only silence in the second half.

The Bearkats had trouble scoring inside too. The 6-foot-6 Davenport had some success, finishing with nine points.

The final 2.4 seconds of the third quarter illustrated the kind of frustrating night it was for Bossier.

Ellender hit a free throw to go up by 10. The Patriots missed the second, but the Bearkats couldn’t control the rebound and the ball went out of bounds off a Bossier player with less than two seconds left. Ellender scored inside to take a 12-point lead.

Ellender senior Davontavean “Tay” Martin was the best player on the court Friday. A Washington State football signee with great speed, Martin continuously drove to the basket, often taking the ball from one end of the court to the other.

He finished with a game-high 19 points. Askyre Anderson added 14 and Mosley had 11.

Defense has long been a key to Bossier’s success, but Ellender matched the Bearkats’ intensity. They used a trapping press for much of the game and forced several turnovers.

The seniors Williams loses will be tough to replace next season, but Bossier’s cupboard won’t be bear.

Decker, who had an outstanding season, and Roots, a good 3-point shooter, are only sophomores. Isaiah Wallace, another shooter with potential, is a junior.

Tyron McCoy, who didn’t play Friday after having a medical issue following Tuesday’s game, is just a sophomore. He was on the bench in street clothes. Landric Watson is a junior.

Dante Bell, a 6-foot-7 freshman and Davenport’s brother, is another player with potential.