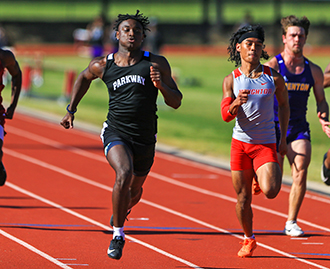 The Panthers scored 118 points. Haughton was second with 92.25 and Benton third with 86.

With the district meets next week, several parish athletes had their best performances this season while others changed their routines some to be better prepared for next week.

Parkway’s Jaylan White won the 100-meter dash in 10.80 seconds. He improved his parish-best time this season by .04.

Haughton’s Kenneth Smith took the 800 in a parish season best of 1:59.83. He is the first parish runner to go under two minutes this season.

Airline’s Tyson Burns also had a personal-best this season of 12-0.

Benton’s Mark Perry and Airline’s Jeremiah Boudreaux tied for first in the high jump as both cleared 6-4. That also ties for the parish season best.

Perry equaled his previous best and Boudreaux improved his by 6 inches.

Parkway’s Trey Fisher and Haughton’s Dexter Smith finished 1-2 in the triple jump and both had personal-bests this season. Fisher leaped 40-11 and Smith went 40-0.5.

The Parkway foursome of Williams, Camaro Mayo, Chitman and White won the 4X100 relay in 42.98, the best in the parish this season.

The Parkway team of Mayo, Williams, Chitman and Achee took the 4X200 relay in 1:30.24, a parish season best. The Haughton team of Amryon Lars, DJ Gladney, Obregon and Ecot was second in 1:32.31.