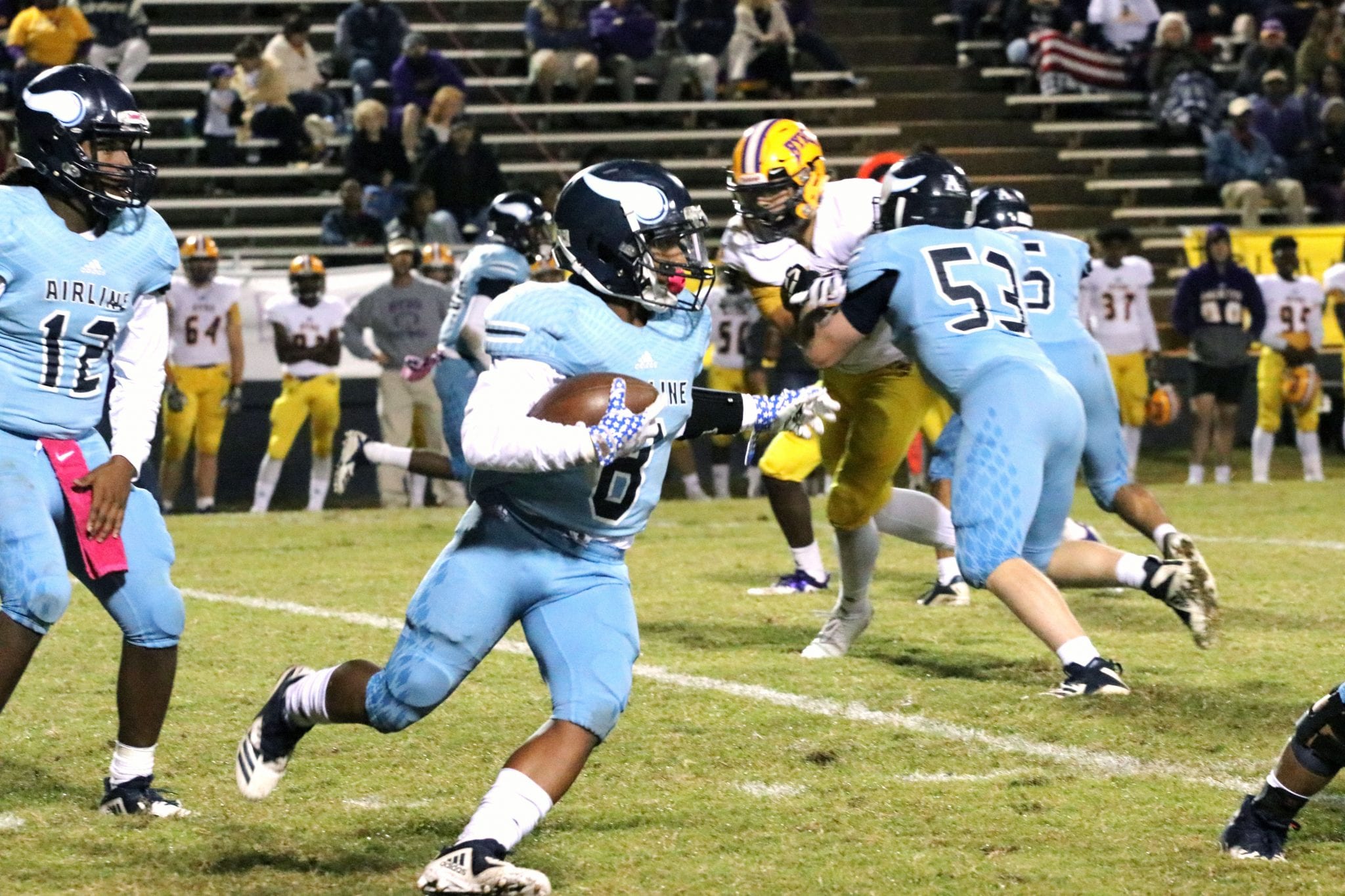 The Airline Vikings fell to the Byrd Yellow Jackets 28-18 in a District 1-5A game Friday night at M.D. Ray Field at Airline Stadium.

Airline dropped to 2-7 overall and 1-4 in district. The Vikings close the season at home against parish rival Haughton (8-1, 4-1). The Bucs defeated Parkway 26-23 Friday night.

Airline’s game against Byrd was similar to most of their other ones this season. The Vikings got off to a great start and led 18-7 in the second quarter, but they didn’t score again while the Yellow Jackets rallied.

Airline has led in the third quarter in five of their seven losses. Five of the losses have been by 10 points or less.

Jacoby Bailey returned a fumble to give the Vikings a 6-0 lead with 7:58 left in the first quarter. Jordan Gladney’s 39-yard TD pass to Jamal Johnson extended Airline’s lead to 12-0 with 3:30 left in the quarter.

Byrd took advantage of an Airline fumble to score its first touchdown, a 30-yard run by quarterback Cameron Felt, with just less than four minutes to play in the half.

Brian Marshall quickly put the Vikings back on top by two touchdowns, returning the ensuing kickoff 80 yards for a touchdown. But the Yellow Jackets answered with a 31-yard touchdown pass from Felt to Garrett Lambert to get within four at the half.

Byrd took the lead for good on Charlie Barham’s 3-yard TD run on its first possession of the second half. The Jackets then got the ball back, recovering a squib kick that bounced off a player.

Barham scored the game’s final touchdown later in the quarter. Barham finished with 156 yards, according to The (Shreveport) Times’ stats. The Yellow Jackets outgained the Vikings 390-128.

Minden 56, Bossier 6: At Bossier’s Memorial Stadium, the Crimson Tide were too much for the undermanned Bearkats, rolling to a 49-0 halftime lead.

According to stats kept by Mark Chreene’s KASO/KBEF radio crew, Minden compiled 520 total yards, including 373 rushing, to 180 for Bossier.

Michael Green led Bossier with 54 yards rushing on 16 carries. Daniel Moore gained 49 yards on nine carries and scored the Bearkats’ only touchdown on an 8-yard run with 51 seconds left in the game. Roderick Francis had 37 yards on four carries.

Trent McLaughlin completed four passes and three of those went for touchdowns. Jacareon Lathan caught two of them.

Bossier closes the season Friday at undefeated Northwood (9-0, 6-0), which clinched a share of the district title with a 48-14 victory over Booker T. Washington Thursday night.