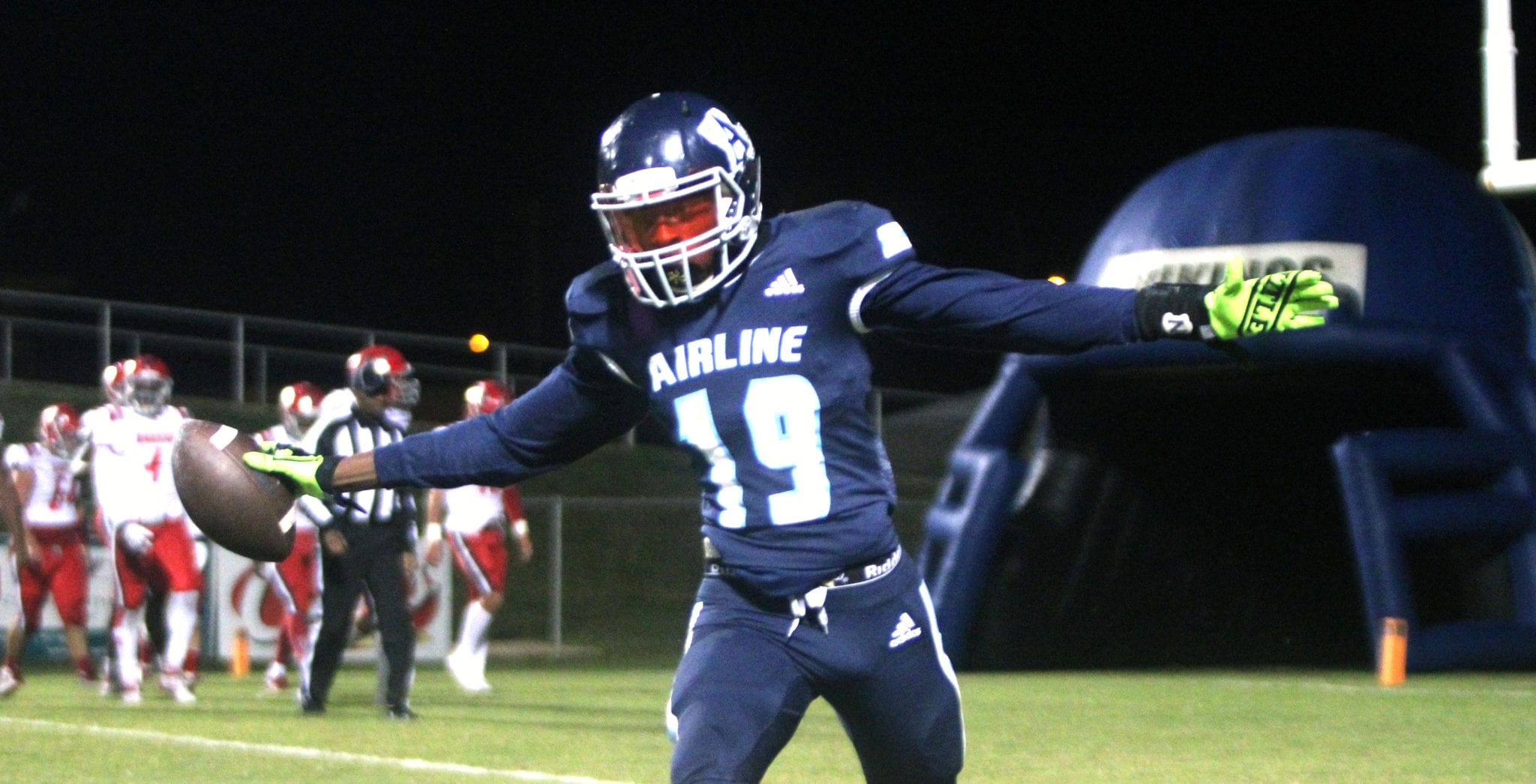 Those who saw it — especially Airline fans — will long remember Daniel Smith’s tackle-breaking, go-ahead touchdown catch-and-run in the Vikings’ 22-19 victory over the Haughton Buccaneers Friday night at M.D. Ray Field at Airline Stadium.

It was a spectacular individual effort with about half of the Haughton defense having a shot at Smith before he crossed the goalline, completing the 64-yard play with 4:28 left in the game.

But there were plenty of outstanding efforts from players on both teams in a great game on a near perfect night for football with temperatures hovering in the low 50s.

Haughton was one of the preseason favorites to win the district title along with Captain Shreve.

Airline head coach Bo Meeks believed that was a fair assessment, but he also knew his team couldn’t be counted out.

“I think Haughton and Shreve deserve the praise they have gotten,” he said. “Haughton’s an outstanding football team, well-coached, great players.

“But our guys wanted to come play and prove a point tonight. I couldn’t be prouder. The way they overcame adversity down twice in the second half. Great win for our program. Coaches had a great game plan and the kids executed really, really well.”

Said Haughton head coach Jason Brotherton: “It was a good high school football game. Kind of sloppy for us. They were well prepared, did a great job like they always do. The style they play is not what we like to see. But great job by them. They were ready to play and played well and came out on top. … Our kids fought hard, fought back and got the lead and they made another great play. We just never could really get any distance ahead of them. It’s frustrating but we’ll get back to work on Monday.”

Haughton rallied from a 7-0 halftime deficit and twice took the lead in the second half. Airline came back twice.

Both defenses were outstanding but the offensive players made plays.

Of course, in a game like this, you can’t forget about the all-important conversions.

Airline’s Jackson Tinkis made two extra-point kicks and the Vikings scored a two-point conversion after their third touchdown for the 22-19 cushion.

Haughton’s Carter Jensen made one PAT. Airline blocked the other attempt. The Bucs tried a fake kick after their third touchdown but a pass fell incomplete.

As Brotherton pointed out, for the second year in a row the Bucs and Vikings scored the same amount of touchdowns and Airline won. Last year, it was 35-32.

Quarterback Alex Garcia and tight end Devin Bilbo were among Airline’s heroes. Garcia hit Bilbo for touchdowns of 38 and 60 yards. On the second one, Bilbo was running by himself.

The Airline defensive line, led by big No. 99 Devarrick Woods, kept Haughton quarterback Peyton Stovall on the move and shut down the Bucs’ running game.

“I think one of the things is when we play we’ve got to be aggressive,” Meeks said. “I think a lot of people against Haughton sit back and try to keep them in front and with the athletes they have that can be a problem. And our guys were on the front foot on both sides of the ball. Just really proud of the plays they made a giving us a chance to win.”

Despite Airline’s aggressive defense, the Bucs playmakers still did what they’ve been doing all season in the second half.

Whitten made two incredible catches for touchdowns, laying out for the first one and leaping in the back of the end for the second. The latter, a 4-yarder, gave the Bucs a 19-14 lead with 36 seconds left in the third quarter.

Sweeney made a nice reception down the sideline that set up a touchdown.

McWilliams didn’t catch a TD pass but he threw one. One fourth down, he took a pitchout from Stovall, who slipped around the left end and was all alone in the end zone. Stovall caught the pass for the Bucs’ first TD and Jensen’s PAT tied it at 7 with 6:49 left in the third quarter.

Airline kept the Bucs’ explosive offense in check in the first half. The majority of Haughton’s first downs came on penalties.

“Their ability to roll up and play a lot of man coverage, it’s hard to get a lot of separation,” Brotherton said. “They take away your easy stuff. Great game plan by them. It was what we expected. They give you some chances for big plays and we missed a bunch of big plays.”

The Vikings were blessed with great field position in the first half. But they didn’t score until Garcia hit Bilbo who sprinted down the Haughton sideline with 1:26 left in the first quarter.

Airline had a chance to take a two-touchdown lead into the locker room after a pass completion to the Haughton 1 in the final minute. But the Bucs recovered a fumbled snap. That was just after the Vikings had a touchdown pass erased by a penalty.

Now back to Smith’s touchdown. He took a short pass from Garcia behind the line. It looked like he was going to be tackled for a loss or a short gain, but he somehow made it through three Haughton defenders.

Two more Bucs had a shot at him about 10 yards downfield. Another made a valiant diving effort at his feet about 15 yards from the goalline to no avail.

Smith summed it up this way.

“I knew we needed a play,” he said. “When I caught the ball I saw what I could do with the ball and I just did it and took it home.”

Garcia didn’t expect the play to be a touchdown after he released the ball, but he wasn’t surprised it turned out that way.

“Dan makes plays like that every week,” Garcia said. “When I gave it to him I was like, uhnn, but players we’ve got like Dan, huge player, we expect those things out of them. That was huge for us.”

Haughton had three more possessions after Smith’s touchdown. Smith and Brian Marshall had interceptions on the first two and the Bucs turned it over on downs on thie third one.

Garcia knew that coming in to the game the Vikings were the underdogs. That just gave them a little extra incentive.

“A lot of people counted us out this game but we knew we could get it done,” he said. “It was a hard-fought game. We knew we had to come in here and execute very well, great team. I think it’s a huge win for us especially a lot of momentum shift for the rest of the season for our goal in district.”