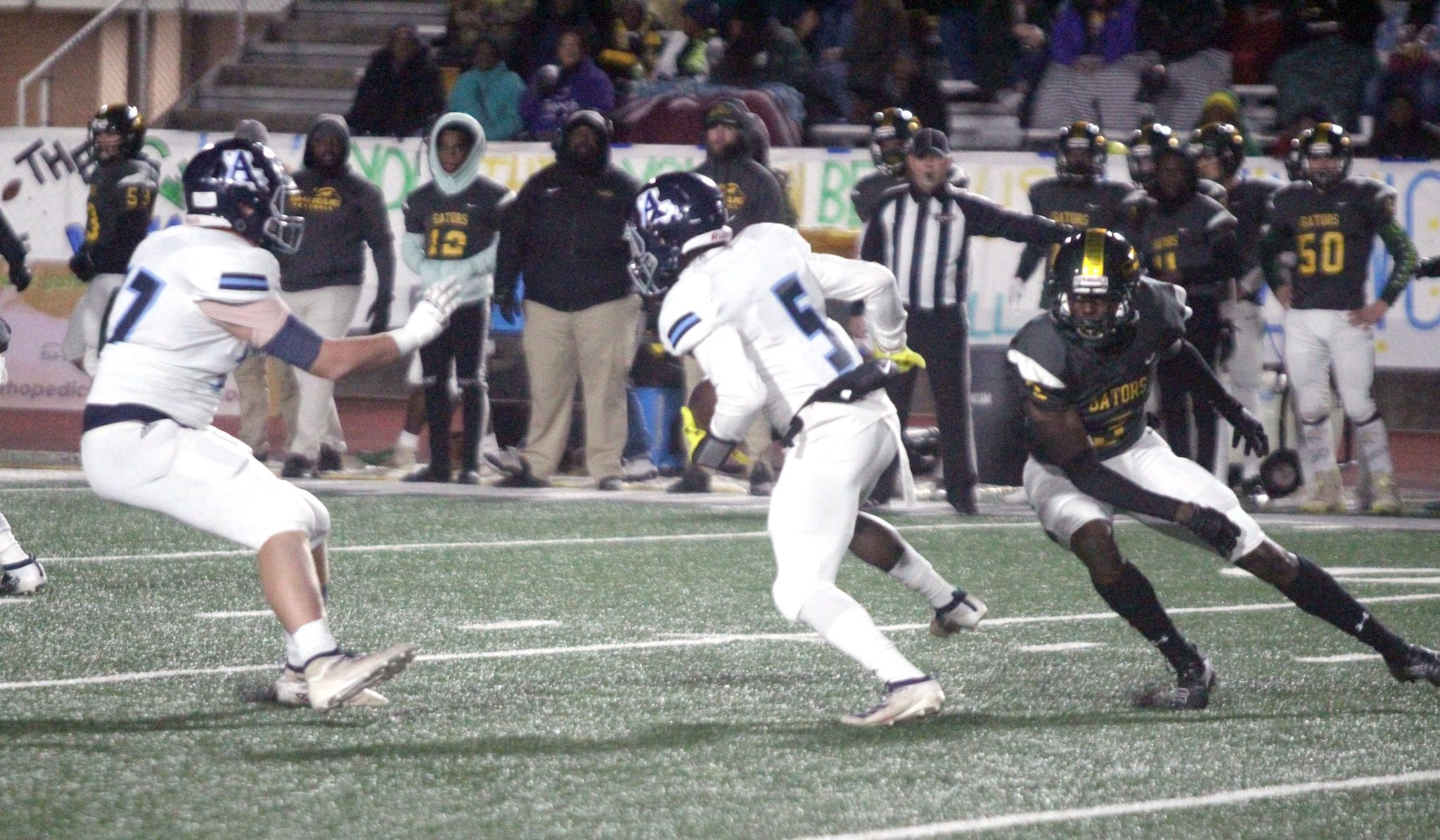 Airline earned a share of the District 1-5A championhip with Captain Shreve on Friday night, handing the Gators their first district loss 21-14 at Lee Hedges Stadium.

The Vikings finished the regular season 8-2 overall and 6-1 in district. The Gators finished with the same records.

Airline and Shreve will go down as the 2019 district co-champions. But the operative word is “champions.” That’s what both teams are, and they played like it Friday.

“Two outstanding football teams,” Airline head coach Bo Meeks said. “What a great effort by Shreve tonight. I’m so proud of our guys. I’m as speechless as I can be.”

After Brian Marshall’s interception with 45 seconds left sealed the victory, the Vikings erupted in celebration.

Despite temperatures in the 40s, they poured a container filled with a sports drink — the traditional “Gatorade shower” — over Meeks’ said.

Meeks could barely contain his emotions, both in his postgame comments to the media and his speech to his players. As usual, he put his focus on them.

“I couldn’t be more proud, just so excited for them,” he said. “Everything they set out to accomplish, they did tonight. Against all odds, three wins last year, Shreve and Haughton being the front runners — we beat them both.”

Senior wide receiver Daniel Smith, who caught two touchdown passes including the game-winner with 1:25 left, said the championship is the result of the work the Vikings put in during the offseason.

“I’m really excited,” he said. “It’s a big change from last year. We were 3-7 at the end of last season. But we knew all offseason we had to come back way stronger. We were grinding all summer. And we made it here. We’re winning game after game after game. We got that rhythm in. That’s what we did. Just kept winning games.”

Said Airline junior defensive back Tracy Hudson: “We all put our trust in each other and we made something happen.”

The district title is the first for Airline since 2012 when the Vikings shared it with Parkway and Byrd.

It was Shreve’s first since 2005 when the Gators were in Class 4A and first ever in District 1-5A.

Both teams will be playing at home in the first round of the playoffs.

The victory over an 8-1 team vaulted the Vikings to No. 8 in unofficial 5A power rankings posted Saturday on the LHSAA website.

But nothing is set in stone until the LHSAA releases its final official power rankings and pairings Sunday.

Overtime looked inevitable with the game tied at 14 in the fourth quarter. But the Vikings had other ideas.

After forcing a punt, Airline took over on its 33 with 3:15 left. A pass interference penalty moved the Vikings to near midfield.

Alex Garcia hit tight end Devin Bilbo near the Vikings sideline and he took it to the Shreve 24. Bilbo got to the 15 after catching another pass. A run moved the ball to the 7, giving Airline a first-and-goal.

After a two-yard loss, Garcia scrambled back and lofted a pass to Smith running across the field in the front of the end zone. He made the grab for the touchdown. Jackson Tinkis’ third PAT it 21-14 with 1:25 left in the game.

“It’s what we’ve done all year in big games,” he said. “We make it a little hard in ourselves. Shreve makes it hard on us obviously. They’re a great football team, but when we had to have it Alex stepped up and at the same time the offensive line stepped up. We ran the ball when we needed to and made plays on the perimeter like we have all year long.”

The Airline defense dominated the first half, holding to Gators to 47 yards on 28 plays, according to statistics kept by Lee Hiller for the Shreve radio broadcast.

The Vikings scored on a 32-yard pass from Garcia to Smith with 1:27 left in the first quarter that was similar to the winning TD except longer.

It looked like 7-0 would be the halftime score. But Nick Allen intercepted a Garcia pass and returned it 53 yards for a touchdown with 3:00 left.

The Gators threatened to take the lead in the third quarter, driving from their 15 to a first down at the Airline 17. But on fourth-and-1, Shreve quarterback Darrius Grant fumbled the snap and Airline held.

The Vikings also picked up a Shreve fumble in the red zone early in the game, ending a scoring threat.

“Defensively, what an unbelievable effort,” Meeks said. “I couldn’t be more prouder of the way those guys played tonight.”

Airline broke the tie with an 80-yard touchdown drive late in the third quarter. Bilbo caught a couple of passes and Jamal Johnson had a couple of good runs.

Rovelle Young took it in the end zone from the 3 and Airline led 14-7 with 28 seconds left in the third.

Shreve answered with a long drive in the fourth. DJ Fleming, who had some nice gains, scored on a 2-yard run and Gage Simpson’s PAT tied it at 14 with 8:18 left.

That set up the dramatic finish.

Garcia had an outstanding game, completing 22 of 37 passes for 261 yards.

Bilbo had his best game of the season, catching eight passes  for 103 yards. Kevin Pouncy had five catches for 71 yards, Smith six of 67 and Thomas Williams three for 20.

Fleming, one of the area’s top backs, finished with 92 yards on 24 carries. But the Vikings kept the speedster from breaking a long one.