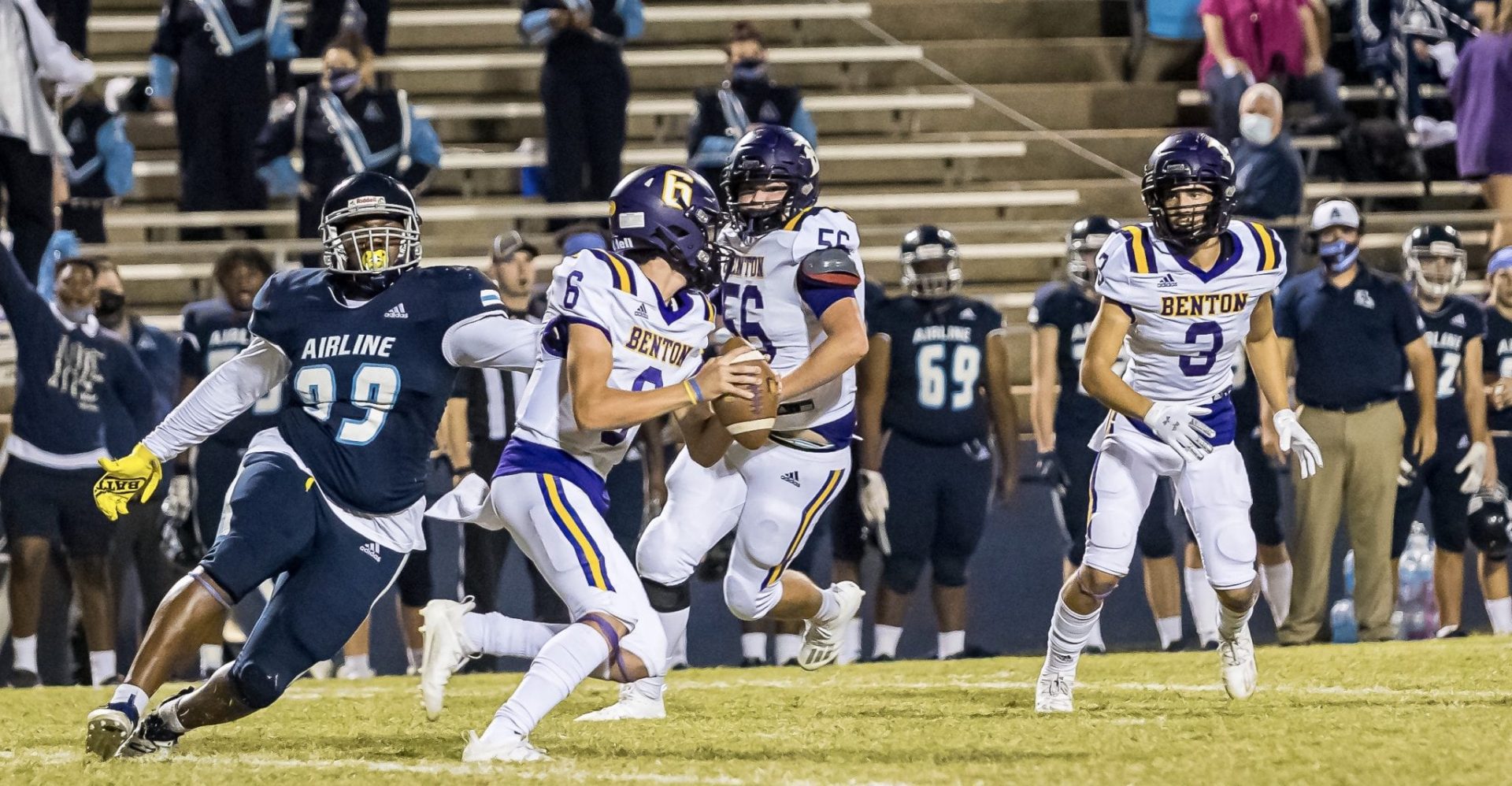 Friday night’s game between Airline and Benton at M.D.Ray Field at Airline Stadium was a reminder of why there was such a big push by so many to make sure there would be a 2020 season when it appeared in doubt.

It was the kind of game in which memories are made regardless of which side you were on.

It’s a cliche, but it’s a shame someone had to lose.

In a game with six lead changes in the second half, Airline pulled out a 31-28 victory.

Benton dropped to 1-4 overall and 1-3 in 1-5A. All five of the Tigers’ games have been decided  by seven points or less. Benton’s four losses are by a combined 14 points.

“That was a great game,” Airline head coach Bo Meeks said. “Two close rivals got after it. Just a heck of a battle. Coach (Reynolds) Moore and Benton had a great plan, played extremely hard. Just proud of our guys for finding a way to get it done.

“Just a tremendous effort by all of our coaches and players. It was just a fantastic win for our program.”

The game wasn’t without a bit of controversy.

After Benton took a 28-24 lead on Ashur Hall’s 1-yard run and RJ Moore’s PAT with 6:20 left in the game, the Tigers recovered a fumble on the kickoff return at the their 45. But Benton was flagged for grasping the facemask before the fumble.

After the officials huddled, they decided to replay the kickoff. This time, Jamall Asberry returned it 67 yards to the Benton 25.

“Big momentum swing with the fumble,” Moore said. “Right there had the ball at midfield up four. Then all of a sudden you’ve got to rekick. No matter what the call is, right or wrong, it’s tough to bounce back from that.”

Airline quarterback Alex Garcia ran 11 yards to the 14. Then Rovelle Young went around the right end for the go-ahead touchdown. Jackson Tinkis’ fourth PAT gave the Vikings the 31-28 with 5:18 left.

Benton then advanced to a first down at its 45. But a run on first down resulted in a 6-yard loss. On second down, Gavin Morales sacked Gray Walters. After an incomplete pass, the Tigers punted.

Airline picked up a first down on a run by Asberry and ran out the clock for the victory.

For the second straight year, Benton saw a fourth-quarter lead disappear. Last season, Airline rallied from a 16-7 deficit to win 29-16.

But Moore was proud of the way his team came back from an early 10-0 deficit.

“One thing I will say about our kids is they will not quit,” he said. “They don’t. And it’s easy when you start getting down. Down 10-0 right there early, it would be easy to say, ‘Here we go again; we’re going to lose.’ They fight through it.”

Airline scored on its second drive of the game with Tinkis booting a 38-yard field goal. A 49-yard pass from Garcia to Devin Bilbo put the Vikings in scoring position.

On Airline’s next possession, Garcia hit Daxton Chavez for 30 yards to the Benton 28. Bryson Turner scored from 20 yards out on a perfectly executed reverse.

Benton struggled on offense early. The Tigers finally came alive midway through the second quarter, driving to the Airline 25. The Vikings held but the Tigers gained some confidence.

On Benton’s next possession Walters found Evan Cole for a 33-yard completion to the Airline 37. After a penalty moved the ball back to the 42, Walters scrambled to his left and fired downfield to Cole, who caught the ball at the 2 and scored.

The second half was a flurry of lead changes.

Benton took the opening kickoff and drove 80 yards for a TD. Dane Stearns stretched for a 41-yard catch that put the Tigers at the Airline 37. Walters then hit Moore for 22 yards.

Airline answered quickly. After getting a kickoff return to the Benton 48, the Vikings regained the lead on a 29-yard pass from Garcia to Chavez.

Benton came right back. Runs by Walters and Caleb Hood moved the ball to the 9. Hall, the Tigers middle linebacker and power running back, gained seven yards then scored on the next play. Moore’s PAT put Benton on top 21-17 with 2:08 left in the third.

Back came the Vikings. Garcia and Jaden Williams connected for 29 yards to the Tigers 24. The Vikings faced a fourth-and-3 at the 18 early in the fourth. Garcia passed to Williams over the middle. He broke a tackle at the 11 and made it to the 1. Asberry scored on the next play.

Ahead 24-21, Airline forced a punt. Penalties moved the Vikings back to the 27. Garcia completed a short pass that was fumbled after a hard hit. The Tigers recovered at the 25.

After a penalty moved Benton back to the 30, Walters hit Pearce Russell for 16 yards to the 14.

Hall did the rest, carrying the ball three straight times to the end zone and giving Benton the 28-24 lead.

That set up Airline’s final comeback.

Meeks was pleased with how his offense kept responding and that so many players contributed.

“All of our offensive skill players tonight from Alex to the receivers to the running backs, Jamall and Rovelle both,” he said.  “It was just a huge night tonight for the offensive skill guys.

“We had some trouble early establishing the run. Part of that is Benton. They’re good up front. We hit a couple of passes to get us some points. In the second half we were able to do a better job of establishing the run. That allowed us to do some more things and be more consistent more than anything else.”

Moore was impressed by the performances of his underclasmen. Walters and Russell are sophomores. Cole and Hood are juniors.

“I really see a lot of promise with our young guys,” Moore said. “Our seniors have kept us in these games. Our seniors continue to lead the way. But these young guys, they’re learning, figuring it out. You think about every week you’re getting better. You’re giving them more experience. And if that ends up being a playoff trip in two weeks then I think that huge and if it doesn’t I think our underclassmen are showing a ton of promise. Kind of giving you a preview of what’s coming. Gets you feeling good about the future.”

Cole played defensive back as well as receiver, replacing a player out for contact tracing.

Airline closes out the regular season Friday at home against Captain Shreve. The Gators (4-3, 4-2) lost to Byrd 28-7 Thursday night.

According to GeauxPreps.com, Airline was No. 27 in the Class 5A power rankings with several games to be played Saturday in South Louisiana. A victory over Shreve will ensure the Vikings a playoff berth and they will probably get in even if they lose.

The Tigers were No. 34 in the 5A rankings. The top 32 in the final rankings make the playoffs.