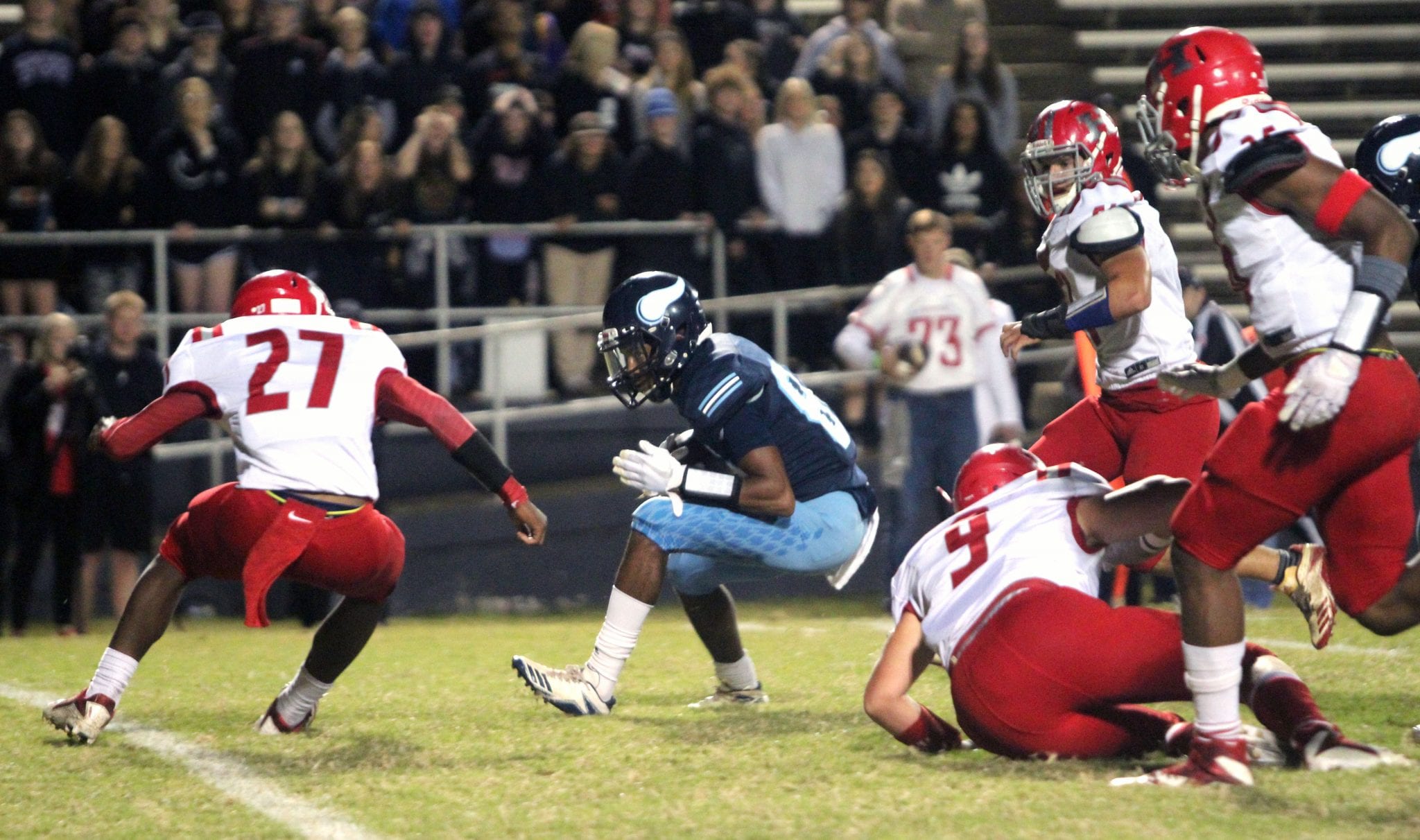 Airline coach Bo Meeks said it in his postgame speech to his players.

If Friday night’s 35-32 victory over the Haughton Buccaneers at M.D. Ray Field at Airline Stadium was the seniors’ final game, what a way to go out.

The Vikings finished the regular season 3-7 overall and 2-4 in District 1-5A. Six of Airline’s games were decided by 10 points or less and the Vikings lost five of those.

Airline’s playoff chances appeared to be all but gone after last week’s loss to Byrd. But that was not the case.

According to louisianasportsline.com, Airline was No. 33 in the 5A power rankings, only two one-hundredths (.02) of a point behind Pineville, as of Saturday afternoon. The top 32 teams make the playoffs. The power rankings won’t be official until the LHSAA releases them Sunday morning.

After the game, Meeks wasn’t concerned about the playoffs. He was just happy his players finished on a high note in what has been a frustrating season.

“I’m extremely proud of our guys, our coaching staff and our players,” Meeks said. “Great week of preparation. We knew what a challenge it was going to be. Haughton’s got an unbelievable football team. Coach (Jason) Brotherton and his staff have done a great job. They’ve had a tremendous year. Just a big opportunity for us tonight. We stepped up to the plate and I couldn’t be prouder of everybody involved.”

Brotherton was equally proud of his team. The loss did nothing to diminish diminish the Bucs’ outstanding season. Haughton rallied from a 28-6 second-quarter deficit and took a 32-28 lead with 4:10 left.

Haughton finished the regular season 8-2, the Bucs’ first eight-win regular season in four years. Haughton and Byrd tied for second in 1-5A at 4-2 behind Evangel Christian, which won its fourth straight title.

Haughton took the 32-28 lead on a 5-yard run by quarterback CJ McWilliams. But the Vikings answered with an 18-yard run by Jamal Johnson with 2:30 left. Airline converted a fourth-and-7 on a pass from Jordan Gladney to Kevin Pouncy.

“I told our kids that I’m really probably as proud of them as I’ve been all year,” Brotherton said. “We didn’t start well, obviously. I’m not sure we were ready to play. But we challenged them at halftime. We said Buccaneers don’t quit. They fought back and fought back and got the lead. Just kind of ran out of gas at the end. That’s a better than 3-7 football team we just played. It was a great high school football game.”

Both teams certainly got great performances from their quarterbacks.

Gladney, a senior, passed for 363 yards, according to The Times, with most of that coming in the first half. He threw four touchdown passes in the first half, two to Pouncy and two to Antavius Freeman. Pouncy is a junior and Freeman a senior.

Pouncy has his best game of the season, catching 10 passes for 154 yards. Gladney’s first TD pass to Freeman came on the first play of the game after the Vikings recovered a high kickoff near the Haughton sideline.

Airline also effectively used wide receiver screens with Pouncy and Freeman using blocks and their speed to sprint past Haughton defenders down the sideline.

McWilliams, a junior, did not even expect to be playing quarterback Friday night. Sophomore Peyton Stovall, who missed the last two games with a sprained joint in his right (throwing) shoulder, returned as the starter against Airline and McWilliams returned to his usual wide receiver position.

But Stovall re-injured his shoulder and only played three series before being replaced by McWilliams midway through the first quarter.

All McWilliams did was account for 414 total yards, according to Haughton stats, and all five touchdowns. He completed 19 of 33 passes for 252 yards and three touchdowns with no interceptions. He also rushed for 162 yards on 25 carries and scored two TDs. The first one covered 27 yards.

“I’ve said all year he’s the best player in Shreveport-Bossier,” Brotherton said. “I’ll hang my hat on that and say it until somebody finally believes me. He can do everything and he gives you 100 percent every play.”

Haughton junior receiver Tristan Sweeney had his best game of the season, catching nine passes for 154 yards. He scored the Bucs’ first touchdown on a 13-yard catch on fourth-and-goal.

Junior Matthew Whitten had his best game of the season with six catches for 79 yards, including a 20-yard TD reception in the third quarter that got the Bucs within eight.

Junior running back Keyshawn Davis caught a 9-yard TD pass that was tipped to get the Bucs within two in the fourth quarter. Davis didn’t have a great night running the ball, but his 32 yards gives him 1,031 for the season.

In the end, though, it was Airline’s night.

In the final two minutes of the game, the Haughton defense held the Vikings, giving the Bucs one last chance. Senior Josh Hensel’s punt was downed at the 5 and Haughton was out of timeouts with 34 seconds to play.

Thanks in part to a great catch, Haughton moved to near midfield. On the final play, a pass fell incomplete around the Airline 20, setting off a Vikings’ celebration.

“Just so proud of our guys to end the regular season on a win like this,” Meeks said. “With a lot of the problems we’ve had throughout the year as far as being able to finish games, to be able to finish the game against an awesome football team, I’m just extremely proud of everybody.

“We made plays when it counted tonight in all three phases. What a punt by Hensel at the end to pin ’em. What an awesome night to be an Airline Viking.”