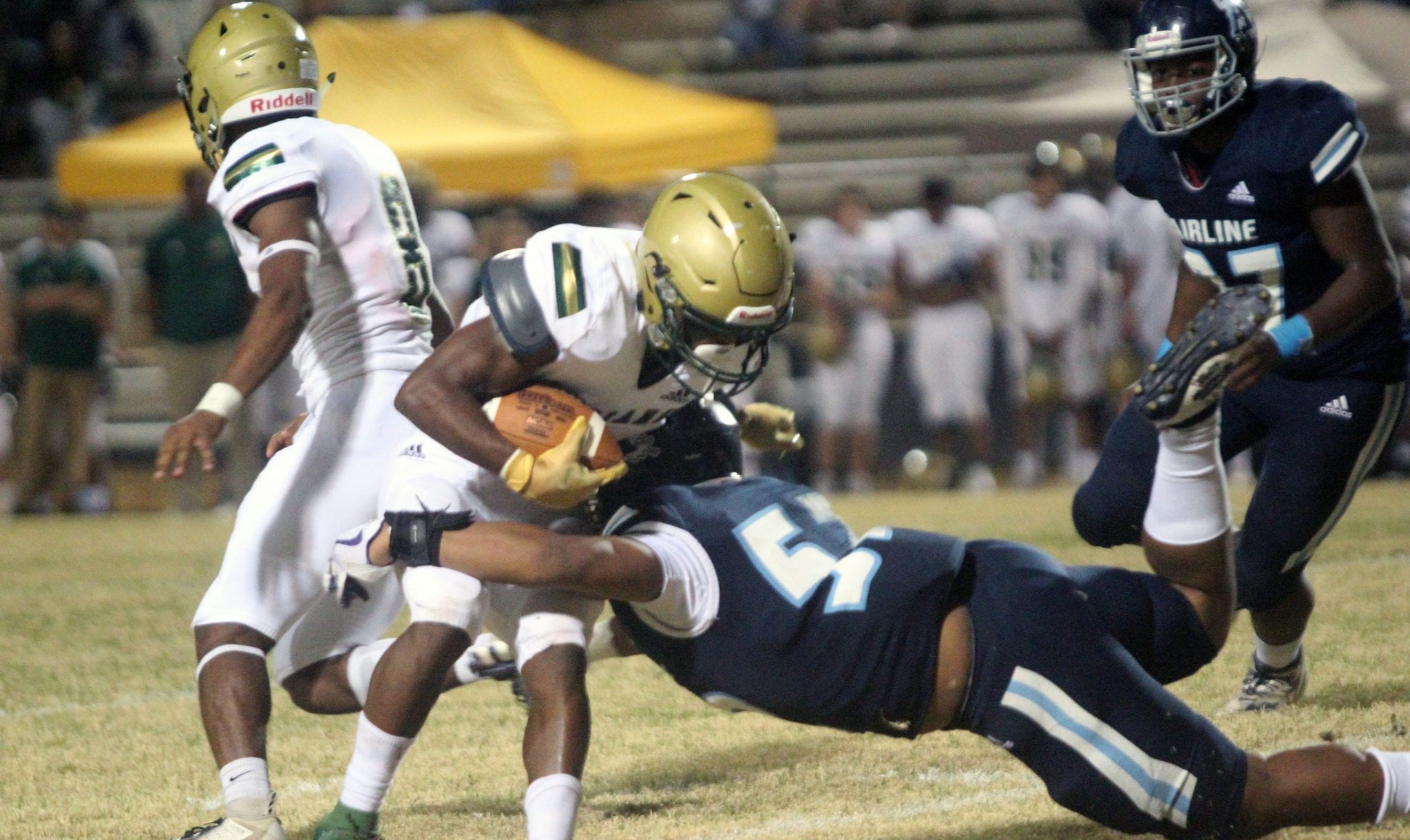 A valiant effort by Airline wasn’t enough as the Vikings fell to No. 1 seed Acadiana 34-7 in the quarterfinals of the Class 5A playoffs before a large crowd Friday night at M.D. Ray Field at Airline Stadium.

District 1-5A co-champion Airline, the No. 8 seed, finished the season 10-3 a year after going 3-7 and barely missing the playoffs.

While obviously disappointed with the loss, Airline head coach Bo Meeks couldn’t be happier with the way the season went.

“To go from 3-7 to 8-2 in the regular season and win the district championship, to make the quarterfinals and finish the season 10-3 — a seven-win improvement,” he said. “That doesn’t happen very often. It speaks to the hard work that our guys put in. Really proud. It made it a really special time. Blessed to be an Airline Viking.”

The Vikings certainly made the Wreckin’ Rams work for the victory.

“I’m just really proud of our guys,” Meeks said.  “I thought we fought hard. It was like all year. We fought hard all year. Acadiana’s got a great football team. A different style from anybody we see up here completely. Until you get in against it you don’t really know what it’s like. Hat’s off to them.”

Acadiana came into the game averaging about 51 points. In their last nine games, the Wreckin’ Rams averaged almost 60.

The 34 points was the their lowest output since Week 3.

Acadiana, which has won four state titles since 2006, has been running the veer option for years with a lot of success. Friday night was no exception.

But at the half, the Vikings trailed just 14-0. The Wreckin’ Rams had a couple of relatively short fields and their second TD came on a 23-yard pass.

“I thought the first half we played great defense,” Meeks said. “We really made them earn those first two scores and the last couple of drives shut them down.”

Aided by a couple of penalties, the Wreckin’ Rams drove 82 yards for a touchdown on their first possession of the second half to go up 21-0.

Airline kept Acadiana from ripping off big gains for the most part. But the Wreckin’ Rams put together some clock-killing drives. Many times, they put themselves in ideal third-and-short situations and converted.

Airline had trouble getting going against a tough Acadiana defense. The Wreckin’ Rams put pressure on quarterback Alex Garcia throughout the game.

After getting off to a slow start, the Vikings did have a couple of chances to score, moving the ball inside the Acadiana 40. But sacks and incomplete passes ended the threats.

“We had opportunities to get in it offensively,” Meeks said. “We just couldn’t make the play we needed to make to get that score to make it a game. In the second half they controlled the clock and we made some mistakes that kind of escalated that.”

Airline lost leading rusher Rovelle Young to a knee injury in the first half. Penalties and an early turnover hurt the Vikings in the second.

Tyvin Zeno led Acadiana with 86 yards rushing on 12 carries, according to statistics kept by The Times. He scored two touchdowns. Dillon Monette and Jeremiah Brooks combined for 113.

Airline got on the board late in the game on a pass from Garcia to Daniel Smith.

Smith is one of 28 seniors that Meeks and his staff will have to say goodbye to. They helped Airline reach the quarterfinals two of the last three years.

The 10 wins this season tied for the most in Meeks’ nine years as head coach.

“Great senior class, did a whole lot for us,” he said. “But we’ve got some really good guys coming back. We’ll enjoy this one and celebrate these guys. The work on next year will start pretty soon, but we’re going to enjoy this one right now.”