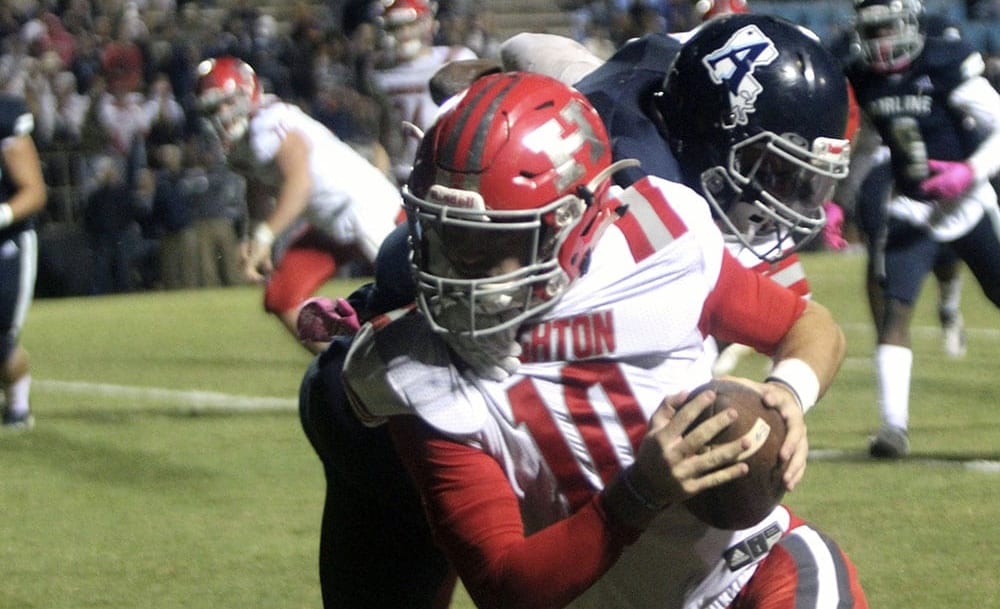 The Airline Vikings and Haughton Buccaneers will try to punch their tickets to the Class 5A quarterfinals tonight.

Airline is looking for is second quarterfinal appearance in the last three years. The Vikings have reached the quarterfinals twice in Bo Meeks’ tenure as head coach.

Haughton is looking for its first quarterfinal appearance as a member of Class 5A. The Bucs last reached the quarterfinals in 2010 when they were in Class 4A and Dak Prescott was the quarterback.

While East St. John is officially 7-4, the Wildcats have the same record as Airline on the field. East St. John forfeited its first three games, including two victories, after self-reporting the use of an ineligible player.

The Wildcats shared the District 7-5A championship with Hahnville, which is still in the playoffs. Both had 5-1 district records. Hahnville defeated East St. John 21-0 in Week 5, the Wildcats’ last loss.

In last week’s win, Sean Shelby completed a 67-yard touchdown pass to Markel August for the go-ahead score with 2:04 left in the game.

Airline’s talented secondary, which had four interceptions against Southside, will be tested. Shelby attempted 36 passes against Central, completing 15 for 347 yards and four touchdowns.

Airline was dominant on both sides of the ball against Southside. The offensive and defensive lines more than did their part.

Jamal Johnson and Rovelle Young had some big runs and some big holes to run through.

Quarterback Alex Garcia gained 73 yards and scored two rushing touchdowns in the second half. He also completed 10 of 18 passes, including a touchdown to Daniel Smith.

Kevin Pouncy caught six passes for 64 yards and scored on an end around. Smith had three receptions for 58 yards.

Haughton’s opponent Comeaux is a member of District 3-5A that includes No. 1 seed Acadiana. The Spartans lost to Acadiana 35-21 in Week 6. That was the Wreckin’ Rams’ closest district game.

Comeaux’s upset of Slidell was the Spartans’ first playoff victory in 10 years.

According to The Advocate, Comeaux only has 40 players on its roster. The school’s enrollment was adversely affected by the opening of Southside in Youngsville in 2017.

Spartans quarterback Tre’ Harris is a Louisiana Tech commit, something he shares with Haughton receiver CJ McWilliams. He threw a couple of TD passes.

He completed touchdown passes to Matthew Whitten and McWilliams and scored on a 1-yard run. Keyshawn Davis had a big game, rushing for 149 yards and a touchdown.

The defense limited the Lions to 174 yards.