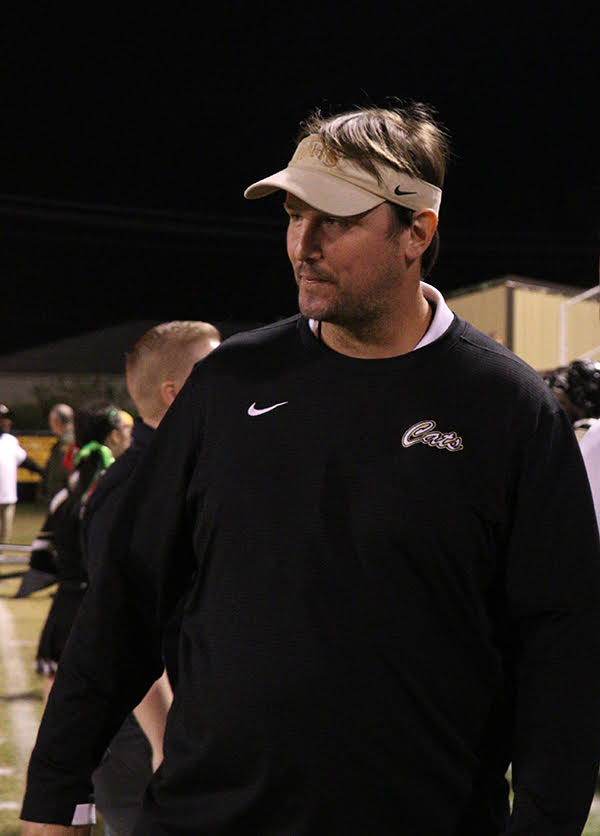 Scogin replaces Bo Meeks, who stepped down earlier this month after 11 seasons. Meeks has since been hired as the offensive coordinator at Mangham.

Scogin has a lot of admiration for Meeks, who was diagnosed with a form of stomach cancer in late 2018. While he has been doing well, one of the reasons he stepped down is because of ongoing treatment that makes it difficult to feel 100 percent every day.

“The program he ran there for 11 years was second to none,” Scogin said. “I just want to build on the success he had at Airline High School and the program that he built. I have a lot of admiration for him.

“He was one of the best friends that I had up there. He was never too bigtime to talk to me when I was an assistant and I appreciate him. I appreciate the job he did at Airline. We’re going to do our best to build upon it.”

Airline and Parkway had some memorable battles during Scogin’s time at Parkway.

He was offensive coordinator under David Feaster from 2012-2016. The Panthers were 55-9 during that time, reaching the Class 5A state championship game in 2013.

After leaving Parkway, he joined the coaching staff at Leesville the next season and has served as offensive coordinator there since then. He has also been the school’s athletic director since 2019.

Scogin began his coaching career at Leesville in 2009 and was there until he took the position at Parkway.

He said becoming a head coach has been a longtime goal providing it was the right fit.

“I’ve always had the dreams and aspirations of being a head coach,” Scogin said Friday afternoon. “But I’ve always wanted to be at the right place. So when Airline did come up I said this is one that I can’t pass up. You know, I have to give this a shot.

“Leesville did everything over the years to keep me here and they treated me great and all that. But Airline I just feel is one of the best places in the whole state football-wise.”

The Vikings went 1-9 last season but were competitive in most games.

“I didn’t really worry too much about the bad season they had last year,” Scogin said. “Airline is competitive year in and year out.”

A big selling point for Scogin was that Airline is one of the state’s largest schools in terms of enrollment. The school’s enrollment figure for reclassification purposes last year was 1,863.

“There’s probably close to a thousand boys that go to Airline high school,” he said. “Thinking back, hey look, if we can find 30 out of a thousand that are really good in football we’re going to be in really good shape.

“And that was one of those kind of things when I thought about it, dang, we have 732 (total students) here (at Leesville) and have been extremely successful. So I said on a larger scale it’s hard to imagine having that many kids. That’s even a huge step up from what we had at Parkway.”

Leesville is a Class 4A school. The Wampus Cats went 8-3 last season, losing to Westgate 16-7 in the second round of the playoffs.

Leesville went 10-2 in Scogin’s first season. The Wampus Cats went 10-0 in the regular season the next year, finishing 13-1 after reaching the semifinals.

During his years at Parkway, Scogin guided some of the most prolific offenses in Northwest Louisiana history. He coached three of the best quarterbacks to come out of Bossier Parish — Brandon Harris, Justin Rogers and Keondre Wudtee.

While Parkway was known for its passing attack, the Panthers also had some of the area’s best running backs.

Scogin plans to have a wide-open offense at Airline to a point.

“The biggest thing is I just want the kids to play hard. That’s been our biggest attribute obviously under Coach Feaster and it was a huge deal here with Coach (Robert) Causey. Going into it regardless of what offense or defense you run or special teams if the kids aren’t playing hard you’re going to get beat either way.”

Scogin plans to begin installing his system during spring practice in May.

Scogin and his wife Bonnie, a former softball coach at Parkway, have one son, 3-year-old Brady. Bonnie was also a standout softball player at Centenary College.

“Coach Scogin is eager to move back to Bossier City and begin working with our student-athletes, our two middle schools, and the North Bossier community,” James said in a press release. “We are excited to welcome Coach Scogin to our family!”