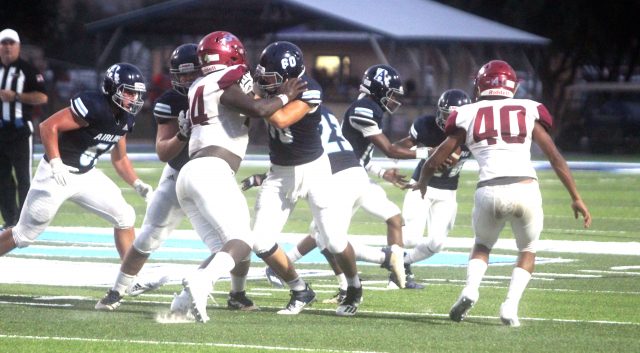 The Airline Vikings fell to the Ouachita Parish Lions 20-3 in a season opener Friday night at M.D. Ray Field at Airline Stadium.

The night began on a high note with a ribbon cutting ceremony for the new artificial turf field. Jerry Juneau, who donated the money for the project, was honored along with his family members. Bossier City Mayor Tommy Chandler also participated as did Airline principal Justin James.

The first quarter went by quickly with both teams mainly keeping the ball on the ground and neither threatening to score.

The Lions finally broke the deadlock midway through the second quarter, scoring on a 27-yard run up the middle on fourth-and-8.

The Vikings’ best chance to score in the first half came after that. Sophomore quarterback Ladarius Epps broke loose for a long gain on a scramble to the Ouachita Parish 30. But Airline couldn’t overcome a holding penalty on first down.

The Vikings had a chance to get even in the third quarter, returning a Lions fumble inside the 5. But they had to settle for a field goal.

Ouachita Parish then added a couple of more touchdowns to pull away.

Airline has a new starting backfield and the Vikings turned in an impressive offensive performance in the jamboree against Haughton last week. But they simply couldn’t get anything going against a tough Ouachita Parish defense.

“They outplayed us,” Airline Head Coach Bo Meeks said. “Disappointed just from a standpoint of feeling like we were prepared, but we just didn’t play well in any of the three phases and that falls on my shoulders. We’ve got to get better and we’re going to come back to work on Monday and get it figured out and be better next week.”

The Lions travel to Farmerville to face Class 3A Union Parish on Friday. The Farmers knocked off defending Class 2A state champion Many 42-37 In their opener.

“We come back Monday and we learn from it,” Meeks said. “We get prepared to go play a very good football team next week and we will be ready.”

“We shot ourselves in the foot offensively,” Plain Dealing Head Coach Christopher Wilson said. “I think we had four or five turnovers. Defensively we had a stop at the beginning of the game. Just the same thing, we don’t tackle well.”

Wilson said the performance of sophomore running back Aaron Reddix was a bright spot.

“Aaron Reddix came in and ran the ball for us for the first time tonight,” Wilson said. “He did a good job.”

Plain Dealing dressed out 18 players to 40 for Class 4A BTW.

The Lions host Homer in a District 1-1A opener Friday night. The Pelicans fell to North Caddo 26-25 in their season opener.