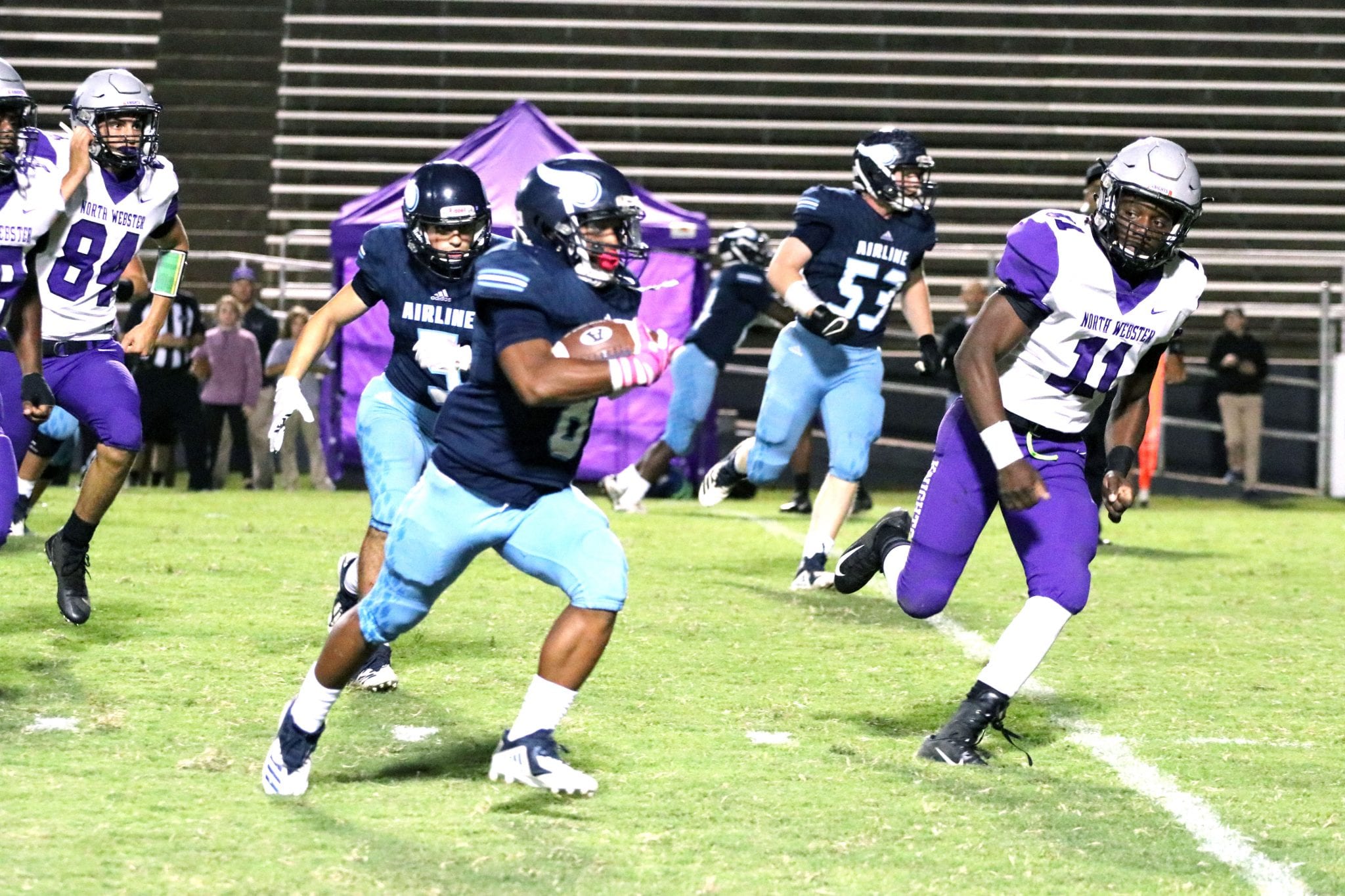 The Airline Vikings cruised to a 56-6 non-district victory over the North Webster Knights on Thursday night at M.D. Ray Field at Airline Stadium.

Airline improved to 2-5. The Vikings resume District 1-5A play next Friday against Captain Shreve (5-2, 1-2) at Lee Hedges Stadium. The Gators lost to Haughton 42-35 Friday night.

While it’s been a frustrating season, Airline coach Bo Meeks believes the victory over North Webster (3-4) can be a catalyst for a strong ending to the regular season.

After facing Shreve, the Vikings close the regular season with home games against Byrd and Haughton.

“We still can finish second place in district,” Meeks said. “From a district standpoint we’re in the same spot we were last year. I think four wins will get in the playoffs and five would put us in a decent spot. But we’ve just got to come out and take care of business against three good football teams left on our schedule. It’s going to be a challenge. We’ve got to continue to improve.”

Meeks praised the Class 3A Knights for their effort, but North Webster proved to be not much of a challenge.

Airline led 28-6 at the half and extended the lead to 49-6 by the end of the third quarter. Reserves saw a lot of action in the second half.

Jamal Johnson, who rushed for 63 yards on just six carries, scored three touchdowns on runs of 6, 17 and 17 yards.

Jordan Gladney, who started at quarterback for the second week in a row, ran nine yards for a touchdown and passed 12 yards to Antavius Freeman for another in the first half.

Gladney completed nine of 12 passes for 125 yards and gained 57 yards rushing on eight carries. Freeman had four catches for 93 yards, including one for 43.

Kaleb Allen scored on a 7-yard run and caught a 23-yard TD pass from Brad Fream. Alex Garcia scored the final TD on a 37-yard run and finished with 57 yards rushing.

Jackson Tinkis was a perfect 8-for-8 on PATs.

“Just pleased with the overall effort,” Meeks said. “I thought we came out and executed well on both sides. They’re well-coached. They play hard. We knew early we were going to have to execute and we did. Did a really good job. We mixed it up pretty well. I thought we ran the ball effectively, which was good.”

The defense also did its part, recovering two early fumbles and basically shutting down the Knights’ offense.