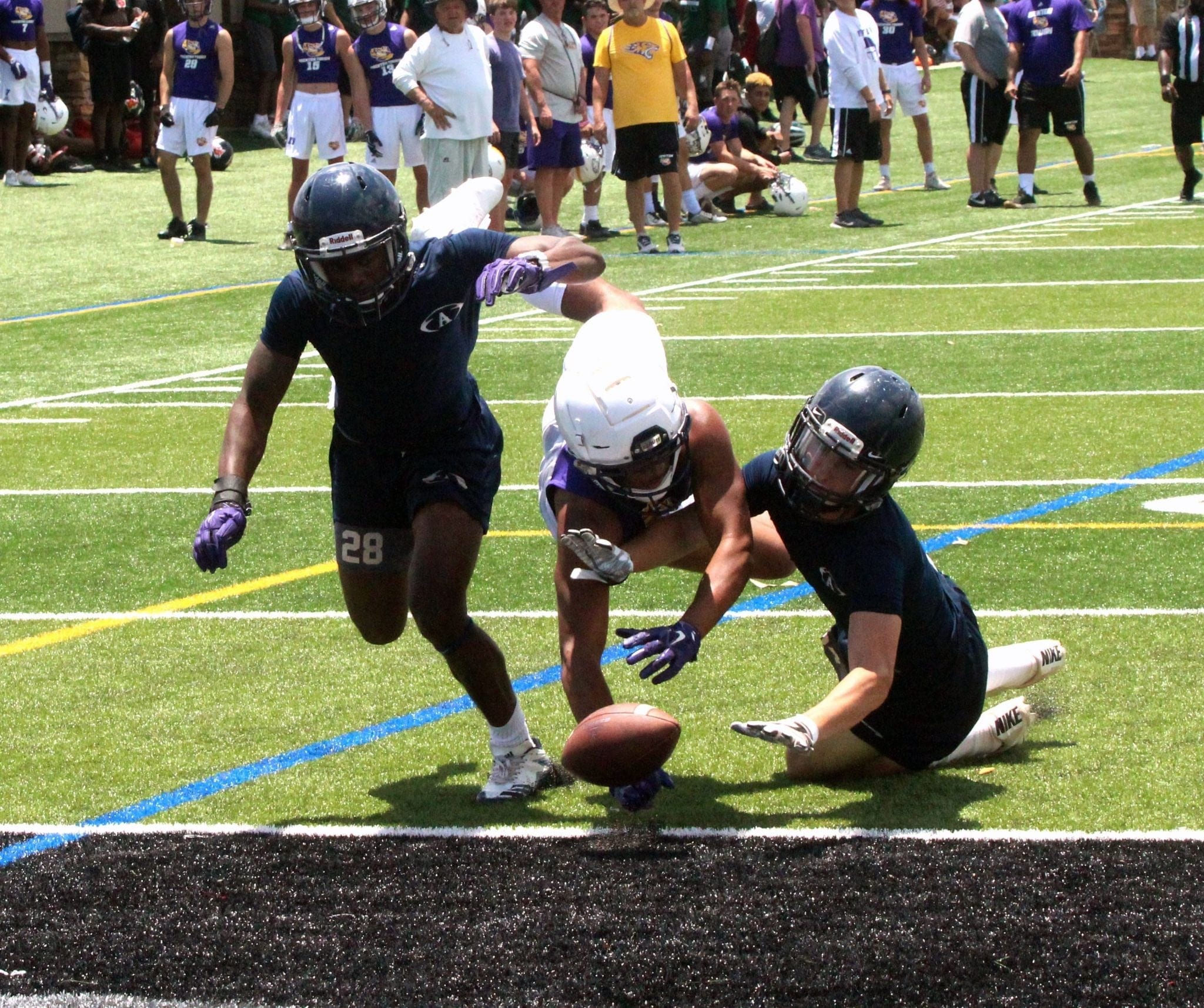 Coming back through the losers’ bracket Saturday, the Airline Vikings finished runner-up in the Hudl Benton 7-on-7 Charity Invitational tournament at Freedom Fields.
After Friday’s pool play, Airline went into Saturday’s 20-team double-elimination tournament seeded 14th.
The Vikings defeated the Huntington JV and then lost to No. 3 Logansport in the second round, falling into the losers’ bracket.
They defeated North Caddo, Lakeside, Mansfield, Calvary, North DeSoto, West Monroe and Huntington to reach the championship round against undefeated Captain Shreve.
Trailing 13-6, the Vikings scored a touchdown with just over a minute remaining to get within one. The ball was placed at the 10 for a conversion attempt worth two points.
The Gators broke up Jordan Gladney’s pass at the goalline and were able to run out the clock for the 13-12 victory.
Shreve, which won for the second time in the last three years, went 5-0 Saturday and 8-1 overall.
The Vikings would’ve had to beat the Gators twice to win the tournament.
After the Shreve game, Airline coach Bo Meeks told his team that he didn’t want them to ever accept losing, but he was proud of the way they competed, winning seven of nine games Saturday.
“The big thing for us with 7-on-7 is all these guys that are new playing this year,” Meeks said. “We don’t have a lot of experience coming back skill-wise. They did a great job this weekend.”
Meeks also liked the improvement he saw from Friday’s pool play to Saturday.
“From yesterday to today was like night at day,” he said. “I’m just proud of the way they competed and how much better they got. We got to play some great teams along the way. A lot of fun and really, really proud of our improvement.”
Meeks alternated quarterbacks Brad Fream and Jordan Gladney. Fream was the starter last season until being sidelined by a late-season injury.
Gladney took over and led the Vikings on a run to the Class 5A quarterfinals.
“I thought both guys played really well all weekend,” Meeks said. “I think both of them are doing a great job of leading our team.
“Both are competing well. I think everybody has confidence in both of them. And that’s what I love. We’ve got the opportunity to have two guys that can play and make us better. Really proud of both of them.”
Meeks also cited receivers Antavious Freeman, Jamal Johnson, Daniel Smith, Carson Slack and Garrison Wade for their play. Freeman is the lone returning starter. Johnson also has some varsity experience.
“All those guys did a great job for us this weekend and got a ton reps so really proud of them,” Meeks said. “I think it’s a talented group. It’s just getting that experience and being ready to play on Friday nights.”
Rising junior Brandon Marshall, a returning starter, was named the tournament’s Defensive MPV.
“The secondary played really well,” Meeks said. “Again, lot of inexperience there. The twins (Brandon and Brian Marshall) are back. Other than that, those guys didn’t play last year so they did a great job of taking each rep and improving from rep to rep.”
Parkway had a good tournament. The Panthers were seeded No. 9 after pool play. They defeated No. 8 St. James in the second round and then knocked off No. 1 Calvary in the winners’ bracket quarterfinals before losing to Shreve.
The Panthers fell to West Monroe in the losers’ bracket semifinals.
Benton, which defeated Airline in pool play Friday, went 2-2 Saturday, defeating North Caddo and the Huntington JV.
Haughton had to withdraw from the tournament. Two key players had a conflict with a showcase baseball event.
All proceeds from the tournament went to the Royal Family Kids charity in Minden.