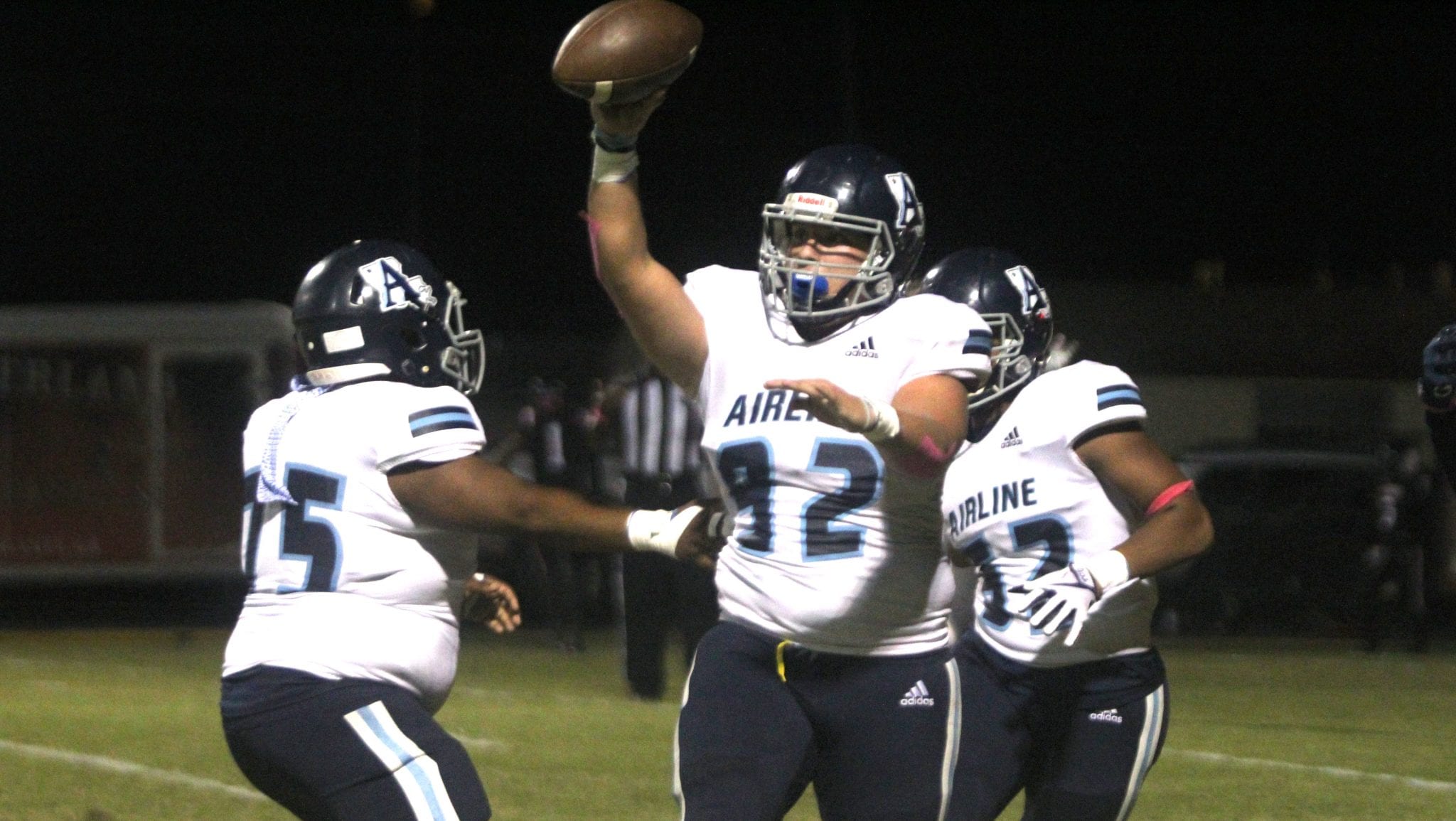 Before Friday night, Airline senior Ben Dillon had never scored a touchdown — not even during his middle school or youth football years.

Considering Dillon is a defensive lineman, that’s not a huge surprise.

“I just get tackles,” Dillon said. “I haven’t ever scored before. It’s always been a dream.”

So when he intercepted an attempted screen pass deep in Parkway territory in the second quarter and saw open field in front of him, he got a little bit excited.

Dillon realized his dream when he reached the end zone.

“It was indescribable,” he said. “It was a surreal feeling. There’s nothing like scoring a touchdown.”

It was that kind of game. Both defenses were outstanding in Airline’s 24-0 victory before a nice crowd at Bobby Marlow Field at Preston Crownover Stadium.

The only offensive touchdown was a 72-yard pass from Alex Garcia to Thomas Williams. That was also the only TD of the second half.

Airline’s Tracy Hudson returned an interception for a touchdown to give the Vikings a 10-0 lead. Dillon’s pick-six and Jackson Tinkis’ second PAT made it 17-0.

Another Vikings lineman, Triveon Wilkins, intercepted a pass on fourth down that stopped Parkway’s most promising first-half drive.

Airline, ranked No. 7 in the Louisiana Sports Writers Association Class 5A poll, improved to 6-1 overall and 4-0 in District 1-5A. The Vikings are tied for first with Captain Shreve (6-1, 4-0).

The victory was Airline’s first over Parkway since 2012.

“Huge win,” Airline head coach Bo Meeks said. “It’s been tough year in and year out. Parkway has been a thorn in our side and that’s due to great kids and great coaching. We knew tonight was going to be a challenge.”

Said Parkway coach Neil May: “At the end of the day my assessment is our defense played really well. We’ve got a lot to do to get better on offense. We did not execute very well tonight and that’s something we’re going to have to get better at.”

“Two pick-sixes, those are gamechangers. Even with that I felt like we were playing well enough defensively.”

All three of Airline’s interceptions in the first half were at least partly the result of heavy pressure on quarterback Gabe Larry.

To Larry’s credit, he continued to battle in the second half, trying to make plays scrambling. But the Vikings simply made it difficult for him to break loose.

Parkway almost averted the shutout in the fourth quarter. But the Panthers fumbled near the goalline on a pass completion and the Vikings recovered in the end zone.

The Panthers finished with 214 total yards.

Airline had 249, according to Parkway statistics, with 72 of that coming on the TD pass to Williams.

Airline quarterback Alex Garcia didn’t have his best night, passing for 177 yards, but he did a nice job punting. His 68-yard punt in the second quarter was downed at the 3. That led to Hudson’s pick-six.

“The kids came out and defensively from the opening whistle to the final whistle it was an unbelievable effort,” Meeks said. “So proud of them. When your defense scores 14 points you’re on your way to winning. Offensively we struggled at times. A lot of that has to do with their defense. They’re really good up front. I’m really proud of our effort overall though.”

Per Parkway stats, senior linebacker Adam Johnson led the Panthers with 10 tackles (three solo, seven assists). Connor Norcross and Deangelo McCoy were both in on nine. Ty Shelton and Trenton Defatta were in on six each.

While Meeks is pleased with the position his team is in with three games left in the regular season, he knows the stretch run will be a challenge.

“We knew going into the district period but especially this final five we knew what we had in front of us,” he said. “Byrd has been a thorn in our side just like Parkway. So we’ve got to prepare. We’ve got to be ready. We’ve got to prepare next Friday night at home to play our best to try to get to 1-0 next week.”

At the end of each Parkway home game, a Player of the Game is announced. That honor went to the head coach Friday night.

May expressed his gratitude for the support he has received.

“My family has been very supportive, my immediate family and my South Bossier family,” he said. “South Bossier has opened their arms to me and my wife and kids and been with me through this whole process losing my father. I can’t thank them enough.”