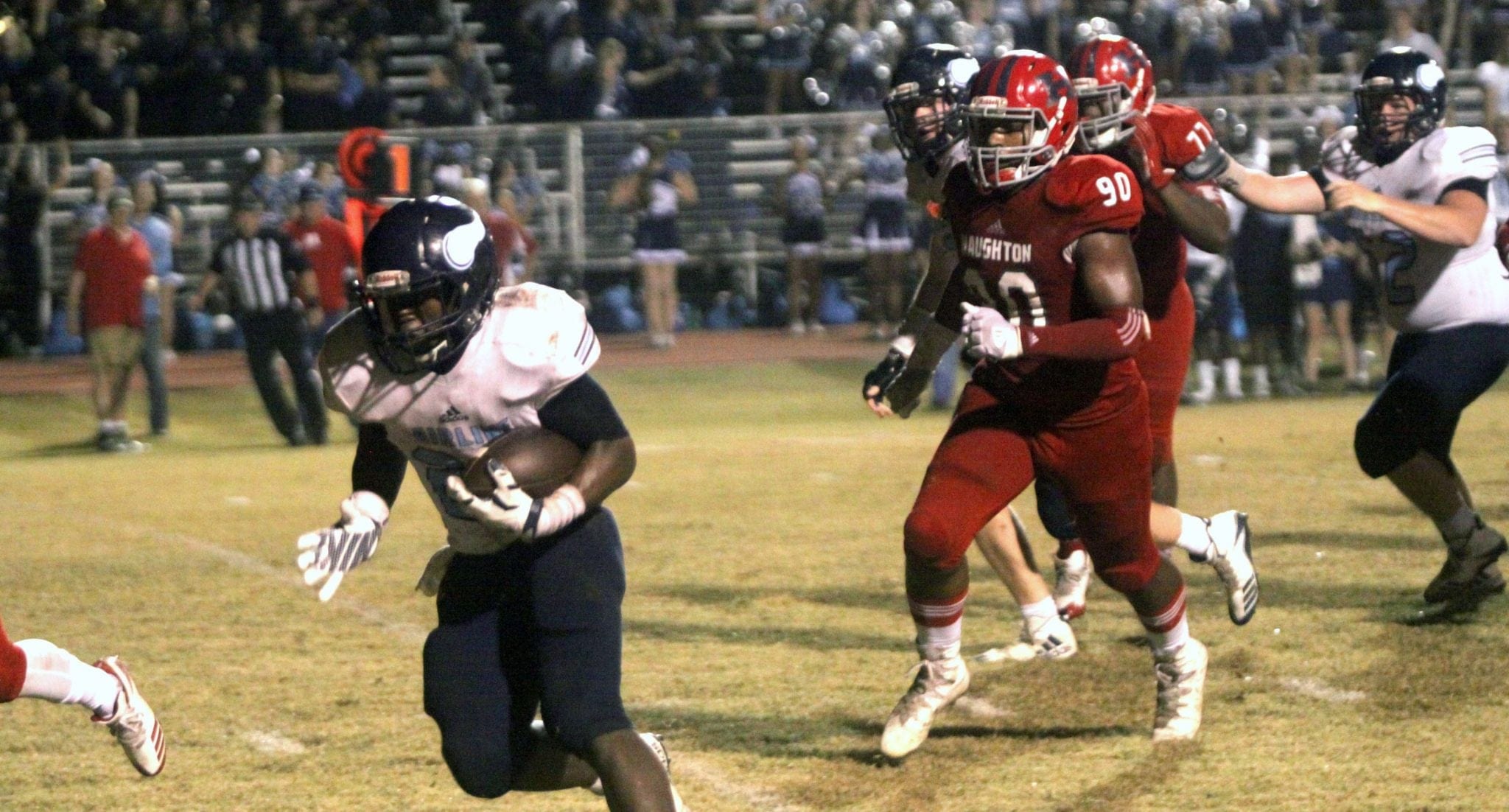 One of the things Airline coach Bo Meeks stresses is finishing strong.

That’s exactly what the Vikings did both in Friday’s 35-21 Diatrict 1-5A victory over the Haughton Buccaneers at Harold E. Harlan Stadium and the regular season.

After the Bucs tied the game at 14 in the third quarter, the Vikings outscored them 21-7 down the stretch.

Airline (7-3, 4-2) finished the regular season with four straight wins. The Vikings will be at home in the first round of the playoffs and could be seeded as high as No. 11.

Haughton and Airline finished tied for second behind Evangel in District 1-5A.

The playoffs, though, were the furthest thing from anyone’s mind during a scary moment late in the first half.

Haughton senior quarterback Cameron Townsend, who has had an outstanding season, took an apparent knee to the head on a tackle and was motionless on the ground.

The game was delayed for about 20 minutes as Townsend was attended to. He was put on a stretcher and taken by ambulance to a hospital.

Townsend, who had movement in his extremities on the field, gave a thumbs up to the crowd as he was leaving. Haughton officials said he was taken to the hospital as a precautionary measure.

“He had a sprain C3, C4 (vertebrae) and a concussion,” Couvillion said.

McWilliams caught a 10-yard touchdown pass from Townsend for the first score of the game. After replacing Townsend, he completed nine of 11 passes for 131 yards.

But it was Airline’s night.

Just four weeks ago Airline was 3-3 after back-to-back losses to Parkway and Evangel.

“I couldn’t be prouder of this group of guys to finish the way we did,” Meeks said. “We were sitting there at 3-3 with some really tough games left in those four and the guys, they rallied together and never panicked. They just continued to get better, took advantage of practice each week and we’ve seen the results the last four weeks, particularly these last two against two great football teams.”

Junior quarterback Jordan Gladney, making his third start in place of injured Brad Fream, threw touchdown passes of 12 yards Antavious Freeman and 50 to CJ George in the second quarter as the Vikings rallied from a 7-0 deficit to take a 14-7 halftime lead.

“He played really well,” Meeks said of Gladney “I was really pleased with him tonight — played poised, had some tremendous runs when we really needed them. He was great.

“JoJo was phenomenal. He had an awesome night tonight. And the offensive line settled in and really took over the game in the second half.”

Haughton tied the game on a 91-yard drive that included a McWilliams’ 33-yard completion on third-and-17 from the 2. McWillams scored on a 4-yard run.

Airline answered with a 75-yard TD drive propelled by the running of Gladney and Thomas Williams, who had 66 yards on just five carries. Davis got the TD on a 2-yard run with 35 seconds left in the third quarter.

The Vikings extended the lead to 28-14 on an 80-yard drive capped by a short run by Davis. Gladney had a key scramble on third-and-13 on a play that also included defensive holding.

It took Haughton just 28 seconds to cut the lead back to 7. McWillams hit Emile Cola with two big passes and then found Tristan Sweeney for the 33-yard score with 5:44 left in the game.

But Davis ripped off a 36-yard run and then scored his third TD of the second half from 3 yards out.

Haughton couldn’t get a first down and Airline ran out the clock deep in Bucs territory.

Meeks said it took a complete game from his team to beat the Bucs.

“Hats off to coach (Jason) Brotherton and their team,” he said. “They’re 7-3 for a reason. They’re a very good football team. And they came out swinging and we kind of had to weather the storm. But like we’ve done all year long our guys kept their poise and just kept coming and finally got a few breaks in the wall and made some plays.”

The Airline defense did a good job of slowing down Haughton star running back Lavonta Gipson. He finished with 64 yards on 12 carries but most of that came on two long runs. Kobe Johnson was just one one of the Vikings who made big contributions on defense.

Cola had a big night for the Bucs, catching nine passes for 123 yards.