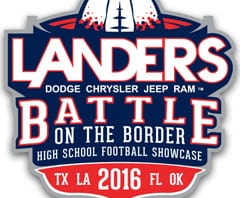 The annual Landers Chrysler Dodge Jeep Ram Battle on the Border has once again attracted some of best football programs from around the state and region to Independence Stadium.
The Battle begins Thursday with a game between Byrd (0-1) and Lafayette St. Thomas More (0-1).
Traditional Louisiana powers River Ridge John Curtis (1-0) and West Monroe (1-0) play the first half of Friday’s doubleheader at 6. Defending Class 4A state champion Monroe Neville (1-0) takes on Evangel Christian (0-1) in the second game.
Warren Easton (0-1) faces Tyler, Texas, John Tyler (2-0) in the opener of Saturday’s tripleheader at noon. That will be followed by Parkway (1-0) vs. Lufkin, Texas (2-0) and Tulsa, Okla., Booker T. Washington (1-1) vs. Bradenton, Fla., IMG Academy (2-0).
IMG Academy is part of a major training center for elite athletes. It originated in 1978 when Nick Bolletieri founded the Nick Bolletieri Tennis Academy, which has trained dozens of top professionals, including former U.S. star Andre Agassi.
IMG, a sports and entertainment company, bought the academy in 1987 and it later expanded into a training facility for other sports.
IMG Academy didn’t field a football team until 2013. It’s ultimate goal is to players to prepare them for the next level.
In just a few years, the program has become one of the nation’s best and not without controversy. IMG is an independent school and has players from across the nation. Some have called it simply an “all-star” team.
Before the 2015 season, Calvary Baptist quarterback Shea Patterson transferred to IMG for his senior season.
Defensive lineman Dylan Moses, who famously committed to LSU as an eighth-grader, transferred there from Baton Rouge Univesity Lab this season.
Moses, like many other Ascenders, is a five-star recruit ranked fifth nationally by ESPN in the Class of 2017.
Dual-threat quarterback Kellen Mond is a Texas A&M commit. Recruiting website Rivals.com ranks him fifth nationally at his position in the Class of 2017.
IMG travels far and wide to play. The Ascenders had a relatively “short” 516-mile trip to Loganville, Ga., to face Grayson, whom they defeated 26-7, in their season opener.
Last week, they defeated Corona, Calif., Centennial 50-49 on a touchdown and two-point conversion with 12 seconds left in a game played in Mission Viejo, Calif.
IMG was No. 3 in USA Today’s Super 25 national rankings at the time, and Centennial was No. 14.
IMG is traveling to Southern California and Virginia Beach, Va., for games later this season.
Booker T. Washington, IMG’s opponent Saturday, opened the season with a 26-23 loss to Edmond Santa Fe and then rebounded last week with a 21-14 victory over Midwest City.
Like the other teams in the event, the Hornets are a traditionally strong program with eight state championships to their credit. The last was in 2010.
BTW has won 10 games in each of the last two seasons.
IMG isn’t the only team in USA Today’s Super 25 the Battle on the Border. John Curtis, which opened the season with a 35-22 victory over Landry-Walker, was ranked No. 12.
John Curtis and West Monroe have combined for 34 state championships. The Rebels opened with a 34-6 victory over Wossman.
Byrd and St. Thomas More have two of the strongest programs in the state, but both fell in season openers.
The Jackets, who do not have a returning starter, lost to Barbe 33-7. The Cougars, last year’s Division II state runners-up, fell to Sulphur 38-35.
Evangel, which has won 11 state championships, fell on the road to Texas power Allen 45-10. Allen was ranked No. 13 in the USA Today Super 25.
Neville, ranked No. 1 in the Louisiana Sports Writers Association Class 4A poll, defeated Ruston 30-14 in its opener. The school has won 10 state titles.
Warren Easton, which fell to Neville 44-26 in the Class 4A semifinals last year, opened its season with a 13-6 loss to New Orleans Jesuit.
John Tyler defeated Plano West 45-14 in its opener and Ennis 30-14 last week.