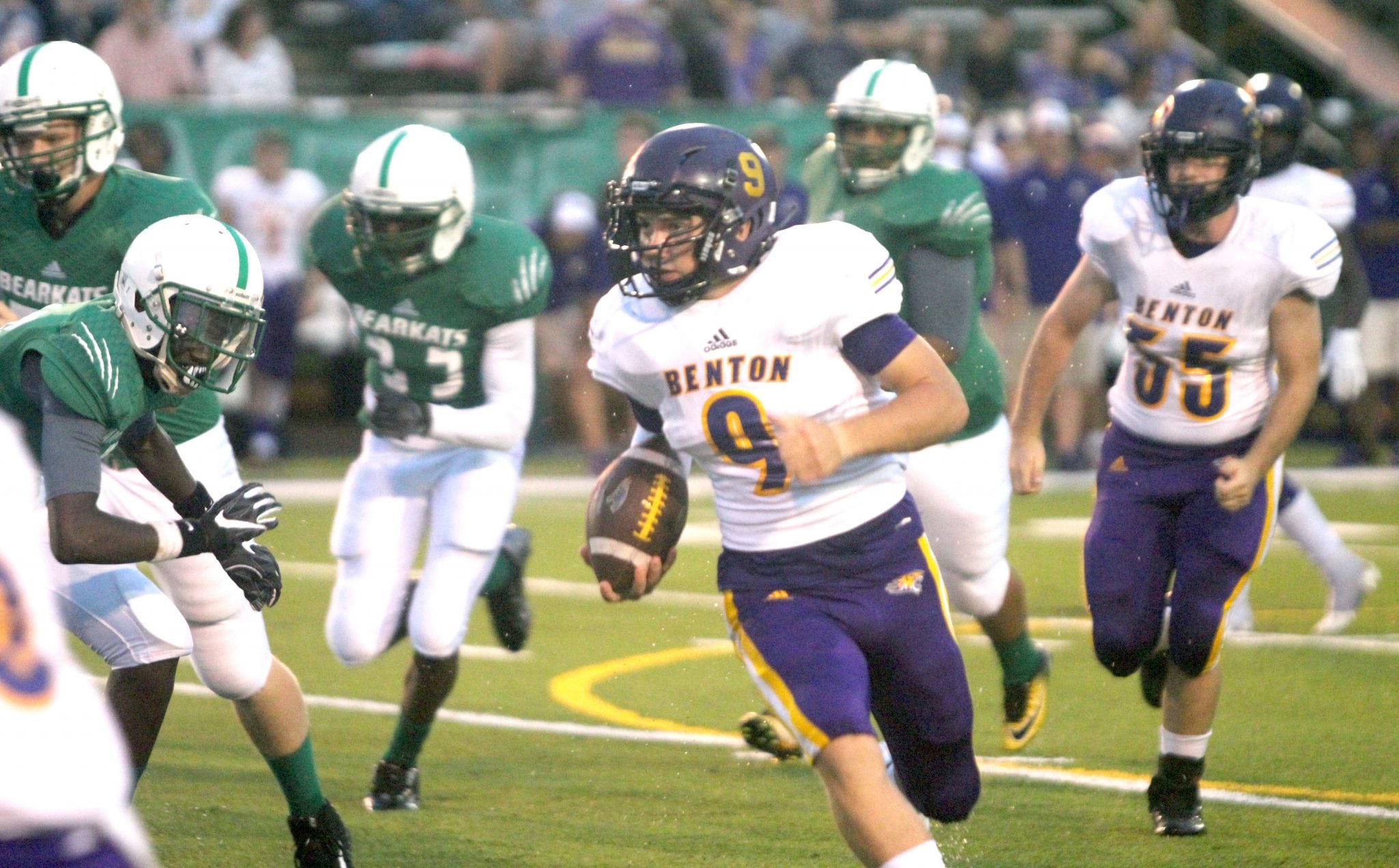 The Benton Tigers defeated an outmanned Bossier Bearkats squad 51-0 in a District 1-4A opener Friday night at Memorial Stadium.

The Tigers improved to 2-2 overall with their second straight victory. The Bearkats dropped to 1-3 with their third straight loss.

Benton got off to a fast start. The Tigers led 13-0 less than two minutes in the game.

On Benton’s first possession, Keldric Moody went up the middle seven yards for a touchdown following a nice run by quarterback Clint Lasiter.

The Tigers immediately got the ball back, recovering a fumble on the kickoff return. One play later, Bubba Osby got past the Bearkats secondary near the Bossier sideline. Lasiter hit him in stride and Osby took it to the end zone.

Benton extended the lead to 20-0 in the second quarter. Malik Antwine caught a short pass near the Tigers bench, broke a tackle and streaked down the sideline for a long touchdown.

“We had some nice throws and catches,” Benton coach Reynolds Moore said.

Osby scored another touchdown on a punt return. Sam Simmons took an interception back for a score early in the second half.

Moore began subbing early in the second half with freshman Caleb Cassidy taking over at quarterback. He said he was pleased with how they performed.

Now Moore and the Tigers can turn their attention to Northwood. The game is Thursday night at Northwood’s Jerry Burton Memorial Stadium.

Northwood, ranked No. 4 in the LSWA Class 4A poll, defeated North DeSoto 43-28 Friday night in Stonewall to improved to 5-0.

Benton is the defending district champion, but most considered Northwood as the favorite coming into this season. The Tigers defeated the Falcons 50-42 in a shootout last season in a game that wound up deciding the title.

“I think in everybody’s mind we’re the underdog,” Moore said. “But I told our guys tonight people may think that, people may say that. Here’s the deal. You have a target on your back. You won that game last year and they felt like they could’ve won, maybe even should’ve won. They certainly feel like they’re better this year than they were last year and they’ve got that year’s experience, made that quarterfinal run, went deep in the playoffs. Lot of things that lay in their favor.

“But here’s the deal. Our guys are used to winning. If they go out and give us a complete effort like they did tonight albeit against a much better football team, if we get that same sort of execution, not turn the ball over, create some turnovers, I think we’ve got a chance. We’re certainly not going to lay down and hand it to them. Nobody handed it to us the last couple of years. We’re going to fight like heck for it. We’re going to make them earn it. They may beat us. They may win this district, but they’re going to earn it from us.”

Bossier, which had about 50 players fewer than Benton dressed out, had some success running the ball after the Tigers took the 13-0 lead. But Benton’s defense bottled the Bearkats up for the most part.

Bossier faces Huntington on Friday at Independence Stadium. The Raiders (0-4) lost to Minden 35-0 in their district opener Friday night.