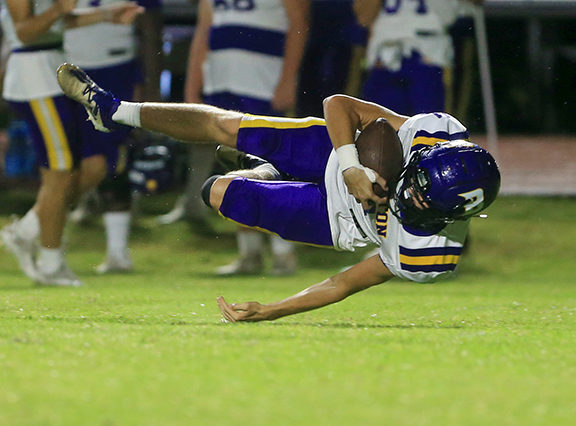 The Wooden Hippo is now in Benton after residing in Haughton the past two seasons.

In the third Battle for the Wooden Hippo, the Benton Tigers defeated the Haughton Bucs 42-21 Friday night at Harold E. Harlan Stadium.

“Finally,” Benton Head Coach Reynolds Moore said. “We started a trophy and never got to keep it at our place.”

The idea for Battle for the Wooden Hippo originated in 2019. It started when Moore had to sell a Wooden Hippo for his daughter on Facebook. He received a text from Coy Brotherton, Jason’s brother and then Captain Shreve’s offensive coordinator, joking that Jason might want to buy it. That eventually led to them deciding to let the winner of the game keep it.

But more importantly, the victory keeps the Tigers squarely in the thick of the District 1-5A race. Benton improved to 4-1 overall and 1-1 in district. Haughton dropped to 2-3 and 0-2.

“We didn’t want to put a must-win label on it but we really felt we had to go in there and win,” Moore said of the Haughton victory.

The Tigers face Byrd, which suffered its first loss of the season against Natchitoches Central 23-10 Friday night, in Week 7.

“Sitting there at 4-1 with two really big games coming up against Shreve and Byrd, two of the better teams in our district, we had to have some confidence we felt like going into those two games,” Moore said. “I feel like we did that tonight to give ourselves a chance next week now that we are starting to click and play better.”

Benton junior quarterback Gray Walters had his best game of the season, completing 18 of 22 passes for 331 yards and three touchdowns.

He passed for 169 yards in the third quarter alone when the game resembled a track meet with both teams going up and down the field.

“He freakin’ lit it up tonight,” Moore said. “Had some guys make some big catches. Pearce (Russell) made several big catches. RJ (Moore) had a big catch in the end zone. (Landon) Duggan, we finally got him loose on the edge and he got to show off his speed.”

Russell finished with eight catches for 149 yards. Moore had five receptions for 93 yards. He was also 6-of-6 on PATs and averaged 52 yards on four punts, three of which were downed inside Haughton’s 13-yard line.

After the Bucs once again got within 14 on a 9-yard pass from Colin Rains to Coleman, Stafford, the Tigers answered with a swing pass that Landon Duggan took 69 yards for a touchdown.

“And even when we scored it’d take us four or five plays and we weren’t taking a lot of time off the clock. And they were right back out there really quick. So I thought they held up really well.

After falling behind 21-0 in the third quarter, Haughton looked like it was going to make a game of it. Utilizing short passes the receivers turned into seven- and-eight yard gins, the Bucs began moving the football.

Stafford got open down the sideline, catching a 39-yard TD pass from Rains.

But Benton had an answer every time. The Bucs’ final TD, a 24-yard pass from Rains to Joshua Sewell, came after Benton took a 42-14 lead.

Penalties hurt the Bucs. They were flagged for pass interference on Benton’s first two touchdown drives and had another 15-yard one on the third.

For the second week in a row, Haughton played without leading rusher Dexter Smith. Tyler Rhodes stepped in again and gained 88 yards on 15 carries.

Rains put the ball in the air 50 times, completing 25 for 344 yardsi and three TDs with one interception.

As for Benton, Moore is looking forward to the showdown against Captain Shreve.

“I think for us to still have a shot to win the district championship we’ve got to beat Shreve next week,” he said. “I think the district champ will have one loss. I really think that’s likely. If we can go in there and pull off what I’m sure everybody will see as an upset next week I feel like we have a chance to stay in the hunt because obviously that would mean one team is still undefeated at that point. Shreve and Natchitoches are still undefeated and we still get a shot at both of them. That’s always good.”

So is having possession of the coveted Wooden Hippo.