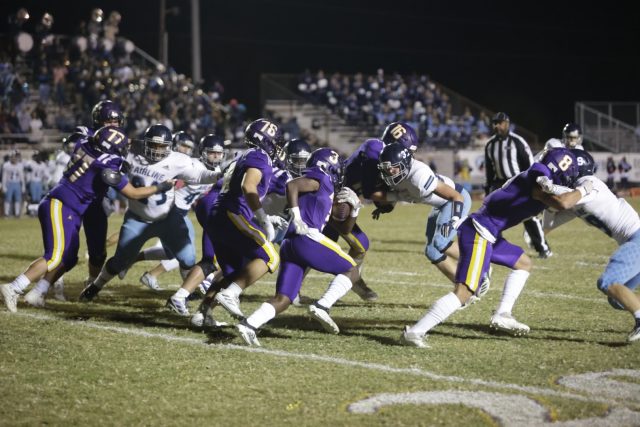 After two tough losses to Airline in their two seasons in District 1-5A, the Benton Tigers finally go over the hump Friday night with a 28-7 victory at Tiger Stadium.

“Man, we needed that one,” Benton Head Coach Reynolds Moore said. “That was good. Finally got ‘em.”

Two years ago, Benton had the lead late in the third quarter only to see Airline rally for a 29-16 victory. Last season, in one of the best games of the year, there were five lead changes in the second half before the Vikings pulled out a 31-28 win.

Airline dropped to 1-8 overall and 1-5 in district, but Moore said the fact the Vikings have struggled this season in no way diminishes his team’s accomplishment.

“I think it’s a big deal,” said Moore, whose Tigers improved to 6-3 overall and 3-3 in district. “People look at that and say, ‘Airline’s a 1-7 team, 1-8. They’re not very good.’ But No. 1, they are pretty good. A lot of young guys playing, and they’re doing well. And No. 2 is that they’re going to play us as a rivalry really hard anyway. Our guys answered the challenge tonight.”

It was certainly more difficult than the final score indicated.

The Tigers defense turned back three serious Airline scoring threats in the first half.

The final one came with just six seconds left. The Vikings were on the verge of cutting a 14-0 deficit in half, facing fourth-and-goal at the 2. But Sawyer Simmons kept Airline off the board with an interception.

“Sawyer Simmons made a great play there at the end to pick it off,” Moore said.

Simmons also intercepted a pass in the third quarter that set up the Tigers’ third touchdown,

Airline freshman quarterback Ben Taylor had to leave the game with an injury after the play after taking a hard hit trying to get to Simmons.

Taylor gamely returned to the game later. He remained on the sideline, though, after being hurt again with the Vikings backed up to their end zone.

Ladarius Epps replaced him, but he, too, left the game with an injury.

Preston Doerner came in and completed a 22-yard touchdown pass to Daxton Chavez to get Airline within 21-7 with 4:41 left in the third quarter. But the Vikings only had one other serious scoring threat after that.

Junior receiver Pearce Russell, who had a 74-yard reception and a one-handed grab that set up the Tigers’ final touchdown, had four catches for 148 yards. He set the school single-season yardage record with 920 in just eight games.

Moore had high praise for Andy Lim, who had five catches for 82 yards.

“Andy Lim played really well blocking,” Moore said. “He told me after the game, ‘I think I doubled my output for the season.’ Had two big third-down catches and two big go-route catches. That’s not really his game, but he’s pretty versatile.”

Despite the victory, Benton dropped to No. 19 in the Class 5A power rankings. The top 16 teams in the final rankings host first-round playoff games.