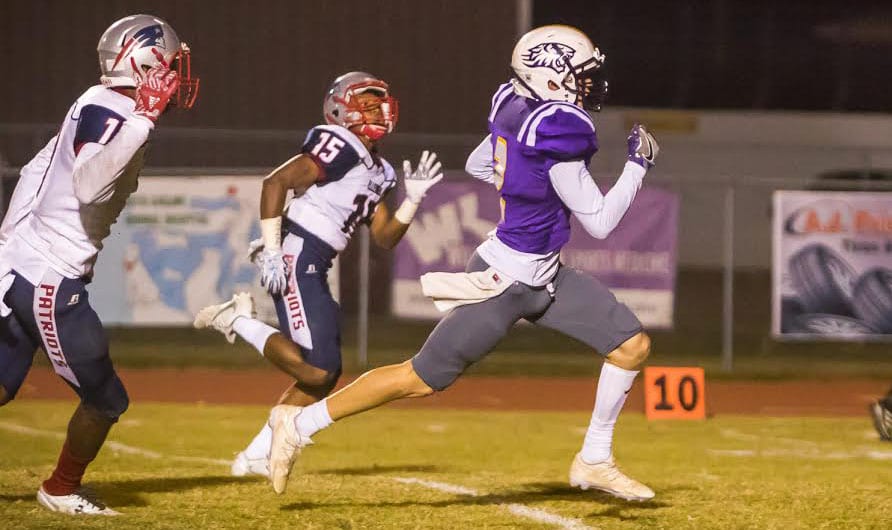 The Benton Tigers advanced to the Class 4A quarterfinals for the second time in three years with a 28-14 upset of No. 7 seed Rayne Friday night in Rayne.

Benton coach Reynolds Moore credited his defensive coaches with coming up with a plan to slow down Rayne’s Wing-T offense.

“We felt like we had a chance to stop their offense,” he said. “We made some adjustments from what we normally do. We put some guys in different spots. Coach (Scott) Carroway, coach (Tim) Cram, coach (Scott) Reeder and coach (Don) Bihm did a great job of putting in the game plan and preparing our guys for it.”

Another key to the victory, Moore said, was the performance of the Tigers’ kickoff and punt teams.

“Our kickoff team and out punt team did a great job of flipping the field and making sure they had to play on a long field,” he said “We did a really good job there. I can’t say enough about that.”

A large contingent of fans also made the 240-mile trip from Benton.

“It was almost like a home game for us,” Moore said. “It was a great, great atmosphere.”

Rayne got off to a fast start, driving 80 yards on its opening possession for a touchdown.

But the Tigers soon showed it might be their night. One play after the Wolves had a big play erased because of a holding penalty, Jayree Anderson forced a fumble. Sam Simmons scooped it up and raced about 50 yards for the touchdown.

Benton’s defense then came up big again, stopping the Wolves on a fourth-and-1.

Hable led the Tigers down the field, completing several passes en route to a first-and-goal at the 10. On fourth down from the 3, Hable scored and Benton took the lead for good at 14-7 after Brooks Cram’s second PAT.

“We were kind of able to move the ball at will on that drive,” Moore said.

The Tigers defense then stepped up again late in the first half, stopping the Wolves at the Benton 1 as time expired.

Rayne used its final timeout with 8 seconds left after Benton tackled Damien Harmon for a 6-yard loss on second-and-goal from the 8. On the next play, the Tigers stopped Harmon again just shy of the goalline.

“Our guys stepped up and made a play,” Moore said. “That was huge right there on the 1-yard line to go in the half with that momentum and then get the ball back,” Moore said.

On Benton’s first possession of the second half, Hable hit a pass that got the Tigers inside Rayne territory. After an incompletion on third-and-9 at the 40, Benton lined up in punt formation.

But Jermaine Newton took the short snap, made one tackler miss with a spin move, and sprinted to the end zone. Cram’s third PAT gave the Tigers a 21-7 lead.

Rayne’s strenght was running, but the Wolves weren’t afraid to throw it. After Benton pinned them back deep in their own territory with a punt, they overcame a holding and personal foul penalty with a long pass deep into Tigers territory.

A roughing the passer penalty moved the ball to the Benton 12 and Trent Winsbush scored from there, cutting the lead to 21-14 late in the third quarter.

Benton answered though, driving from its 36 to the Rayne 32. Hable hit a couple of passes, including one to John Westmoreland that converted a third down.

Hable also ran for a first down. On third-and-5 from the 32, Hable sprinted up the middle for a touchdown and the Tigers led 28-14 early in the fourth.

The Tigers and Wolves played the first three quarters with a line of thunderstorms bearing down on the stadium from the west. When then rain came they were able to continue play for a little while but finally, with 9:18 to play, lightning forced a delay.

When play resumed after about 30 minutes, the Tigers had a first down at the Rayne 40. They moved inside the 5, but two false start penalties in a row forced a failed field goal attempt.

The Wolves drove into Benton territory, but Jackson Mathews put pressure on the Rayne quarterback, forcing a lob pass that Johntavious Johnson intercepted with 4:13 left in the game.

Benton was able to pick up two first downs on Hable runs, including one on fourth-and-short, and run out the clock for the victory.