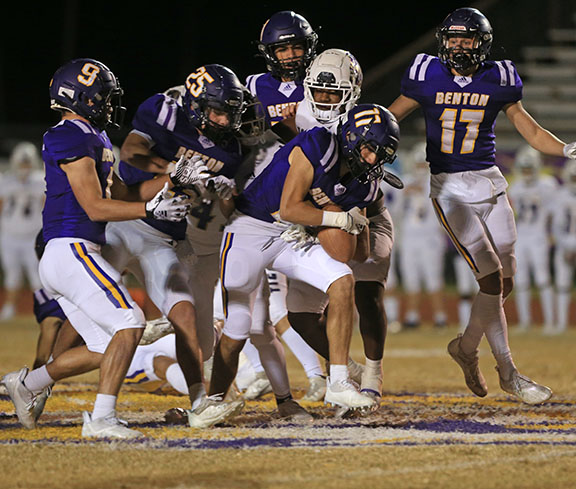 Benton Head Coach Reynolds Moore thought Friday night’s Class 5A first-round playoff game between his Tigers and the Hahnville Tigers had the potential to be a classic.

“Win or lose — obviously you want to win — but win or lose I think this is going to be a game our kids look back on in 20 years — and our coaches and our fans — and (say) man, what a heck of a game. I thought it was going to be what it was and I’m glad we came out on top.”

Benton made school history in more ways than one in the 38-31 victory at Tiger Stadium.

It was the Tigers’ first home playoff game and victory since moving my up to Class 5A in 2019.

Benton is seeded No. 12, nine spots above Hahnville. But that’s a bit deceptive. Had Hahnville opponent De La Salle not had to forfeit seven wins, the Tigers from the New Orleans area would have likely been seeded near Benton.

Both teams made comebacks Friday. After falling behind 14-0, Benton outscored Hahnville 31-6 to take an 11-point lead.

But Hahnville got within eight on a field goal and tied it at 31 on a touchdown run and Simmons’ two-point conversion run with 5:28 left.

Ethan Johnson then stepped into the spotlight.

He caught the ensuing kickoff at the 4, sprinted up the middle and went 96 yards to the end zone. One Hahnville player might have grazed Johnson with his hand as he raced by, but he was otherwise untouched.

“He hit full speed quickly,” Moore said. “And I don’t think he let his foot off the gas. He just kept going.”

Hahnville then moved to a first down at the Benton 30. That’s when Benton’s defense, which had been on the field a lot in the fourth quarter, came through.

Three Hahnville plays resulted in the loss of one yard, forcing a fourth-and-11.

“We called a time out and it was like, hey, we’ve got to get one more stop,” Moore said. “They had been running it well but we had them backed up fourth and long. We had to make a tackle. That guy rolled out to throw it. We popped him right there and he tried to run it. Then we finally tackled him. I think that was one of the only times all night we tackled him on the first try.”

Aaron Echols made the first hit on quarterback Donovan Friloux. Then Cole Weir came up fast and made a sure tackle for no gain. Benton took over with 48 seconds left. Quarterback Gray Walters took a knee three times to run out the clock as Hahnville used its final two timeouts.

“Our guys played their guts out and did it for 48 minutes,” Moore said. “We had probably 10 kids with strep this week. One of them is in (the locker room) sick as a dog after the game and just laid it out there for the whole game for us.”

Special teams played a big role in the victory.

Hahnville dominated early, scoring on a 58-yard pass and an impressive drive led by the running of 6-foot-2, 235-pound Cincere Simmons, to take the 14-0 lead.

Pearce Russell then gave Benton a huge boost, returning the kickoff 80 yards for a touchdown.

Benton recovered a fumble on the kickoff at the Hahnville 25. Benton converted a fourth-and-1 on a Greg Manning run. Then Manning sliced through a hole opened by the left side of the line and went 14 yards for the touchdown.

Hahnville, which ran out of both a spread-type formation and a power running formation with a back taking the shotgun snap, answered with a 71-yard touchdown drive. The PAT was missed.

With Manning doing much of the work, Benton drove deep into Hahnville territory. On fourth-and-13, Walters completed a 12-yard pass to Russell. Manning, who had a TD catch on a screen pass erased by a penalty, picked up the first down and later scored on a 3-yard run.

A career-long 40-yard field goal by Moore, who also had a catch at the Hahnville 5 that set up a TD, in the third quarter made it 24-20. Benton then recovered its second onside kick of the game.

The first came on the opening kickoff and Benton failed to capitalize. This time the Tigers did.

Walters picked up some good yardage on runs and completed a screen pass to Manning that kept the chains moving. Walters hit Russell for a TD from 7 yards out, giving the Tigers the 31-20 lead.

That completed Benton’s 31-6 run that started with Russell’s kickoff return.

“There was a point where Coach (Terrence) Smith was going in the headset, hey, we’re outplaying these guys,” Moore said. “We’re better than them right now. And we just have to keep pouring it on.”

Hahnville did most of its damage on the ground in the power formation. Simmons, who wore No. 97 and also played defensive lineman, took the shotgun snap and was a challenge to bring down. K’Jon Smith also picked up big chunks of yardage.

“Credit to them,” Moore said. “They just lined up and ran it down our throats. Just took them a long time (to score).”

“Instead of running at (Simmons), which we thought we could do, we ran away from him to try to let him chase everything down and we just tried to make him expend as much energy as possible if they were going to use him on both sides of the ball. And they did and he did a great job of running that thing.”

But when the final horn sounded, it was the Tigers from Bossier Parish celebrating on a night to remember.