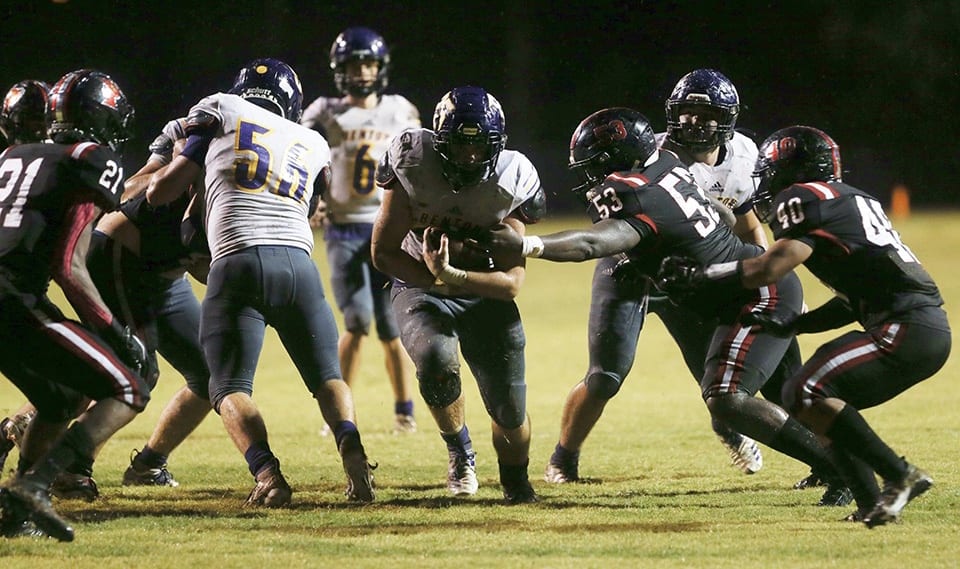 Hall scored on a 4-yard run on second down in overtime to lift the Tigers to a 32-26 come-from-behind victory over the Parkway Panthers on a wet, miserable Friday night at Bobby Marlow Field/Preston Crownover Stadium.

It wasn’t just a ho-hum 4-yard run, either. Hall, a standout linebacker who runs the ball in Benton’s power formation, had to fight through several Panthers trying their best to keep him out of the end zone.

Hall also had a 6-yard run up the middle on Benton’s first overtime play. And before that, he made a tackle behind the line that forced Parkway into a fourth-and-long situation the Panthers couldn’t convert in their overtime possession.

Hall more than made up for a lost fumble earlier in the fourth quarter with the Tigers in Parkway territory.

Benton evened its overall record at 1-1. Parkway fell to 0-2.

The Tigers tied the game with 1:09 left on a 27-yard pass from Gray Walters to Evan Cole.

EJ Washington’s blocked punt put Benton in scoring position. Cade Waites picked up the ball and scored, but a low block penalty five yards behind Waites cost him a TD.

The Panthers blocked the extra-point try and the game went into overtime tied at 26.

Parkway went on offense first. The Panthers lost five yards on a sideline pass on first down. A second-down pass to the end zone was incomplete. After Parkway was penalized five yards, Hall made the big tackle that pushed the Panthers back to the 22. A fourth-down pass sailed out of the end zone.

That set the stage for Hall and the Tigers to pull out the win.

Both defenses played well, but Benton dominated in the second half as Parkway did not come close to scoring.

The weather affected both teams’ offenses throughout, but Parkway had a very tough time in the second half. The Panthers had difficulties getting the snap cleanly to Link in the shotgun.

Penalties plagued both teams. But the Panthers were particularly hit hard in the second half.

“It was a combination,” Parkway head coach Coy Brotherton said of the penalties and offensive woes. “We had a hard time with the wet football throwing it and getting it from the center to the quarterback. Had a hard time just getting things right.

“Their front six was pretty good. They were able to slow us down in the run game. The weather conditions, the field conditions hurt us. Both teams made their fair share of mistakes. It was in the mud. It was a sloppy game.”

Walters’ 39-yard scramble that pulled the Tigers within six was the only score of the third quarter.

The weather conditions may have contributed to both offenses lack of consistency, but it didn’t prevent both from making big plays in the first half.

Parkway scored first on a 27-yard run by quarterback Cannon Link. Walters answered with a 25-yard scramble for a touchdown. RJ Moore’s PAT gave the Tigers a 7-6 lead.

It didn’t last long. The Panthers regained the lead on a 61-yard TD pass from Link to Jalun Reed. Rontavious Richmond’s  two-point conversion run put Parkway on top 14-7 with 7:59 left in the second quarter.

Benton’s second touchdown was set up by a 57-yard pass from Walters to Dane Stearns that went to the 2.

Walters rolled to his right to avoid the rush and let it fly just before he was hit at around the Benton 40. Stearns made the catch at the 15. Hall came in to score the TD. The PAT failed and Parkway still led 14-13.

The Panthers quickly extended the lead. Darriusz Patterson took the ensuing kickoff and went 87 yards for a touchdown. Benton stopped the try for two and the Panthers led 20-13.

Parkway missed a scoring opportunity on a drive to the Benton 20. The Tigers forced a turnover on downs.

But the Panthers forced Benton to punt from its 20. Parkway blocked it and Quincy Jones scored after scooping the ball up around the 10.

Benton blocked the extra-point try and Parkway took a 26-13 lead into the locker room.

Moore said he challenged his players right before halftime.

“I said, you know, talk about being Benton tough, it’s in our logo that we put on stuff,” he said. “We put it on the back of shirts but if this is how you’re going to play it’s something you put on the shirt. It doesn’t mean anything. I want to know how many tough guys we have in the locker room. That’s kind of what what where we left it at. They went out and proved it in the second half for sure.”

Brotherton, looking for his first victory as head coach at Parkway, saw some positives in the defeat.

“We’ll evaluate it and look at it,” he said. “Some things to be proud of just wish we could’ve competed a little harder in the second half. They got after us a little bit. Had a lot of heads hanging down. We’ve got to get that fixed.”

Benton was coming off a 27-26 home loss to Huntington in its season opener. Moore was proud of the way his team bounced back.

“Everybody from our kicker bouncing back to really just  everybody, just having a great week of prep, really dialed in,” he said.

Benton hosts Haughton on Thursday. The Bucs (1-1) lost to Byrd 28-10 in their second game.