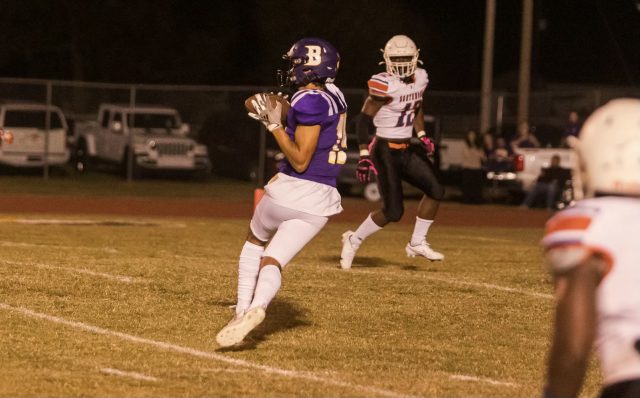 Gray Walters threw five touchdown passes and caught one as the Benton Tigers rolled past the Southwood Cowboys 50-16 in a District 1-5A game Friday night at Tiger Stadium.

The Tigers were the only parish team to win in Week 7.

In the other 1-5A game Friday night, the Airline Vikings fell to the Byrd Yellow Jackets 51-27 at M.D. Ray Field at Airline Stadium.

In a 1-3A game, the Bossier Bearkats came up just short against Mansfield, falling 14-9 at Memorial Stadium after a potential game-winning touchdown was erased by a penalty.

In a 1-1A game, the Plain Dealing Lions dropped a 28-6 decision to Arcadia on the road.

Benton improved to 5-3 overall and 2-3 in district. The Tigers are a lock to make the playoffs and are still in the hunt to host a first-round playoff game.

According to GeauxPreps.com, Benton is No. 15 in the Class 5A power rankings. The top 16 teams in the final rankings host first-round games.

“We just asked our guys to just ignore whatever their record might be,” Benton Head Coach Reynolds Moore said. “We’ve seen Southwood on film and thought they’d play hard for 48 minutes and they did. So we just wanted our guys to match that sort of intensity and put together a full game.”

“The challenge there was to come back out and set a tone again and not get complacent,” Moore said “So we finally did that. That’s one of the big things we were looking for right there.”

Walters has 19 touchdown passes on the season.

Byrd 51, Airline 27: For the third week in a row, the Yellow Jackets’ veer-option offense was too much for a Bossier Parish team to handle.

Byrd rushed for 412 yards on 42 attempts, per stats kept by Willie Young for the Byrd radio broadcast. In the last three weeks against Parkway, Benton and Airline, the Yellow Jackets have rushed for 1,345 yards.

The Vikings did hang with the Jackets early.

After Byrd intercepted a pass on Airline’s first possession, the Vikings limited the Jackets to a field goal.

But Byrd answered with two straight touchdowns, an 8-yard run by Mitchell Ramsey and a 9-yard run by Lake Lambert.

The Vikings then used two big pass completions by freshman Ben Taylor to get within three. The first was a 45-yarder to Joseph Johnson. The second was a 35-yard touchdown reception on a great effort by Cam Jefferson.

But the Jackets closed the first half with two touchdowns, including a 13-yard run by Ramsey with 10 seconds left, for a 31-14 lead.

Byrd put the game out of reach with two more touchdowns in the third quarter.

Michael Johnson and Ladarius Epps scored the Vikings’ second-half touchdowns on runs of 3 and 33 yards, respectively.

Per Byrd radio stats, Airline finished with 367 yards total offense. Jackson gained 81 yards on eight carries before having to leave the game with an apparent leg injury in the second half. Johnson had 49 yards on 16 carries.

Byrd’s Devin Strickland had a game-high 151 yards on 16 carries.

Airline visits Benton Friday. Byrd faces Captain Shreve (8-0, 5-0) with a chance at grabbing a share of the district lead.

Mansfield 14, Bossier 9: The Bearkats lost a heartbreaker after a go-ahead 15-yard touchdown pass was erased by an illegal procedure penalty.

Bossier turned in another outstanding defensive performance. The Wolverines came into the game having scored 40 or more points against their previous four opponents.

Mansfield led 6-3 at the half. The Wolverines extended the lead to 14-3 in the third quarter before the Bearkats rallied in the fourth.

Carlos Butler threw a touchdown pass to Jalen Thornton to get Bossier within five.

Cameron Carradine led the Bearkats with eight tackles. Christian Johnson had six tackles, including one for loss, and a sack.

Sedric Applewhite had four tackles, including one for loss. Bre’Lin Harris had a sack.

The Bearkats are No. 34 in the power rankings. The top 32 in the final rankings make the playoffs.

Arcadia 28, Plain Dealing 6: The Lions went into the the fourth quarter down by just eight, but the Hornets scored two touchdowns to pull out the victory.

Plain Dealing is No. 19 in the Class 1A power rankings. The top 24 teams in the final rankings make the playoffs.