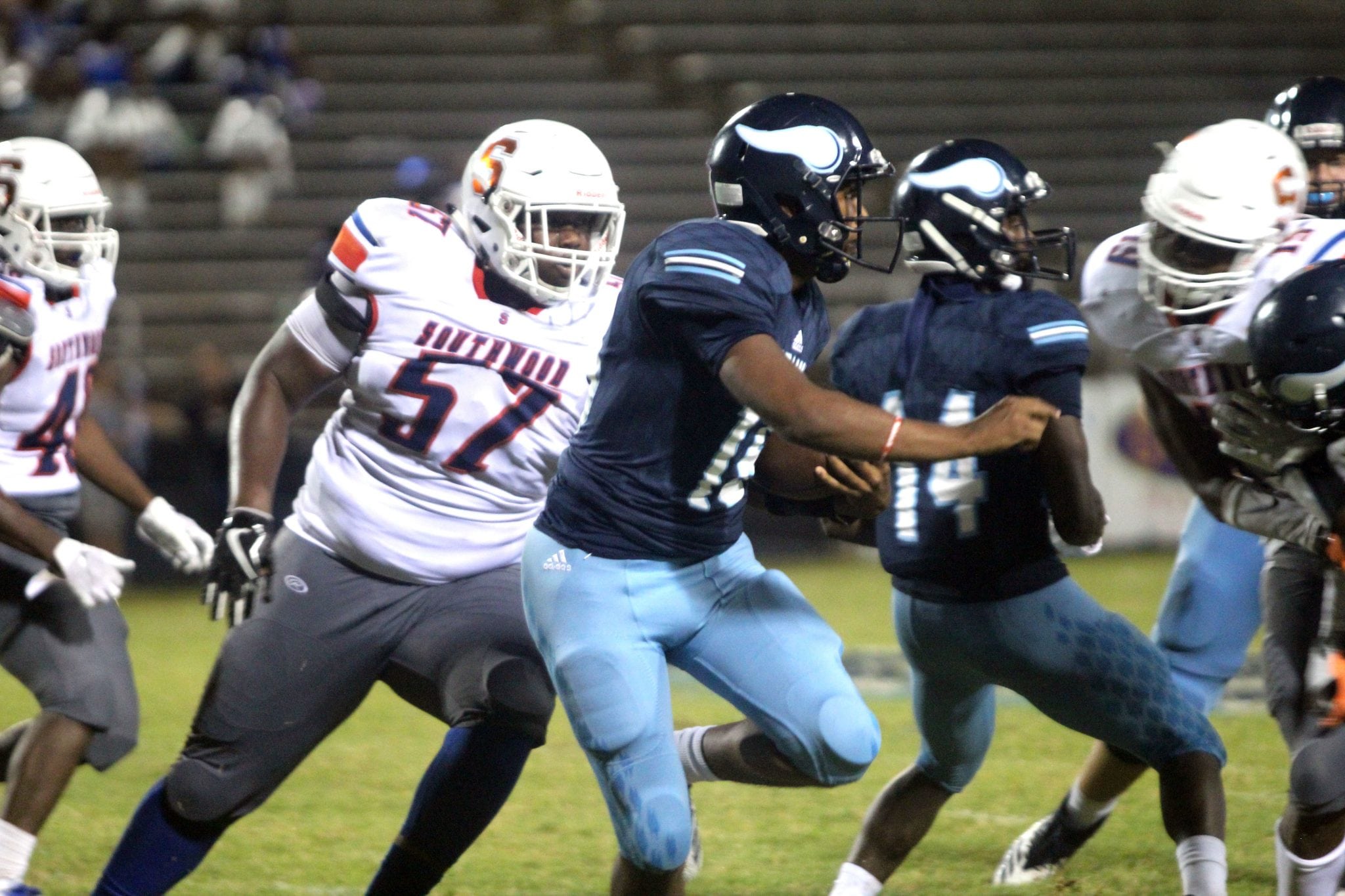 Four weeks into the high school football season, the Haughton Buccaneers are the only undefeated team in Bossier Parish.
Haughton passed its biggest test of the season so far last Friday, handing the Byrd Yellow Jackets their first loss, 42-21, at Lee Hedges Stadium.
The Bucs face an even bigger test when they take on three-time defending champion Evangel Christian on Friday night at Harold E. Harlan Stadium.
The Eagles (1-3) knocked the Parkway Panthers from the unbeaten ranks 56-20 at Evangel.
In the other District 1-5A opener, the Airline Vikings picked up their first win, 35-0, over Southwood at Airline. Airline (1-3) visits Parkway (2-1) on Friday.
Benton opened defense of its District 1-4A title with a 51-0 victory over the Bossier Bearkats at Memorial Stadium. In yet another big district game this week, the Tigers (2-2) face preseason favorite Northwood (4-0) on Thursday night at Northwood.
Bossier (1-3) will try to get back in the win column Friday against Huntington (0-4) at Independence Stadium.
The Plain Dealing Lions routed Ringgold 58-6 in their District 1-1A opener at home. Plain Dealing (2-2) plays Green Oaks (2-2) in its final non-district game Friday at Northwood.
Haughton defeated Byrd for the second straight year. The Bucs’ win last year was their first over the Jackets since moving up to Class 5A in 2011.
But Friday’s victory may have even been sweeter since it came against an undefeated Byrd team expected to be a strong contender for the district title.
“This may have been our biggest road win since we’ve been in 5A,” said Jason Brotherton, who was a longtime assistant at Haughton before becoming head coach in 2015. “It’s hard to get wins on the road in our league. Everybody’s good. When you get one on the road against a good team that means a lot.”
Haughton got several big plays on offense by quarterback Peyton Stovall, receivers CJ McWilliams and Tristan Sweeney, and running back Keyshawn Davis. Matthew Whitten also scored on a fake punt.
The defense kept Byrd’s run-oriented option offense from breaking any big plays. The Jackets had some time-consuming drives, but the Bucs made some big stops.
Haughton’s defense will face another strong running attack against Evangel, mainly in the form of Tamauge Sloan, who had more than 200 yards against Parkway.
Evangel proved it’s still the team to beat in 1-5A with despite an 0-3 start against tough competition.
Last year, Haughton played well defensively in a 31-3 loss. If the Bucs can put together another solid defensive effort and the offense continues to play well, this could be a close, interesting game.
Of course, I also thought Parkway would play Evangel close. The Panthers did stay close early, trailing 14-12. But the Eagles scored three unanswered touchdowns and led 35-12 at the half.
Sophomore quarterback Gabe Larry, making his first start in place of his injured brother Amani, performed well in a tough situation. Kobe Gill also made some big catches.
Airline made quick work of Southwood, rolling to a 35-0 halftime lead. Subs played most of the second half.
Brad Fream tossed TD passes to Kevin Pouncy, Garrison Wade and Antavious Freeman. Jamal Johnson and Pouncy scored rushing TDs.
Airline’s 1-3 record is deceiving. The Vikings had fourth-quarter leads in their first three games.
Airline and Parkway looked like evenly-matched teams. Last year, the Panthers jumped to a 21-0 lead. The Vikings rallied, but the Panthers won it 42-35 with a late TD.
Friday’s game should be another good one.
Benton will be in the rare position of underdog against Northwood. The Falcons, ranked No. 4 in the LSWA Class 4A poll, defeated North DeSoto 43-28 last week in a game some believe will decide the district title.
Last year, Benton won 50-42 in a game that did decide the title. In fact, the Tigers have defeated the Falcons four straight years.
Benton coach Reynolds Moore understands why Northwood is favored Thursday. The Falcons have perhaps the area’s best quarterback in Luke Bogan and some talented receivers.
Benton lost several veteran players to graduation that played key roles in last year’s victory. But Moore still has some who know what it’s like to play in big games.
“Lots of things lay in their favor,” Moore said. “But here’s the deal. Our guys are used to winning. If they go out and give us a complete effort like they did tonight (against Bossier) albeit against a much better football team, if we get that same sort of execution, not turn the ball over, create some turnovers, I think we’ve got a chance.
“We’re certainly not going to lay down and hand it to them. Nobody handed it to us the last couple of years. We’re going to fight like heck for it. We’re going to make them earn it. They may beat us. They may win this district, but they’re going to earn it from us.”
Benton simply outmanned Bossier. The Tigers had about 50 more players dressed out and stretched from one end of the players’ box to the other.
Benton led 13-0 less than two minutes into the game and 20-0 midway through the second quarter.
Bossier will have a good chance at another victory against Huntington, which has struggled so far.
Plain Dealing cruised to a 52-6 first-half lead against Ringgold. James Thurman said he hasn’t had a team perform better in his four-plus years as head coach.
“Like I told the kids I don’t care if it was Ringgold or who it was, we have not looked that good since I’ve been here so I’m really proud of them,” he said. “Without a doubt, that’s the best we’ve played since I’ve been at Plain Dealing.”
The Lions will face a tougher challenge against Class 3A Green Oaks, which has won two straight. But with another good performance, Plain Dealing could make things interesting.