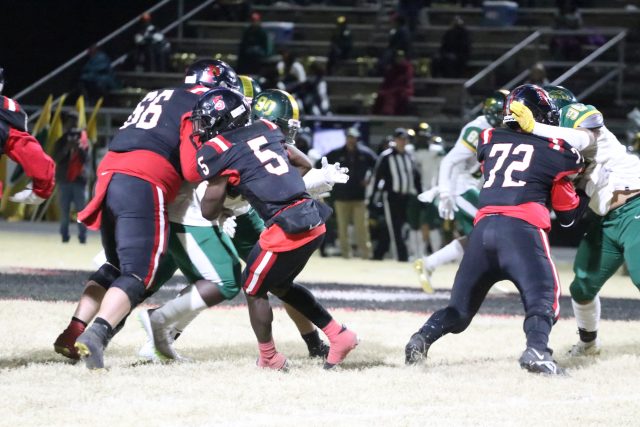 In a 46-21 regular-season loss to Shreve, the Gators’ big plays were a major factor in Parkway’s demise. In the teams’ rematch in the second round of the Class 5A playoffs, the Panthers’ scored four touchdowns of 43 yards or more.

That and a strong defensive effort resulted in a big upset. The No. 18 seed Panthers defeated the No. 2 seed Gators 30-23.

Shreve, which shared the District 1-5A title with Byrd, finished 10-2

Before the game, there was an impressive fireworks display. During it, Parkway senior Ron Richmond and junior Jaylan White provided some fireworks of their own.

Richmond scored three touchdowns in the second half.

Richmond finished with 211 yards on 25 carries, his third straight game of 175-plus yards.

White scored Parkway’s first touchdown on a 74-yard pass from Cannon Link. He had six catches for 108 yards in the game. Link completed 9-of-16 passes for 216 yards.

Aeron Burrell kicked a 22-yard field goal in the first half and made three PATs in the game.

While the long touchdown plays were obviously huge, Parkway Head Coach Coy Brotherton said the shorter runs help set them up, especially in the second half.

“Those four- and five-yard runs,” he said. “As the game goes on, I kind of feel like our two backs get stronger and their defense is getting more tired, and it does turn into bigger runs and bigger plays for us. That’s kind of been the recipe all year long and it worked again tonight,”

Meanwhile, the Panthers defense limited the Gators to three Thomas Murray field goals in the first half and led 10-9.

“That was huge,” Brotherton said. “The defense stepped up and did that for us.”

“We knew going in we couldn’t give up the huge plays — keep everything in front of us, rally to the ball,” Brotherton said.

Shreve finally put two touchdown drives together in the fourth quarter. Before Brotherton took over at Parkway last season, he was Shreve Head Coach Bryant Sepulvado’s offensive coordinator for five years. So he wasn’t surprised that Gators fought back.

The Panthers picked up a big first down on a pass interference penalty on third-and-12. But Parkway was penalized for illegal procedure on fourth-and-2 before an apparent field goal attempt. The Gators then had one final chance after an incompletion with about two minutes left.

The Panthers forced a fourth-and-6. They put heavy pressure on Terrell and his pass was almost intercepted by Ted Nelams before falling to the ground.

“It was kind of same thing as last week,” Brotherton said. “We got up 14 on ASH. It’s the fourth quarter and that clock’s in your favor. You kind of get a little softer and a little looser. But you make sure you don’t let them go 60 in one play — make them work for it — and they were able to move the ball down there and pull within seven. But we made the big stop when we needed to.”

Brotherton said the entire defense played well. But he was especially pleased with the performance of end Ray Mayweather.

“Ray Mayweather made a couple of big stops at defensive end, put some pressure on the quarterback,” he said. “Pretty excited about what he did.”