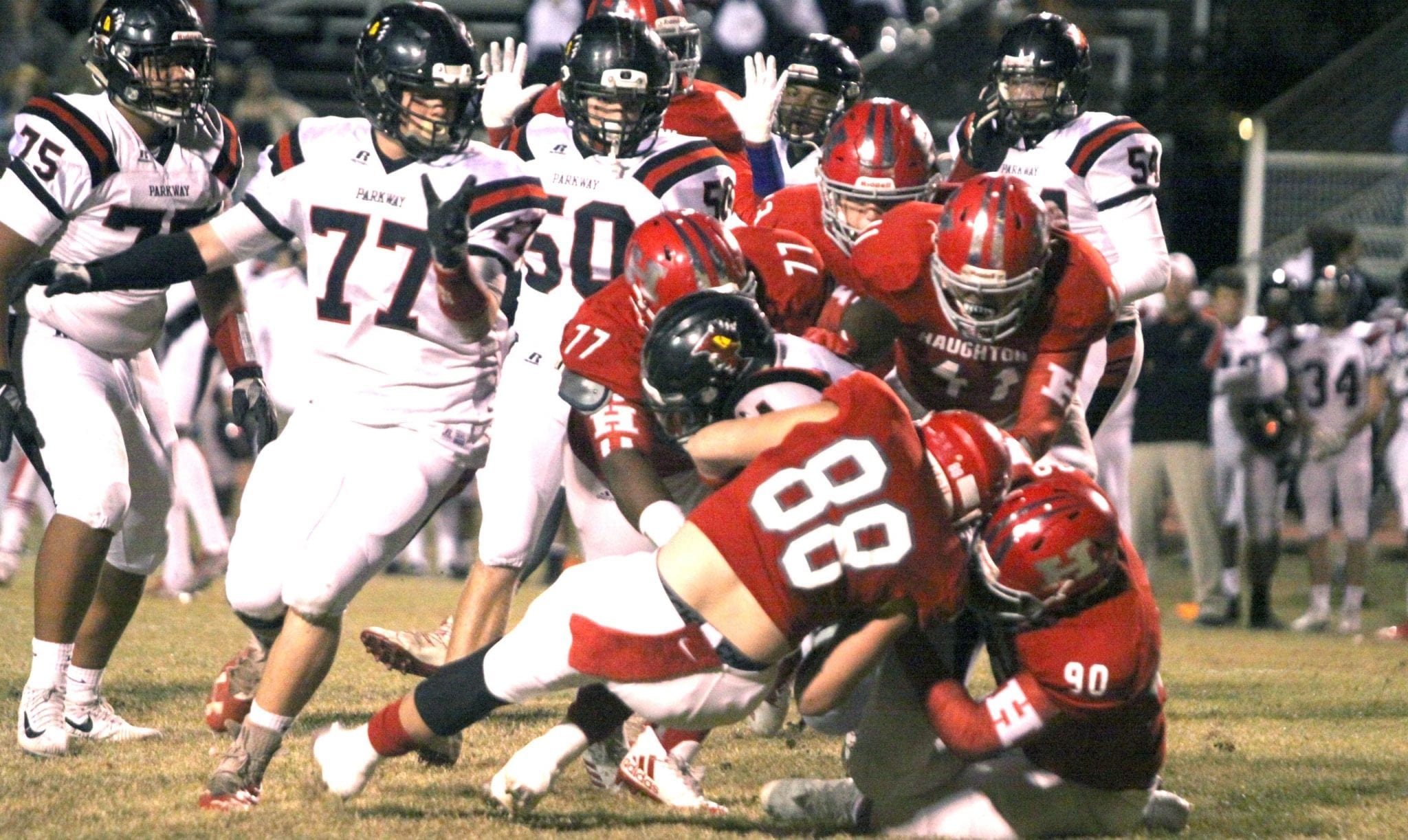 The Haughton Buccaneers pulled away in the second half for a 45-17 victory over the Parkway Panthers on a chilly Friday night at Haughton’s Harold E. Harlan Stadium.

Haughton, which has won four in a row, improved to 7-2 overall and 4-1 in District 1-5A. The Bucs also greatly improved their chances of hosting a first-round playoff game. Haughton came into the game No. 17 in the Class 4A power rankings. The top 16 host first-round games.

Parkway (4-5, 2-3) was No. 21 in the power rankings and is still in good shape to make the playoffs. The Panthers close the regular season at home against Southwood (0-9, 0-5) Friday. The Cowboys lost to Captain Shreve 46-20 Friday night,

Haughton defeated Parkway for the first time since 2011. The Bucs led 21-14 at the half and then dominated the second, outscoring the Panthers 24-3.

“We’ve been behind the eight ball on those guys for a few years now so that was a good one to get,” Haughton coach Jason Brotherton said.

McWilliams’ biggest play came just before halftime. He took a shanked punt on the bounce and ran 50 yards for a touchdown with just 16 seconds left. Korbin Schmidt’s PAT gave Haughton a 21-14 lead and a lot of momentum heading into the locker room.

McWilliams also caught a 31-yard TD pass that tied the game at 14 in the second quarter. In the second half, he returned a kickoff 78 yards and then passed 6 yards to Cameron Townsend for a TD on a throwback to the quarterback play.

“We made big plays,” Brotherton said. “We had a lot of big special teams plays.”

Haughton running back Lavonta Gipson continued his outstanding senior season. He rushed for 158 yards on 23 carries and scored on runs of 2 and 25 yards.

“Our offensive line kind of controlled the line of scrimmage,” Brotherton said.

Townsend completed seven of 12 passes for 110 yards, including a 4-yard TD pass to Tristan Sweeney. He also rushed for 68 yards on 12 carries.

The defense also did its part. Keyshawn Davis, Jalob Walker and Keyangelo Thomas all had interceptions in the second half.

“The defense played great,” Brotherton said. “We got a lot of pressure on the quarterback and eliminated them from making big plays. They got some yards, but we just kind of eliminated the big plays, hung in there and got stops when we had to.”

The Panthers played well early. They drove 59 yards on nine plays for a touchdown on their first series mostly behind the running of quarterback Amani Larry. Larry hit Chase Turner in the back of the end zone for a 12-yard touchdown.

After Haughton tied it, Parkway regained the lead on a 3-yard Larry run. A 60-yard pass from Larry to Israel Mukuamu keyed the 77-yard drive.

The Panthers’ only points of the second half came on a 31-yard Louis Espino field goal.

Larry completed 16 of 30 passes for 233 yards, but the Bucs limited the Panthers to just 58 yards on the ground. Eric Williams, Bossier Parish’s leading rusher, had 24 yards on nine carries.

“The defense was in position to make tackles and they tackled him when they had a chance to,” Brotherton said.

Williams did have four catches for 65 yards, and Turner had seven for 64.