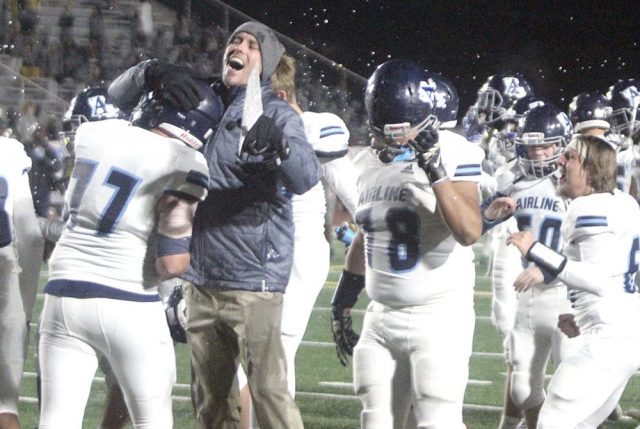 Bo Meeks has stepped down as head football coach at Airline after 11 seasons.

Meeks was diagnosed with a form of stomach cancer early in late 2018.  Treatments were successful, but the cancer returned during the 2019 season. Despite that, he led Airline to a share of the District 1-5A championship.

Since then, he’s continued treatment. He had his latest scan three weeks ago. It showed a tumor that is less than a centimeter, he said.

While that’s a positive result and Meeks is doing well, he said the medication he has to take makes it tough for him to be at 100 percent every day.

“With continued treatment the stress I put on myself and the demands to be the best that this job requires, I just feel like it’s the right time to step away,” he said. “I just can’t be 100 percent. As hard as I try, I feel like 80 to 85 percent every day. This job and the kids, they need more than that too.”

He said the decision to step down now was “a hard one,” though.

Meeks said he plans to continue coaching somewhere in a reduced role in the future.

“No head coaching, though,” he said.

Meeks replaced Mike Greene in 2011 after serving as head coach at Calvary Baptist.

Airline missed the playoffs only twice. In 2018, the Vikings went 3-7 with several close losses. The next year they defeated Captain Shreve in the regular-season finale to earn a share of the title and then advanced to the quarterfinals of the playoffs, finishing 10-3.

Airline also reached the quarterfinals in 2012 and 2017. Meeks’ overall record was 65-57. Last season the Vikings went 1-9 but Airline was competitive in most of its games.

“The Airline High School Administration and Athletic department would like to thank Coach Bo Meeks for his eleven years of dedicated service to Airline High School and the North Bossier community,” Airline principal Justin James announced in a press release.

“Airline High School wishes Coach Meeks the best of health and happiness as he begins the next chapter of his career.”

James said those interested in applying for the job as head coach should direct all inquiries, resumes and applications to Airline Athletic Coordinator Toby Todd at toby.todd@bossierschools.org.

The application deadline is Friday, March 18.