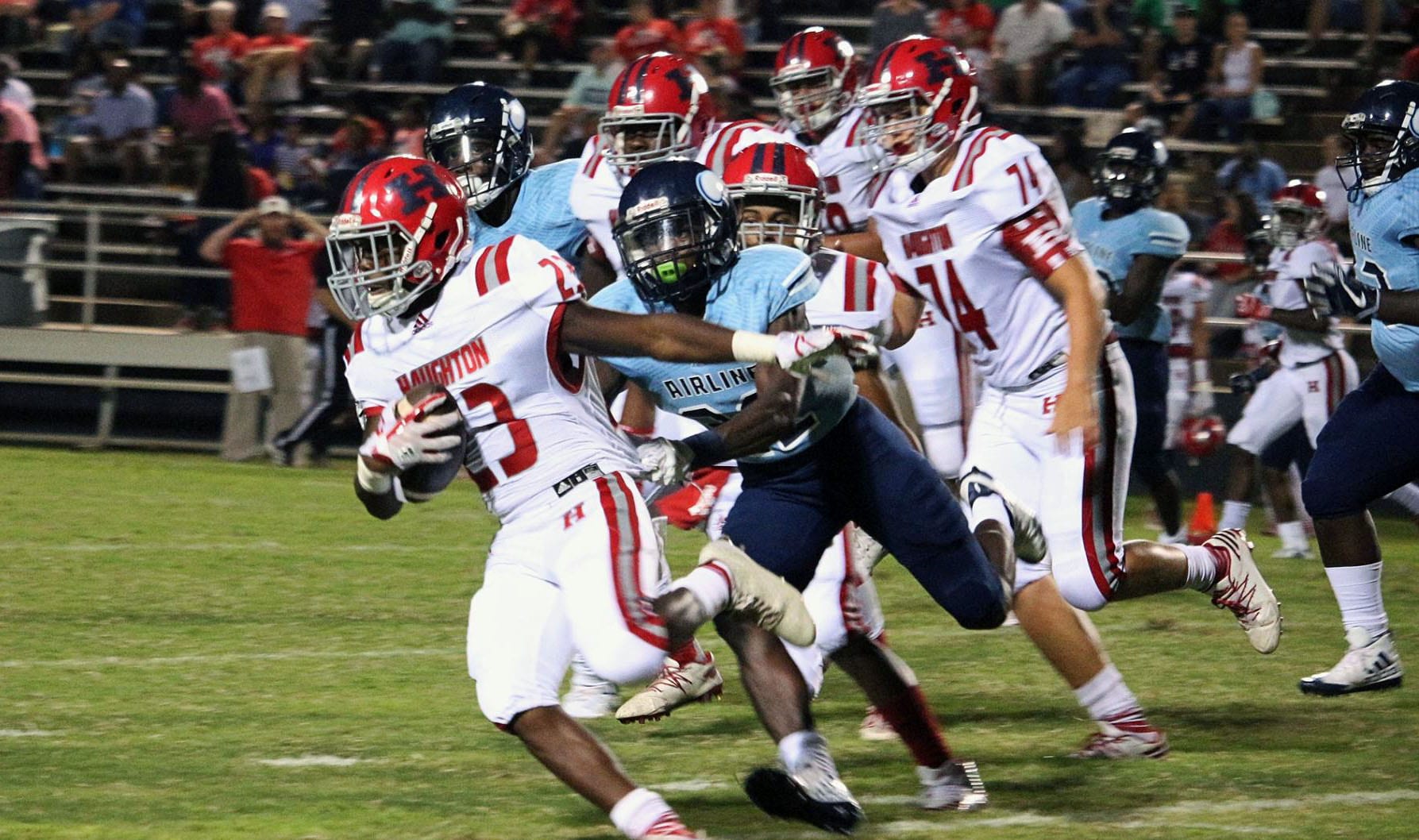 The Bossier Bearkats, Airline Vikings and Benton Tigers were victorious in the 64th annual Bossier Lions Club Jamboree on Friday night at M.D. Ray Field at Airline Stadium.
The Bearkats defeated the Plain Dealing Lions 20-14, the Vikings downed the Haughton Buccaneers 19-0 and the Tigers outscored the Parkway Panthers 23-14.
Each “game” consisted of two 15-minute halves.
Even though both teams return several playmakers from successful teams last season, Benton’s win over Parkway has to be considered a bit of a surprise. The Panthers have two players, quarterback Justin Rogers and receiver Terrace Marshall Jr., considered by recruiting experts as among the best in the nation in the Class of 2018 at their respective positions. Parkway also returns several other key players off last year’s 11-2 team.
Benton returns three of the top offensive players in the area in quarterback Garrett Hable, receiver Doyle Adams Jr. and running back Jermaine Newton off last season’s 10-3 team. All three 2016 All-Parish selections contributed Friday.
Hable threw touchdown passes of 39 yards to Bubba Osby and 27 to Adams. The latter came with 15 seconds left in the second half and gave Benton a 20-14 lead. Newton scored the Tigers’ first TD on a short run.
Rogers scored on a 37-yard run and threw a touchdown pass to Kendall Brown. Marshall caught a 40-yard pass.
Benton coach Reynolds Moore is always happy to come out ahead on the scoreboard, but he said that wasn’t his main concern coming into the jamboree.
“Here’s the deal,” he said. “I told our guys all week I wasn’t concerned about the game. I wanted to compete and I always want to win when the scoreboard’s on, but my biggest thing was that we got better and were healthy Saturday morning. That’s all I was worried about.”
It’s no secret that expectations are sky high for Parkway this season and for good reason. Moore said the Panthers deserve the hype, but he believes his team can play a little bit, too. He thought his defense did an outstanding good job against the Panthers’ explosive offense, especially on the line.
“They’ve got some great players,” he said. “But our guys came out and flat-out outplayed them, and we were more physical than they were. Our guys heard it all week from everybody at Parkway and everybody around how we didn’t have a chance.”
Even so, Moore is well aware that every team came out of the jamboree still 0-0. It starts to count for real this Friday with season openers.
“The jamboree is fine but it’s a glorified scrimmage and it doesn’t mean anything,” he said. “We don’t get a win. They don’t get a loss. My butterflies come thinking about Wossman. But to play like that … forget about the outcome of the game, to execute on both sides of the ball like that really sets the tone for our program for the season, and I think it’s a huge step forward. We’re further along on both sides of the ball than we ever have been but with this many seniors you kind of expect that, you know.”
The Tigers host Wossman in the season opener, while Parkway faces Booker T. Washington at Bobby Marlow Field at Preston Crownover Stadium.
Airline junior quarterback Brad Fream saw his first action of the preseason against Haughton. He threw a touchdown pass to C.J. George in the first half. On the drive, George caught a fourth-down pass and the Vikings converted a third-and-long situation.
Freshman Jackson Tinkis kicked a short field goal to Airline a 9-0 halftime lead. Airline scored on a 90-yard pass from Fream to Coby McGee in the second half and and Tinkis added a 29-yard field goal.
“We played a good, complete 30 minutes,” Airline coach Bo Meeks said. “I was really pleased with the effort overall, all three phases. Especially against Haughton. We always play tough games. I thought the kids came out and did a good job.”
He was also pleased with the play of Fream, who has been nursing some shoulder soreness and did not play in the two scrimmages.
“He’s had a really good offseason,” he said. “It was really good to get him back. I thought we played really well up front. We had good protection. Ran the ball well. We were able to take the pressure off of him. He did a really good job of getting the ball where it needed to be. I was real pleased and just excited about what we’re going to be able to do offensively. He had a really good command of the offense, making plays when it mattered most.”
Airline hosts Union Parish on Friday, and Haughton hosts Minden.
Bossier’s Rico St. Fleur kicked two 27-yard field goals to help Bossier get past Plain Dealing.
The Lions took a 14-10 lead at the half on Ty Thomas’ interception return on the final play.
Quarterback Isaiah Wallace-Blair and Decamerion Richardson scored touchdowns for Bossier.
Bossier coach Michael Concilio thought his team improved from the previous week’s scrimmage against Red River. He was especially pleased the Bearkats were able to maintain focus and rally in the second half.
“The key was we didn’t give up a point in the second half at all,” he said. “We moved the ball, but more importantly we really forced some three and outs in the second half and showed some good, good enthusiasm.”
Bossier opens the season against Madison in Tallulah on Friday. Plain Dealing hosts University Academy.