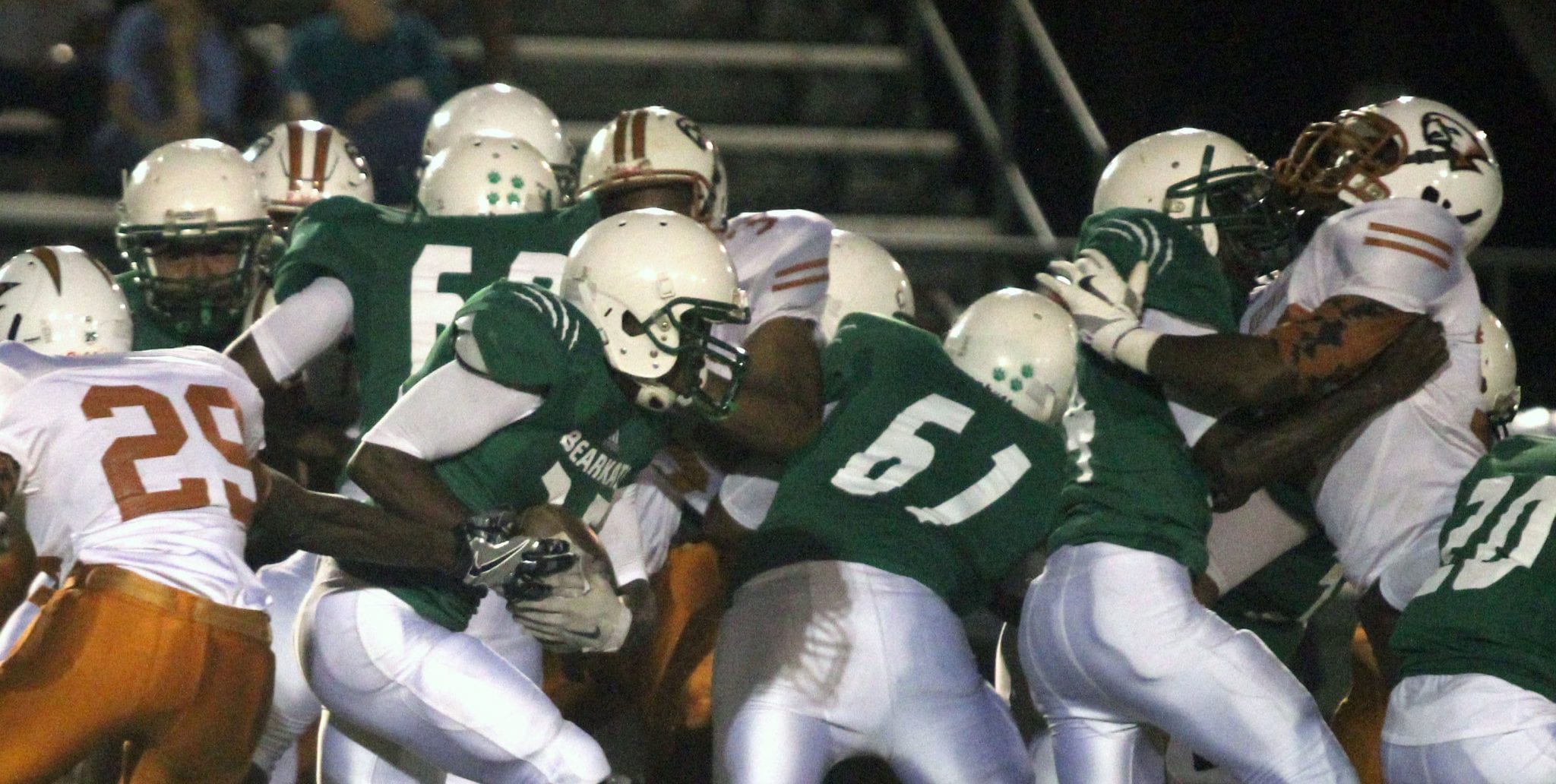 The smiles on the faces of the Bossier Bearkats as they gathered around head coach Michael Concilio told the story.

The drought was over. After building a 28-0 lead, the Bearkats hung on for a 41-33 homecoming victory over the Northwood Falcons in a District 1-4A game Friday night at Memorial Stadium.

The Bearkats had lost nine straight district games since moving from District 1-3A to 1-4A in 2015. Bossier had come close to ending the drought on several occasions, including Week 5’s 24-20 loss to Woodlawn.

“I know how hard the kids have we’ve been working, how close we’ve been — to finally be on the right end of it,” Concilio said. “A lot of people have said, ‘You know, Bossier’s been in games; they keep fighting and fighting,’ That’s what we tell our kids. If you keep fighting good things are going to happen for you. We’re very fortunate that happened for us tonight.”

Quarterback Keimun Daniels and running back Kalan Green both had big nights for Bossier. Daniels ran for three touchdowns and passed for two while also playing the entire game at defensive end. He finished with 115 yards rushing on 10 carries.

Green rushed for 179 yards on 32 carries and scored a touchdown.

Bossier dominated the game through the first two and two-thirds quarters. Daniels ran the Wing-T to perfection and helped his team built the 28-0 lead with 4:52 left in the third quarter.

The Bearkats have several two-way players and are battling some injuries. That began to take its toll as Northwood quarterback Peyton Bogan started heating up.

Bogan almost brought the Falcons all the way back. The Bearkats had only one turnover in the game, but it came with about three minutes left and was deep in Bossier territory.

Northwood took advantage, scoring with 2:24 left to cut Bossier’s lead to 34-33. The Falcons, who missed their first PAT after their previous TD, lined up to kick the extra point for the tie. After a timeout, coach Jim Gatlin decided to go for two.

Bogan rolled to his right but the Bearkats had the receivers covered. He then threw back across the field. The pass was too short and fell incomplete about 2 yards shy of the goalline.

Northwood’s onside kick didn’t go 10 yards. The Bearkats got a couple of first downs and Northwood had no timeouts. Bossier likely could’ve run out the clock, but the Bearkats scored and kicked the PAT for the 41-33 lead with 56.9 seconds left.

Bogan smartly led the Falcons down the field, spiking the ball on a couple of occasions to stop the clock. Northwood had a final play at the Bearkats 5 with about 7 seconds left. But Reginald Burns intercepted the ball at the goalline and time expired.

With hindsight, Concilio said the Bearkats probably shouldn’t have scored that final TD. But it all worked out well in the end.

“We kind of laid down there for a little bit but thank God we started picking it up when the time counted,” he said. “I’m excited about it, man; it’s a big win for our kids. No doubt about it.”

Bossier’s Tyron McCoy made two big defensive plays. The first was an interception that he returned inside the Falcons 10 late in the first half. Bossier capitalized with a touchdown and two-point conversion to take a 20-0 halftime lead.

Early in the third quarter, McCoy recovered a fumble that led to Daniels’ third TD and the 28-0 lead.