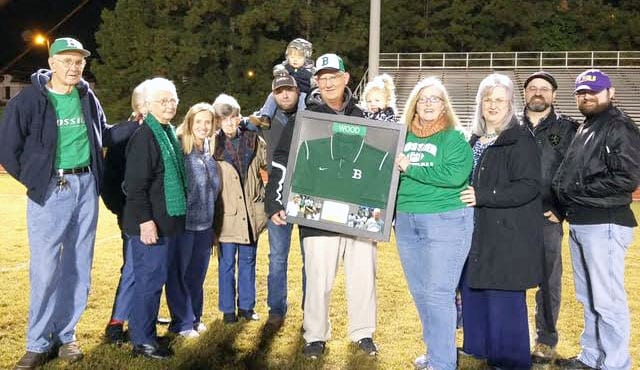 The Bossier Bearkats wrapped up the 2018 season Thursday night with a 56-28 loss to third-ranked and undefeated Northwood at Jerry Burton Memorial Stadium.

The Bearkats finished 1-9 and 0-7 in District 1-4A. Northwood heads into the playoffs 10-0, including a district mark of 7-0. Northwood head coach Jim Gatlin, a longtime coach in Bossier Parish before going to Northwood, led the Falcons to the first undefeated season in school history.

Bossier honored longtime assistant coach Allen Wood, who is retiring after this school year, after the game. He was presented with a framed coaching shirt that include several photos of him coaching.

Wood began his career as an educator and coach at Ringgold, where he spent a spring semester. He then coached at Montgomery High for one year followed by a one-year stint at Rusheon Middle School.

Wood then moved to Bossier High, where he spent 10 years. He followed that with nine years at Parkway before he returned to Bossier, where he’s spent the last 10 years as an assistant football coach. He is also the head girls soccer coach.

While Bossier, like almost every other team on the Falcons’ schedule, couldn’t stop Northwood’s powerful offense, the Bearkats generated some offense and had a big play on special teams.

Daniel Moore closed out his career with 224 yards on 14 carries. He had an 85-yard touchdown run and a 69-yard run that set up Michael Green’s 1-yard TD plunge. Moore also returned a kickoff 97 yards for a touchdown, giving him 321 all-purpose yards.

Green rushed for 71 yards on 12 carries. Roderick Francis ran 35 yards for a touchdown on his only carry of the game.