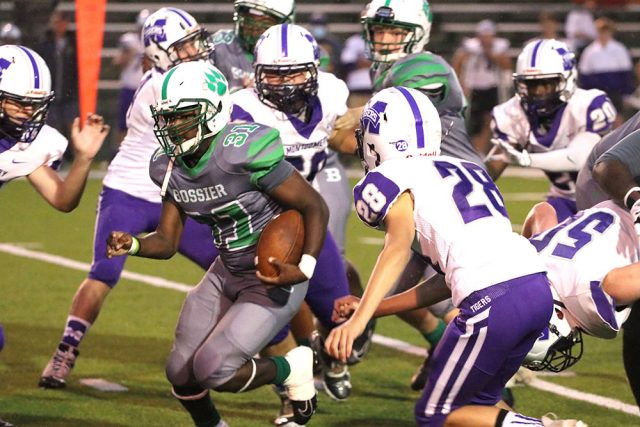 The Bossier Bearkats took care of business on homecoming night Friday, rolling past the Montgomery Tigers 66-6 in a non-district game at Memorial Stadium.

Montgomery (1-4) is a Class 1A school and the Tigers’ only win was by forfeit. They were simply overmatched and overwhelmed against Bossier.

“By numbers we’re the bigger school so it was kind of to be expected,” Bossier Head Coach De’Aumante Johnson said. “The guys came out and played well. Still a lot of gray areas in a lot of spots. We’ll clean it up though. Especially on special teams, that’s something I’m very big on.

“And we’re going to have to work extremely hard on to be a championship team. Overall, the guys came out, they played well. I think it gave them a little more confidence also. You can’t just take it away from them.”

Johnson was pleased with how the Bearkats bounced back from last week’s 42-6 loss to North Caddo. He said that game taught him, his coaching staff and players a valuable lesson.

“Last week was real tough, extremely tough on the players, extremely tough on the staff,” he said. “That game was an eye-opener for us. With them punching us in the mouth like that I think it really did open our eyes and let the players know, hey, we’re not invincible; we can be hit. It really did help us out a lot to prepare for this upcoming game and the rest of the season to be honest.

“That game right there was a game that we needed. And I called the coach over there at North Caddo and told him thank you for punching us in our mouth like that because I told my kids you have to learn how to handle success and everything. When you win you have to learn how to handle success to get ready for the next opponent, something I’m always preaching about. We needed that one last week, the coaching staff and the players, all of us.”

Needless to say, Bossier put up some impressive offensive stats against Montgomery.

Carlos Butler didn’t throw much, but he completed five of nine passes for 89 yards. He also scored a rushing TD.

Tykeem McDonald led the defense in tackles with five. Sedric Applewhite had three tackles, including one for loss, one sack and one forced fumble.

Christian Johnson and Christian Serrano had three tackles each.

Rashon Tramiel returned an interception for a touchdown and had a pair of tackles.

Juan Guardiana recovered a fumble and had two tackles. Joseph Manning returned a fumble for a touchdown.